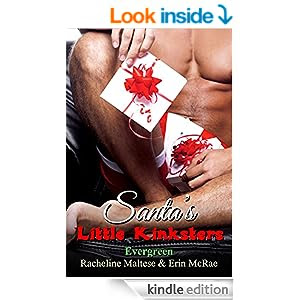 When bisexual polyamorous TV star Liam Campbell returns home to New York City for the holidays he finds out his best friend (with benefits) Charles Ortwin has recently acquired a serious boyfriend.

Thrown by not being the center of everyone's attention, Liam seeks out advice from various lovers and friends. each of whom are tied up with their own sensual pleasures.

When a holiday party ends in a series of arguments between Charles, the new boyfriend, and Liam, it takes a snowy Christmas, a bit of honest communication, and some delightful sexual agony to put everything back as it should be.

An interracial, bisexual, polyamorous, Hollywood, holiday romance.  What happens when a former child star goes home for the holidays?


When Liam gets back to his room Charles is asleep in his bed, at least somewhat undressed judging by the sweater and socks that are scattered on the floor. Liam sighs, but at this point he’s more amused than annoyed at the presumption. After everything that’s been fucked up about tonight, and even with everything they’re apparently going to have to talk about tomorrow, Charles passed out in his bed is comfortingly normal.
So Liam strips, and crawls into bed next to him, and leans over to turn off the light before wrapping an arm around Charles’ side and snuggling close. Above them, the stars on the ceiling glow.
When he wakes up in the morning, though, things feel complicated in that way Liam’s not used to, not with Charles. Charles is still asleep, his arm thrown over his head on the pillow, and Liam traces the long tendon in his wrist with a finger while he waits for Charles to wake up. While Liam’s still not sure that Victor’s right about Liam’s marriage being the trigger for Charles’s bullshit or even right that Liam and Charles are dating, he is right that they need to talk about it.
Finally, Charles stirs, and opens a bleary eye when Liam runs his whole palm along his arm. “What?” he asks, lifting a hand to rub his eyes and then squinting them shut again.
“Are you my boyfriend?”

ABOUT Racheline Maltese & Erin McRae
Racheline Maltese co-writes the Love in Los Angeles LGBT romance series with Erin McRae. Set in the film and television industry, the books (Starling (September 10, 2014), Doves (January 21, 2015), and Phoenix (June 10, 2015)) are available from Torquere Press. Their May/December "gay for you" novella Midsummer will be released Summer 2015 by Dreamspinner Press. You can also find their work in Best Gay Romance 2015 from Cleis Press.