We're getting Down & Dirty with MFRW Author Meredith Bond.
Meredith is an award-winning author of a series of traditionally published Regency romances and indie-published paranormal romances. Known for her characters “who slip readily into one’s heart”, Meredith’s paranormal romances include Magic In The Storm, Storm on the Horizon, and the short story “In A Beginning”. Her traditional Regencies include The Merry Men Quartet of which An Exotic Heir and A Dandy In Disguise have recently been republished.

Welcome Meredith. Tell us, generally, how long does it take you to write a book?

It takes me around five months to write a book from plotting through editing.

Do you have a set schedule for writing or do you just go with the flow?
I write every afternoon – or at least that’s the goal, and pretty much, I stick with it.

Meredith also teaches writing at her local community college. If you want a taste of her class in book form, Chapter One is available at your favorite e-retailer.

Tell us about your latest book, including its genre. Does it cross over to other genres?
It covers too many genres! It’s a New Adult Medieval Fantasy Romance. I get tired just writing all that out every time.

I love the New Adult genre. It’s actually what I’ve been writing for years, only they were called “traditional Regencies” when I first wrote them. LOL! Now I’ve got a new one with early 20-somethings who are trying to find themselves amidst the chaos of destiny coming to call and an evil power-hungry Lady Nimuë who is trying to take over Britain.

So, I’ve got New Adult – 20 somethings trying to figure out who they are.  I’ve got Medieval – it’s set 200 years after King Arthur’s death and has Lady Nimuë, the Lady of the Lake as the villain, Lady Morgan le Fey plays a role, as does Sir Dagonet, a knight of the Round Table (actually, he plays a very large role). Merlin pops in a few times as well. It’s a Fantasy – magic! Loads of magic and fun. And it’s a romance. Each book in the trilogy features one of the trio of lead characters in a romance and they all end happily ever after.

How do you come up with story ideas?
I came up with the idea for the Children on Avalon because I was trying to discover the beginning of the world I created in my Regency Paranormal Romance, Magic In The Storm. I created a world where there are a magical people called the Vallen who have magical abilities with which they help ordinary people. So anyone extraordinary (think Einstein, Benjamin Franklin, Shakespeare) are actually Vallen.
I knew that Morgan le Fey and Merlin had to play a role because I love them so much, and I knew that the world had to begin with younger people trying to learn who they were. It just built from there. As with many of my books, I started with the characters and created a story around them.

What are your thoughts on love scenes in romance novels?
I love love scenes that are passionate and romantic. I don’t need to have all the body parts described, I know what they are. Most of all they need to pluck at my emotional strings and usually they lead to some conflict.

What does your husband/wife think of your writing?
My husband reads just about everything I write. Admittedly, he doesn’t love the paranormal so much as the historicals, so he’s a little behind on this current series. But he’s extremely supportive of my work.

Do you ever ask him/her for advice?
Always. He’s great at analyzing my work for character consistency, plot holes and just what works and what doesn’t.

Who, if anyone, has influenced your writing?
Georgette Heyer started me writing – I grew up reading her Regencies. Julia Quinn showed me what great characters can do for a story and just how important they are.  Mary Jo Putney taught me to love the modern Regency novel and now she’s writing paranormals too that are fantastic.

What can we expect from you in the future?
I’ve got much, much more to come! Way too many books, in fact. LOL!

After the Children of Avalon series is published (March, April and May, 2014), I’m going to get started revising and editing the two traditional Regencies to which I just got my rights back from Kensington Publishers. Then I’ve got another Regency I started a few years ago when I wrote a “Book In A Month” which will build on the characters in A Dandy In Disguise (one of my traditional Regencies which I re-released last year). And then more to come in my Vallen world. As I said, too many books!

How do we find out about you and your books?
You can sign up for my newsletter at my website. And I blog on the topics of writing and self-publishing every weekend.

Do your fans' comments and letters influence you in any way?
Absolutely! In fact, as soon as I’m done writing Fire (almost there!), the third book in my Children of Avalon trilogy, I’m going to take a break and write a short story specifically requested by my readers who read Storm on the Horizon and then Magic in the Storm. They needed a bit of a bridge between loving my heroine in SOTH, Tatiana to understanding how she became the villain in MITS. So, that’s up next for me.

Do you have a favorite comment or question from a reader?
I had a reader write to me after she received my last newsletter. She loved it so much, she said, that she forwarded it to six of her friends! Now that’s a fantastic fan!

Do you have a favorite author? Favorite book? Favorite series?
Too many. My favorite book of all time is The Princess Bride by William Goldman. Right now I’m really enjoying Patricia Briggs’ Mercy Thompson series – slowly making my way through them. And I love Kerrelyn Sparks Vampire series – so much fun, she’s an auto-buy for me.

And, the best question of all... if you came with a warning label, what would it say?
“Silly geek who loves to laugh. Handle with care.” 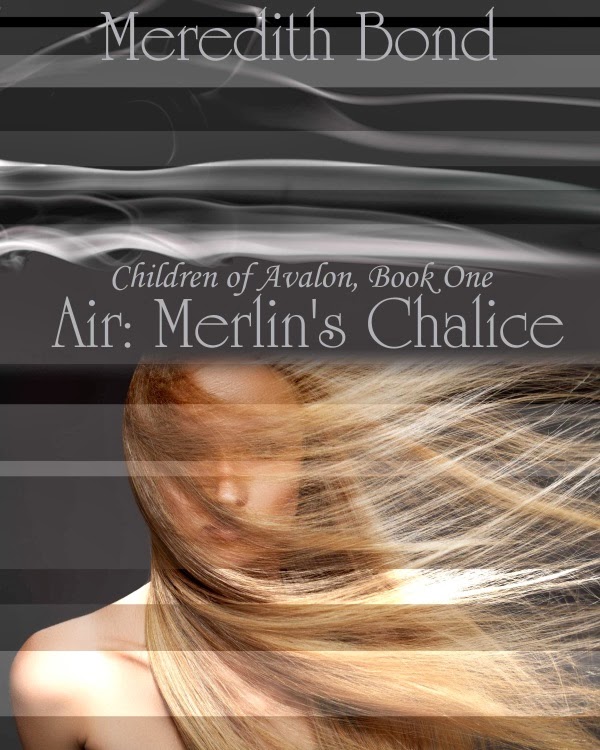 Blurb: In one day Scai has gone from being considered just unusual by the people of her little Welsh village to an outcast fleeing for her life. Left on the church steps as a baby, she knows nothing of her history—or her abilities. Did she really stop the rain just by wishing it to stop? But she is determined to learn all she can. Travelling alone to find her family seems to be the only way she’s going to find the answers she seeks.

Her journey leads her to the comical old knight Sir Dagonet, who tells her that she is one of a magical people called the Vallen. Together they continue on, joined by the handsome Dylan and the fiery Bridget on a new quest—to find the fabled Merlin’s Chalice, said to hold all the power of the entrapped wizard. Together, Scai, Dylan and Bridget discover that they are the long awaited Children of Avalon, destined to save the world from power-hungry Lady Nimuë—unless she kills them first.

Along the way, Scai finds magic—both in the wind and air that she can control at will, and in the sweet ache of a first love that she cannot.