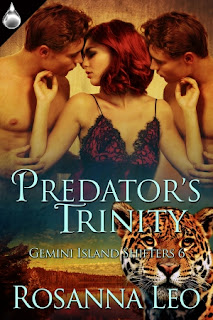 Librarian Suzan Marsh is an empath who has always felt assaulted by the feelings of others. She has had to distance herself from the people in her life, raising a mental barrier to ward off unwanted emotions. When wolf shifter August Crane abducts her, he breaks through the walls she constructed, forcing her to accept a frightening new truth.

When Crane drags Suzan into his cult and decides to make her his “concubine,” Percy and Byron know they must save the human woman. Their connection to her is strong, and they cannot deny the dream they always held close. That they could share a woman and make her their mate.

But even after rescuing Suzan, none of them are free from Crane’s clutches. The wolf shifter has plans, ones that involve the demise of every shape-shifter at the Ursa Resort. Not only must Percy and Byron keep Suzan safe, they must convince her to accept them both. In order to stop Crane from hurting everyone they love, they must learn to fight together.

From Toronto, Canada, Rosanna occupies a house in the suburbs with her long-suffering husband, their two hungry sons and a tabby cat named Sweetie. When not writing, she can be found haunting dusty library stacks or planning her next star-crossed love affair. 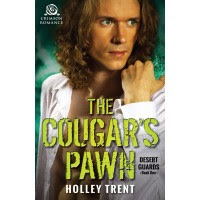 Ellery Colvard escapes her perfectly organized life for a camping trip with her friends, hoping for a tiny thrill. She’ll settle for a distraction, but instead she gets swept off her feet. Literally.

Alpha were-cougar Mason Foye needs a mate, even if he has to resort to drastic measures to get one. But when he and his brothers sweep up Ellery and her friends, the last thing he expects is a woman with a nasty bite of her own. Not only does Ellery know all about shifters, she’s got magic. In fact, the little witch is a bit scary. What’s more, Ellery isn’t convinced fated mates exist.

ABOUT Holley Trent
Holley Trent is a Carolina girl gone west. She writes contemporary and paranormal romances that have both humor and heat.

"He'd give up anything for love, including his father's favor." 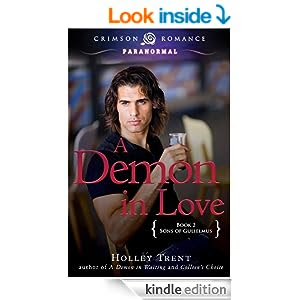 Charles Edison has spent most of his 123 years courting women for Hell. As a faithful son of the demon Gulielmus, he’s never known true affection for women. Which is funny, seeing as how he’s descended from a love god on his mother’s side. Now that he sees his brother falling head over heels, Charles wants the same for himself. He wants to belong to someone.

Charles learns the woman destined for him is one he shouldn’t want. Marion Wilder’s family has been on the supernatural Most Wanted List for twenty-five years because they were responsible for the demise of a demon. Gulielmus would kill her if he had the chance.

But Marion’s the only human woman Charles can touch without harming. She’s his one chance at having a normal life and a real family, and he would give up anything to keep her. Even his father’s favor.

EXCERPT
“Montana’s a pretty inhospitable place, huh? There’s still a month until winter, but I don’t think the snow cares about timeliness.”
“Mm-hmm.” She patted her pockets in search of her keys. The next thing he’d probably say was that he could make it a lot more hospitable for her, if she had enough cash.
Prostitutes were pretty predictable, and she certainly got propositioned enough, though usually the truck stop hos were a little less—upright.
But, shit, did she really look like the kind of woman who’d pay a man for sex? She wrapped her fingers around the handle, prepared to slam the door.
He moved closer and grabbed the door’s edge before she could pull it. “Hey, why don’t you let me buy you a cup of coffee? You look like you could use a cup.”
“I don’t think so, dude.”
She could afford her own coffee, obviously, but no prostitute had ever offered to buy her anything. Must have been a new sales strategy—the hook ’em, then hump ’em.
She just wanted to get back on the road, but he was right. She did need to refill her thermos, fiend that she was. Coffee was her one vice, and she’d forgotten to take the canister into the restaurant with her during dinner. She didn’t want to give the guy the satisfaction, though, no matter how good he looked.
She let her gaze fall on him once again. He looked harmless enough, with his easy stance and hands jammed into the pockets of his coat. His boots were actually quite good quality. Brown leather with some scuffs. Broken in, and wet from snow, but they looked damned expensive. Didn’t seem like hand-me-downs, either. The heels were too good.
There must have been good money in truck stop whoring.
“No, thank you,” she finally managed, and gripped the door handle again after two failed attempts. “I-I need to get back on the road and get this load delivered.”
“Must be lonely,” he said. His grin waned slowly, and this time it was he who looked away, toward a truck entering the lot. He waited until it had circled around to the gas pumps.
“It’s a job,” she said when he looked up again. Damn, those eyes. They were so sad, and for some reason, that made her a little sad, too. “It is what it is.”
“Do you have a long drive ahead? Maybe you’d like some company for a while before you strike out.”
She opened her mouth to make some snarky retort, but closed it without letting the words pass her lips. Loneliness wasn’t really one of her temperatures, but curiosity was. What was the harm in a cup of coffee?
No, no. She wouldn’t go there. She was too smart for that. “Pretty long, yeah. But I’m used to it.”
“Are you on a deadline?”
“Of course I am. I get paid more if I get it there early.” Fat lot of good that extra money would do her. It’d be more money she wouldn’t spend, and she was becoming increasingly aware that the economy didn’t work that way.
“I promise I won’t hold you up long.”
“Sorry, no. I need to get moving.” It was as difficult as swimming against a tide, but somehow, she managed to close the door and start her ignition."