Meet Marianne Rice
Marianne Rice writes contemporary romances set in small New England towns. Her heroes are big and strong, yet value family and humor, while her heroines her smart, sexy, sometimes a little bit sassy, and are often battling a strong internal conflict. Together, they deal with real life issues and always find everlasting love. When she's not writing, Marianne spends her time buying shoes, eating chocolate, chauffeuring her herd of children to their varying sporting events, and when there's time, relaxing with fancy drinks and a great read. She tries to make time for her husband too, but he often places behind her love affair with books.

Why did you decide to write romance novels?
Well, I read. A lot. As in 150-200 books a year. Somehow I manage to work full-time, tend to my three kids and their busy schedules, and keep my husband fed and clothed and...happy. Reading romance is my escape from work and mommy life. With so many stories and hot heroes running through my head each week, they sort of morphed into new characters with their own sets of problems and goals. One day when I was home with my newborn son, and two and four year-old daughters I thought, ""Hey, I should start writing some of my stories down."" And so I did.

How much of your personality and life experiences are in your writing?
Oh lordy. If my books were autobiographical they'd be a genre of their own: comedic horror meets dramatic nut house. My husband likes to think the hero and romantic elements are based off him, but eh, no. I like to write about situations that could have happened, or that have happened to someone, somewhere. My characters have flaws and internal conflicts--who doesn't?--and I like to give them something we all want: Happily Ever After.

What genre do you write?
I write contemporary romance because it's what I like to read. I do read some historical romance, but researching the specifics of different time periods and cultures would discourage me from writing. I'd love to write a dystopian YA (my children love reading them), but I can't imagine crafting a whole world from scratch. Kudos to those who can!

What is your writing routine once you start a book?
I am a teacher and am blessed with summers off. Although sometimes being home with three kids is more work. I remind my husband that I'm not on ""vacation"", but I'm a stay-at-home mom, which is a crazy, busy job! Anyway, I spend much of my ""working"" months cooking up my stories, and during vacations and the summer I'm able to spit it all out rather quickly. It may not be pretty, but I get the first draft of a book written in two months and spend the next few months reading it when I can. I don't get bogged down with crafting the perfect sentence the first go-around. I think I would get discouraged. In the summer, it's all about word count. It's what works best for me.

Do you feel humor is important in fiction and why?
Oh, yes. I love humor. Most people are funny in some way, shape or form. Maybe not all the time, but life is full of quirky situations and one-liners. I like to incorporate them into my writing.

Who are some of your other favorite authors to read?
I love Kristan Higgins, Jill Shalvis, Carly Phillips, Susan Elizabeth Phillips, Belle Andre. Oh, hundreds more, but those are the names that first come to mind.

Tell us about your latest book. What motivated the story?
My hero in False Start is a retired NFL player. I've always loved the game and even married a football player. Naturally I had to have a quarterback in my first book! 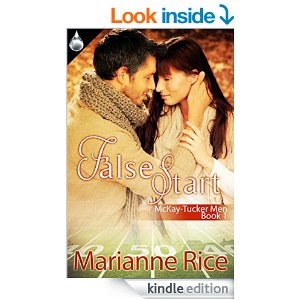 Book One in The McKay-Tucker Men series
Liquid Silver Publishing

Vowing to never follow her heart again, Meg Fulton keeps men at a safe distance. But retired NFL player Connor McKay manages to crack Meg’s defenses and she discovers the sports-loving alpha male is much more than a sexy package wrapped in great biceps and a tight rear end. He’s got to make the riskiest play of his life to get her to fall in love again …


“We need to talk.”
Startled by the deep growl, Meg Fulton looked up to the towering stack of testosterone filling her office doorway and cursed the butterflies that fluttered in her stomach.
She straightened her posture, ran her hand through her thick hair in an attempt to put all the strays back in place, and then reached for the lapels of the suit coat that wasn’t there. She felt vulnerable in her silk tank top and wished she had an extra layer to shield her from the menacing daggers targeted at her. Putting on the jacket would only make a spectacle of herself. The thin tank would have to do.
“Sure. Have a seat.” She crossed her legs and attempted to smile. Inwardly, Meg groaned. Connor McKay. She’d noticed him on the football field coaching his athletes and had not looked forward to the expected confrontation.
He remained in the doorway, making no move toward the empty seats across from her desk. His blond hair was short, barely longer than the scruff on his face, and as she looked up she saw his eyes—a fierce, fiery blue filled with accusation and something that ranged between confusion and lust.
Meg stood and retrieved her suit coat off the rack, slid her arms through the expensive fabric, feeling the need to protect herself after all. In three-inch heels, she stood at almost five-eleven, but he still had half a foot on her. “What can I do for you?”
“This plan? Not gonna happen.” He didn’t elaborate, just made his statement sound like fact.
Pompous, arrogant jerk. He was probably used to flaunting his muscles to get his way. The Texas A&M shirt stretched over his massive chest, making him appear menacing and…hot. Horrified she even noticed, she tipped her head back and raised her eyebrow. “Why do you believe it’s not going to happen?”
His wide stance continued to rigidly occupy the doorway. “Season’s already started. My players won’t be benched because of a policy that might start half way through their season.”
The stereotypical football coach was obviously not used to having a woman as a boss, but Meg wouldn’t let him intimidate her. The job as principal at Newhall High School would be a challenge, but one she was ready to face.