Yardley is reserved, Marchand has communication issues, and despite their initial mutual crush, it 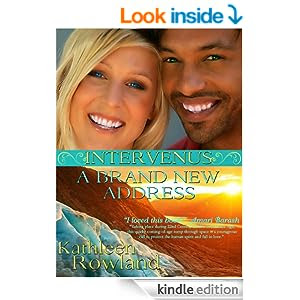 looks like they are never going to work things out.

Taking place during 22nd Century Earth’s second ice age, A BRAND NEW ADDRESS follows childhood friends, Yardley Van Dyke and Marchand LaFond, who trick and tease each other.  Robin-hooding thief Marchand sails his ice-boat across the frozen tundra to deliver fuel and food to the needy.  Subsistence gardener Yardley gives away home-cooked meals.  Just when their attraction sizzles, he enters a space race to Venus.

Yardley promised her dying mother she’d care for the family by growing food in their greenhouse.  Clashing with Dad’s fiancé puts her on the outs at home.  After winning a prize for an intergalactic garden project, she wants to prove her prototype works on Venus.

Groomed for the mission and calling the shots, Marchand can’t let emotions to get in the way.  Maneuvering through sun spikes and space junk is dangerous enough.  Evil competitor Vito Savage plans to annihilate competing shuttles. Will Savage’s darkest sins come to light? If Yardley goes, will she tolerate Marchand’s brazen exterior?  Will Venus be their brand new address where life will find them?

A REVIEW
"This is a good choice for teens or young adults suffering from Divergent or Hunger Games withdrawal. Ms. Rowland has created a very detailed futuristic world where the Earth is in the throes of a second Ice Age. Her heroine, Yardley Van Dyke is a capable young girl, much like Katniss. Yardley's talents lie in botany and gardening which makes her valuable in a desolate world where growing your own food means life." goodreads reviewer


From the living room Dad's voice charged its way to the front porch swing.  He and his fiancé were at it again.  Just terrific.  Hunkered under a fur-lined quilt, Yardley Van Dyke's head pounded, worsened by the frigid air.   As if trapped in a vise, pain squeezed hard from both temples.  On the swing she faced forward with her back against the house.  Against them.  Between them.  With their fight on its fourth day, they battled over her late mother's greenhouse.  Yardley tended it all day, every day.His fiancé, Pinky Hazelton, wanted to sell it and move into the Biosphere with its profits.  Powerless with her at the top of the pecking order, her mouth strained.  Around Pinky, she forced it into a straight line.  Why did Dad ignore her promise to her dying mother?  For three years, she'd grown food for the family.  Mom's hodge-podgy structure protected plants against the freeze of Earth's second ice age.  Yardley met the challenge of gardening in the frigid hinterlands, but without a surplus to sell, she had the low pro of a subsistence gardener.  She reined in ideas to maximize sunlight although her latest effort worked. Discarded Mylar balloons reflected light.  With fifty mounted, she pinched fewer dead leaves.  Under the quilt she balanced a basket of peas on her lap, proof of success from her dirt-candy world. Yardley took a pod, tore down the string, and dumped peas into the basket.  Inside the cabin Pinky screamed, ""Time is running out.""  Timeliness, a variation of her hammering technique, arose with every current event.   ""I'll think on it."" Dad's voice razzed like a trombone.""Better be quick."" As Pinky squawked about the essence of time, the trombone cranked louder and louder.  Their bombardment sent Yardley a wakeup call. Her hands shook, and she stopped shelling for one reason.  She predicted their routine.  Dad blew a gasket before giving in.  After that, Pinky won.  He yelled, ""Stop needling me, Pinky."" Hearing a smash, Yardley jerked upright.  A crashed dish against the wall?  She had no idea what would come next.  A flipping of a table? His fiancé screamed, ""Yeah?  Put this in your data bucket. An ice cap moves south.""  She imagined Dad's face turning beet red as he fumed just short of a gasket-blow.Rubbing one side of her head, she faced the frigid combination of family tension and the twenty-second century ice age. Their now quiet cabin in Newport Beach, California sat in an Arctic spruce forest with northern Siberian climate suffering an annual drop of five degrees.""Cold, colder, and about to be coldest."" Pinky filled the vacuum with truth, but was timing immediate?""You know, Pinky.  While I tested you out, you took over."" Dad's off-topic roar revealed bitterness, but he'd come around to her side.""Good thing I did. Want to sit on a polar ice cap?  It kills everything that's not dead.""Sick of listening to them, Yardley's gaze shifted to the porch steps.  With the inclement weather, they'd turn slick.  She'd slip and spill her peas if she stepped down them to walk the path to the greenhouse.  Not quite done shelling, a syrupy voice came through the rough-hewn triple-plank wall.""I don't want you dead, sweetheart.""  Pinky's wear-down entered its completion stage.An icy gust blew strands of hair across Yardley's face.  She groaned and let it be.  If she moved her hands, she'd spill the pods.   Her thoughts shot from the greenhouse issue to a parallel problem.  Without the greenhouse, she'd be a non-contributing eighteen-year-old still living at home.  Pulling the quilt over her head, she preferred the ice-age temperature to hanging out with them.    Using a chipmunk voice on herself cheered her up.  Yardley, there's no work for you.  Run along, won't you?Inside the cabin Pinky fueled her hissy fit with a nightmare.   ""Oh, Robert,"" she said, ""I had a bad dream.""  Pinky's premonitions often came in this form.  ""If we stay here, we'll die of full-body frostbite.""The chipmunk squeaked in her mind.  Bit of a cold snap.""No one wants that.""  Dad's tone warmed up.Yardley's throat tightened.  She swallowed a lump of raw emotion but refused to cry or give into defeat. She listened to Dad's steady voice as he brought up hidden expenses at the Biosphere. ""Selling the greenhouse might get us in, Hon. But can we afford it long term?""  Right on, Dad.  Don't give up.""Sweetheart, we need a contract.""  Within the cabin, the drama queen spoke matter-of-factly.  ""I know people at BotGen Incorporated.""  Yardley cringed, wishing she had the means to incorporate the pink-yappy hour. Since when had Pinky become a member of Botany General's inner circle?  A few minutes passed, and they stopped talking.  Was smooch-kissy-face going on?  Great.  Somewhere inside, her twin brother wandered about.  At times like this, Skeeter bugged the crap out of her. Nothing about Pinky bothered him including her obsession to watch century-old movies.  A few nights ago he'd shared his crush on a girl who lived at the Biosphere.  Yardley had nowhere to go.

ABOUT Kathleen Rowland
Kathleen Rowland writes under her real name.  She grew up in Iowa where she caught lightning bugs, ran barefoot, and raced her sailboat on Lake Okoboji.  Now she wears shoes and sails a Harbor20 with her husband, Gerry, but wishes there were more lightning bugs in California.
With an M.S. in Computer Science, she plans out her plots before writing.  Romantic Suspense is Kathleen's genre, from sweet to sensuous. What fun!