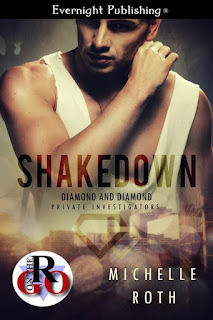 Private Detective Mike Diamond is the low man on the totem pole. More often than not he finds himself investigating insurance fraud or cheating spouses. When he's assigned a dog-napping case, he is on the brink of refusing until he meets the client. One look at her changes everything.

When the police refuse to investigate her case, Cassidy Werner turns to Diamond and Diamond Private Investigators. Despite the bad first impression he's given her, Cassidy still hires Mike to help her find her prize Tibetan Mastiff. As she gets to know him, she realizes that he's not only dedicated to getting Roddy back for her, but also a pretty great guy.

Right after she receives a ransom demand, things begin to heat up between them. Will Mike be able to crack the case and save her dog? And if he can, does that mean that he gets the girl too?


He was relieved to find the lobby was empty, so he stopped back at Lara's desk and asked, “Can you believe that shit? A dog napping?”
He didn't think for a minute she hadn't overheard every word. That woman was like the KGB and Secret Service all in one. Anything happened in this office, she had it under immediate surveillance.
Lara cuffed him on the arm and said, “She's in the bathroom, idiot.”
Mike winced, feeling bad he'd probably been overheard. But, seriously, who hired a PI to find a lost dog?
Seconds later, the bathroom door slowly opened. He almost did a double take as the woman stepped out. Aside from red eyes that had clearly been crying, she was a looker.
She was elegantly dressed and somewhere near his age, with a riot of auburn curls trailing down her back, like some sort of mermaid siren. All ripe, lush curves. He'd always liked his women soft.
And, he was ogling this obviously distraught woman like she was a steak. Not that he wouldn't be more than interested in taking a bite, but it was clear that now wasn't the time. So instead of voicing his thoughts, he stuck his hand out and said, “Mike Diamond. And you are?”
“Cassidy Werner,” she said, not bothering to stick her hand out.
Well, apparently she'd heard him. He'd need to apologize, if the look on her face was any indication. He dropped his hand and said, “My office is this way.”
She gave him a look that screamed 'You're on thin ice, buddy' but moved toward the open office door that Mike had gestured to. He followed her, once again appreciating the hourglass waist and full hips. Damn.
He moved behind his desk and gestured to one of the worn chairs. When she had settled in, he asked, “So I understand your dog has been kidnapped?”

ABOUT Michelle Roth
Michelle Roth is a novelist from the Great White North (Toronto, ON). When she’s not disappearing into foreign lands, or making two perfect strangers that she invented fall in love, she’s probably curled up somewhere with a glass of wine and a good book.