A DOWN and DIRTY #MFRWauthor Interview @ShaunaRoberts5

Shauna Roberts gets DOWN and DIRTY with MFRWorg.
Shauna Roberts (1956-) writes historical fiction, science fiction, fantasy, and romance. She was born in Dayton, Ohio, and grew up in nearby Beavercreek. After receiving degrees in anthropology from the University of Pennsylvania (Philadelphia) and Northwestern University (Evanston, IL), she was a science and medical writer and copyeditor until retiring in 2010. She is a 2009 graduate of the Clarion Science Fiction and Fantasy Writers Workshop and was the 2011 winner of the Speculative Literature Foundation's Older Writer Grant. She currently lives in southern California.

What are your thoughts on love scenes in romance novels?
Personally, I skim them to see whether they're relevant to the plot or to character development. If not, I skip them. Some authors do a wonderful job of using a love scene to reveal important new information; I wish all romance authors could learn to do so.

What does your husband think of your writing?
He is proud of me and will be even happier when I'm making enough money that he can retire!

What can we expect from you in the future?
I am about to start writing a romance set in Bordeaux, France, and its wine country. Also, I am researching another novel set in Mesopotamia. It will focus on one of the most influential and important women of the ancient world. Bringing her story to life and to the attention of readers will be very exciting.

Do you have a set schedule for writing?
My official schedule is to write from 9 to 3, with Sundays (and sometimes Saturdays) off. However, the real world routinely interrupts that schedule a couple of times a week with business that can only be conducted M-F, 9 to 5. So I often write in the evening to make up for missed time.

Do you have a favorite author?
My favorite author is Guy Gavriel Kay. He writes fantasies that are rooted in actual history and that have multiple main characters. I love how he weaves those characters and several complex plot threads together.

Tell us about your latest book.
CLAIMED BY THE ENEMY is historical fiction that crosses over into romance. It takes place in 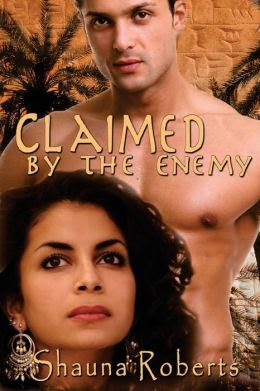 ancient Mesopotamia, the most fascinating time in history, when almost everything we take for granted today was new or being invented. The heroine is a princess, and the hero came from the same city and is now a soldier—of her enemy. Both are still dealing with the destruction of their home city and the loss of their families, a theme suggested by the near-destruction of New Orleans in 2005 by the failure of the federal levees.

BLURB
Crown Princess Nindalla knows the terrifying power of Sargon of Akkad’s army: Ten years ago, it destroyed her home city and killed her parents. Now the nightmare is happening again. The Akkadians conquer her new home, Susa; make her a widow; and strip her of her rank. Nindalla vows to protect her children from her enemies by any means necessary, including marrying whoever can shield them best. With plots swirling around her, can she trust her instincts to tell friends from foes? Farm boy Ur-sag-enki was forced to become a soldier in the Akkadian army ten years ago after it destroyed his home and left him with nothing. When the Akkadians conquer Susa, he is awarded its governorship. He looks forward to settling down to the normal family life he craves. First, though, he must keep control of Susa despite enemies who exploit his inexperience, and he must gain legitimacy by persuading beautiful former princess Nindalla to marry him. But can he win her heart when it was his hand that struck down her husband? These enemies—a princess and a lowborn soldier—can trust nobody . . . but each other.