M.S. Kaye shares 13 Reasons she likes Martial Arts.
M.S. Kaye has several published books under her black belt. A transplant from Ohio, she resides with her husband, Corey, in Jacksonville, Florida, where she tries not to melt in the sun. Find suspense and the unusual at www.BooksByMSK.com.

13 Reasons Martial Arts is Fun
1. You get to hit things.
2. YOU GET TO HIT THINGS.
3. You get to yell really loud and no one looks at you funny.
4. It keeps you in shape.
5. Hot Black Belt guys.
6. Make friends with awesome strong women.
7. Uniforms mean you don't have to worry about looking good in yoga pants.
8. Discipline.
9. People will think you're a badass. (if they didn't already know)
10. Live without fear.
11. It can be a family activity or something just for you.
12. Breaking boards is cool (and not as difficult as you think).
13. Did I mention you get to hit things? 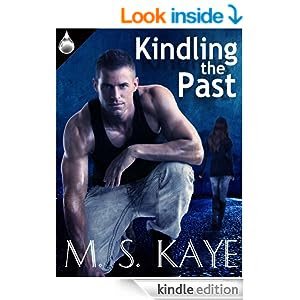 Kindle is fighting to survive on her own, to break free from her possessive and violent ex-boyfriend, not to let her best friend Anna know she’s in love with her husband. Most of all, she fights the visions she sees of the past—she doesn’t believe in that kind of stuff.

Then Anna is shot and killed.

In their grief, Kindle and Ty, Anna’s husband and Kindle’s Taekwondo instructor, grow closer. Although Kindle is careful never to let him too close, he helps her learn to accept her visions are real. Eventually, the truth about Anna’s death breaks through into Kindle’s visions, and she must find a way not to let it destroy her.

REVIEW
"This book is a good read. It has a good story plot and is well written. The characters are well developed and the dialog was very good. It keeps you interested. I will be interested to see what is next with M.S.KAYE. I will be looking for her books." -Amazon Reviewer


I fought the visions. My mother used to tell me my expression turned stupid when I had them, but I didn’t care about that so much anymore. I hated when the visions were true somehow, actual bits of the past. I didn’t believe in that kind of stuff.
“She’s such a snob,” one of the young women whispered on the other side of the locker room.
I stayed faced away, trying not to hear their gossip. I tugged my jeans on and pulled my shirt over my head. When I glanced in the mirror to fix my hair, I barely saw the dark brown framing my fair skin—only the way the other girls looked at me. I bent over to pick up my shoes.
“The guys don’t even ask her out because she’s so stuck up.”
I didn’t understand why they thought like this about me, but I didn’t much care anyway. As soon as I had my shoes on, I threw my gear bag over my shoulder and walked out.
Master Trahem was on the workout floor sparring with Mr. Schmidt. Master Trahem’s uniform was starting to come open, and sweat glistened on his well-built chest.
I looked away.
“Bye, Kindle,” Mrs. Trahem said as I passed the front counter. “See you tomorrow.”
I smiled at her, one of the few people I reserved my genuine smile for. She was a big part of the reason I came in early to help every day, her and her atrocious typing skills. She always held her fingers above the keys like a fisherman wielding a spear, as if expecting them to squirm out from under her aim.
But honestly, helping with data entry was just an excuse—Mrs. Trahem was the best person I’d ever known, and I felt calmer when I was around her.
“You’ll be there early, right?” Mrs. Trahem added. She tucked her silky dark hair behind her ear. There was a grace to her movement. No wonder Master Trahem had married her so quickly. At twenty-nine, she was a few years older than me but looked just as young.
“Definitely.” Then I kept walking. Before I gave into the urge to turn and watch Master Trahem.
The girls from the locker room followed me out into the parking lot. I sat in my car and started the engine.
While I drove the forty-five minutes home, I fought to stay awake. At least traffic at nine-thirty at night was thin. I always missed rush hour. I left my apartment before six every morning and didn’t return until after ten. Being tired felt normal.
As I pulled up to my building, I examined each car. I knew to whom each of them belonged, as well as half my neighbors’ friends’ cars. The girl across the hall traded boyfriends every week. She drove me nuts.
I had no way of knowing what Chris was driving. I had to know which cars were supposed to be here in order to know if there was a new one. Most of my neighbors drove beaters like me, and Chris had always liked something flashy. But with him, I couldn’t depend on consistency. He was smart.
I recognized all the cars tonight. I parked under the streetlight and kept the door locked while I pulled my gear bag onto my lap and slipped the strap over my shoulder. Keys ready, I jumped out of the car and jogged up the steps. I hated apartment buildings in Florida. The halls were open, no security doors to block unwanted visitors from knocking on your front door, from lurking in shadowy corners.
Within about ten seconds, I was up the stairs, down the hall, and at my door. Just being able to move quickly without running out of breath was worth the cost of Taekwondo classes. I felt more confident, less scared.
My door unlocked, I glanced down the hall one more time then slipped inside. I closed the door, locked it, and flipped the lights.
I was not alone.
He was right there, tall, thick, and blond as always. I was seeing as clearly as if through acid. I blinked to make sure he was really there. I always did that. It was stupid.
Chris was always there.