Q1. If money were not an object, where would you most like to live?
The beach. Absolutely the beach, somewhere hot.

Q3. What is your secret guilty pleasure?
I adore chocolate.

Q4. If you were stranded on a tropical island, who would it be with?
James Bond. Any of them. All of them. He/ they would catch our supper, build us a shelter, and eventually use some awesome gadget so we were rescued. Meanwhile I'd watch their muscles ripple with the sunlight glinting on their sweat... er,  that is, I'd help them, of course.

Q5. Ebook or paperback?
Both. Paperback for long airplane flights and lazy holidays. Ebook for ease of transportation and the ability to always have plenty of choice as to which one to read next.

Q6. Zebras or elephants?
Zebras. I like to move fast.

Q7. City life or country life?
I'm a city girl through and through, although I could adjust to being a beach bum real easy!

Q8. Tell us about your latest book. 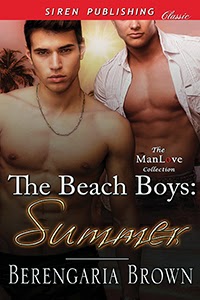 Craig Darnell and Seth Tyler are both on holidays at Two Waters beach. The moment they meet, the lust between them is instant and fiercely hot. Sex at the beach, in the woods, in the sauna…When they take a break from having sex they discover they have many interests in common and begin to build a relationship outside the bedroom.

Just when they are beginning to evolve from sex partners into a genuine relationship, their romance is interrupted when Seth is called back to the school where he teaches, for a staff meeting about an unexpected school consolidation. Seth is shattered when he and most of his colleagues find themselves suddenly unemployed. His well-ordered life has come to a crashing halt, along with his vacation—and perhaps his romance. Is this the end for both of them? Was it nothing but a vacation fling after all?


As they walked across the grassy slope, Craig said, “I looked around at tattoos and piercings, but I teach high school, as you know. I really wanted something that was my secret. Something that was truly mine. Oh, sure, lovers would know about it. Even other men in the school bathroom maybe. But I didn’t want something like an arm tattoo that everyone in the street would know about. I thought for a long time before I made my decision and I’m still very happy with it.”“Hell yes. I’m very happy with it as well.”This time Craig did give Seth a quick hug. Damn, he loved that man so much already. They were incredibly well suited to each other. It was amazing how perfectly their thoughts, hopes, plans, and ideas meshed, even after such a short time together. Craig was really looking forward to getting to know Seth better and better as time passed.“What about you? Have you ever thought of getting a tattoo or a piercing?”Seth put his ball on the tee, ready to take his shot. “Like you, I don’t really want something everyone can see. I like to wear short-sleeved shirts for work in summer. As you would know from my tan, I don’t wear much clothing in the hottest weather at all. So no matter where I got the tattoo, people would be able to see it. I’m not really into jewelry, so an ear piercing, or an eyebrow ring, or a nose stud, isn’t really me either.”Seth’s shot was good, bouncing and landing on the green near the next hole.Craig concentrated on doing his best, but he must have been distracted by thinking about Seth, because his ball landed right on the very edge of the green. “Damn.”“You’ll just have to admit I’m a better golfer than you,” Seth teased him.“That’s not hard.” As soon as he said it, Craig cock stretched and grew. Damn. He couldn’t even play golf without wanting Seth.

In the small town where he grew up, Jethro Wraight was persecuted, harassed, and traumatized because of his sexual orientation. Now living far away from where he grew up, Jethro’s only just starting to learn that it’s okay to be gay. Jethro goes to the gay bath house and meets Bart Moreton there. Bart still lives at home with his parents, even though his dad keeps telling him to get a real job, because he’s determined to become an artist. His work is good, and sells well at craft markets, but he doesn’t make enough money to survive on alone as yet.

Jethro’s never had a boyfriend before, but the two men instantly form a bond. Jethro is taking his very first steps in displaying affection openly. Bart’s focused on becoming an artist. The immediate friendship between them surprises them both.

Jethro was persecuted, harassed, and traumatized because of his sexual orientation. He meets Bart, an artist. Will he find happiness at last?

EXCERPT
A black-haired man walked over to the pool and stuck a toe in the water. Apparently satisfied with the temperature, he laid a towel on one of the chairs and left his sandals neatly beside it. He was wearing plain black board shorts, the first person in this section of the bathhouse that Bart had seen wearing anything other than his bare skin or a towel.
Well, perhaps he was shy or just new.
Bart watched as the man carefully climbed down the ladder into the swimming pool instead of diving in, and then swam a length in a neat style, scarcely making a splash. Everything about him seemed designed to prevent anyone paying attention to him, except for the fact that he wasn’t naked. It was an interesting conundrum. Was he just a neat, quiet person, or did he really wish not to be noticed? If so, why wasn’t he naked? He seemed to have a perfectly nice body. He was average height and build, not flabby or unfit looking. Unless maybe he had some scars hidden under those board shorts. Perhaps that was the reason he kept them on.
After the black-haired man climbed out of the pool and collected his towel and sandals, he walked across to the hot tubs and read the sign on the wall carefully. Once again he laid the towel and sandals neatly on a chair, reread the sign, pressed the button to activate one of the hot tubs, and climbed in.
Bart was fascinated by the man and decided it was time he experienced the hot tub as well. He dropped his towel on the chair next to the black-haired man’s towel and stepped down into the hot tub.
“Hi, I’m Bart. Do you mind if I join you?”
The man seemed a little nervous and hesitant but smiled and said softly, “I’m Jethro.”
Bart smiled back, wanting Jethro to relax. “That’s an old name. What do they call you? Jet?”
“Jet? I like that, but people usually just call me Jethro.”
“My full name’s Bartholomew, but my folks only ever used it to yell at me when I was in trouble. As soon as my mom called out, ‘Bar-thol-om-eeeew’ I knew it was time to start running.”
“Was Bartholomew a family name? I was named for an uncle.”
“Nope. Not that anyone ever said. Was your Uncle Jethro your godfather or something?”
The black haired man shook his head. “I hardly knew him. But he left me his store and his apartment when he died, so I really appreciate that.”
Bart grinned. “I would, too. What kind of a store is it? Are you managing it now?”
Jethro shook his head. “He’d had to close it when he got ill, and I haven’t decided what to do with it yet. I’m living in his old apartment though. I just recently finished cleaning it out and sorting all his furniture and possessions properly.”
Bart leaned back against the edge of the hot tub. “What do you think you might do with the store?”
Jethro looked thoughtful. “It’s in a small row of other stores. So far I’ve been talking to each of the owners about what they think would work best in the area. The consensus seems to be something that will make casual passersby stop and look in. All the stores are opposite a park and sports ground, and there’s quite a lot of foot traffic in the warmer weather. Not so much in winter, I’m told. There’s a café in the block, and people do go there all year around. It’s all very new to me, you understand. I need to think carefully about everything.”
“I do understand, but I also envy you. You have the most amazing opportunity to make it into whatever you chose. Well, within reason. I guess whatever you decide to sell can’t really compete with one of the other stores already there. But it sounds as though you’ve gone about choosing what to do very thoroughly.”