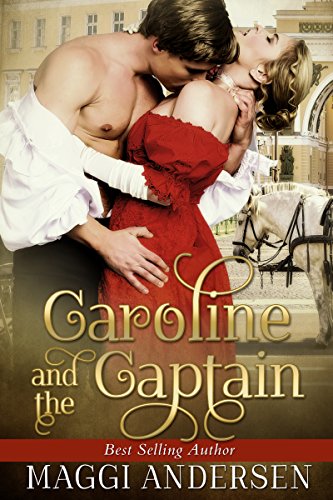 Caroline and the Captain
Historical Romance

Captain Nicholas Bonham of Wellington’s Peninsular Regiment, the 52nd Light Infantry, returns from fighting the Napoleonic wars to see his brother laid to rest. A skilled rider, George’s death remains a mystery, as does the parlous state of his finances. Debenham Park must be sold unless Nicholas can find a swift solution.

George’s former fiancée, Miss Caroline Mirringham, harbors a secret. She has trusted no man except her father and George, and now considers her future to be a desolate one. When her father proposes that Caroline marry Nicholas, she is filled with dread. The captain is nothing like his amiable brother. He looks altogether too strong and harsh. He would demand far more from her than she could give.

Freedom. That’s all Lady Honor Baxendale wants—for her sisters and for herself. Honor has a bold plan to become financially independent, using a skill she learned at her father’s knee. She seeks the help of a solicitor and is pleased with her choice…as long as she can resist the solicitor himself.

BUY LINK
EXCERPT
"With a glance at the overcast sky, Nicholas stood with her on the bank before an expanse of rippling grey water, observing the water birds swimming and diving into the murky depths. The breeze smelled of mud and rotting vegetation. Why were they here? If they were to tackle this apparently thorny subject, they could have done it in relative comfort in the drawing room.
He grew annoyed. Something must be done to stir this difficult lady into revealing more of herself. He cleared his throat.
Without warning, the skies opened. In a few minutes, they’d be drenched to the skin.
“Come this way,” Miss Mirrington called, a blurred figure in the misty rain, running ahead of him. Farther along the shore, a marble columned gazebo offered some shelter. She was quite fleet of foot, picking up her skirts and showing a good deal of slim calf, her bonnet dangling by its ribbon. Wishing himself elsewhere, Nicholas loped along beside her.
They ducked into the shelter of the arched roof, and stood gazing at each other. Nicholas took out his handkerchief and offered the cambric square to her.
She declined his offer with a shake of her head, pushing back a wet lock of hair and settling her bonnet on her head, the soggy daisies adorning it now drooping sadly.
Nicholas wiped the rain from his face, congratulating himself on his remarkable restraint in resisting the temptation to say he told her so. He should be angered by this ridiculous display of bad manners, but was distracted by the thin muslin of her gown clinging to her body, exposing the jutting shape of her full breasts. His gaze roamed to where the damp dress pressed against her slim thighs outlining an enticing curve at the base of her stomach. His body tightened and he looked away disconcerted. With all that had happened, he hadn’t even thought about sex for far too long.
“You’ll catch cold.” Unsettled by his inappropriate thoughts, he shrugged out of his coat and placed it around her shoulders, wondering if she’d reject this gesture also.
“Thank you.” She was so slender she almost wrapped his coat around herself twice. He regretted losing that beguiling view.
“I suppose you know why I’ve come,” he said, determined to get to the point before they both came down with pneumonia.
Her damp, dark-blonde hair framed a heart-shaped face, and a pair of intelligent grey eyes studied him. “Father did mention it.”
“Then we should talk about it, don’t you think?”
“I expect so,” she said without a shred of enthusiasm.
“First, there is something I need to ask you,” Nicholas said.

ABOUT THE AUTHOR
Maggi Andersen lives with her husband, a retired lawyer, in a quaint old town in the Southern Highlands of New South Wales, Australia. She has a BA in English and an MA in Creative Writing.
When not creating stories, Maggi reads, enjoys her garden, the theater and movies. She supports the local wildlife, the IFAW and the RSPCA. Her kookaburras (Australian Kingfishers) prefer to be hand fed.

An Amazon No. 1 bestselling Regency author, Maggi has published over 25 novels and novellas of different genres from historical romances, mysteries, romantic suspense and young adult novels. She has been nominated for the RONE Award 3 times and the BTS Red Carpet Book Review Awards. She's been a finalist in the Emerald Pro Award. Her first novel was a semi finalist in the Amazon/Penguin Breakthrough novel award.