Not Vanilla - Bondage
USA Today Bestselling Author Roz Lee and Bestselling Author Jennifer Lynne, invite you to taste the forbidden in a brand-new series offering a tantalizing glimpse into a range of ""flavors"" that are definitely not vanilla!

Taste the forbidden.
Amazon BUY LINK
EXCERPT
At sixteen, Colton Barnes had already made a name for himself on the football field, the baseball 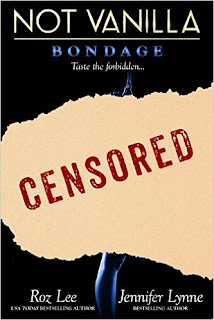 field, the debate team, the academic decathlon team, and the junior rodeo circuit. He walked the halls of Jeff Davis High School as if he owned them—and, hell, he did. Every guy wanted to be him, every girl wanted to do him, and every teacher wanted to clone him. Eventually, he chose rodeo over the colleges offering him both academic and athletic scholarships. He was/is too good to be true.

Sometimes I wonder if he regrets the path he chose. He made a fortune on the Professional Bull Rider’s circuit, but the sport took as much as it gave. Forced to retire after a particularly nasty animal stomped on his right leg, smashing the bones to bits, he returned to Ft. Worth with a noticeable limp, and started a business making custom bull ropes. He mostly keeps to himself these days, occasionally showing up at The Lone Star to have a drink with his buddies from high school. That’s where he found me.

I go there every week to drink and laugh with my girlfriends. The group ranges from a few to a dozen, depending on work schedules. We’re all single, except April who’s engaged and Bailey Rose who has a semi-permanent thing going with Travis. Conversation usually revolves around our dates, or lack thereof. Everyone there knows I dance, so it’s not unusual for one of the regulars at the club to drag me down to the dance floor to teach some greenhorn the basic steps. I was headed back to my table after teaching some sorority girl how to two-step when Colton stepped into my path.

At thirty, he is even more handsome than he’d been as a teenager. Age and experience have added character to his features, something I hadn’t been aware of until the moment I crashed into his broad chest.

He apologized profusely, but hell, if I’d had two nickels to rub together, I would have paid him to let me bounce off his chest. He offered to buy me a drink, and, finding the manners bred into me as a Southern woman, I let him. I lost track of how many drinks I consumed at his expense, but when I woke up the next morning with a herd of longhorns stampeding through my skull, I vaguely remembered agreeing to pose for him. I’d found the napkin with directions on it stuffed inside my bra.

CONNECT with Author Roz Lee
USA Today Bestselling author Roz Lee has penned over a dozen erotic romances. The first, The Lust Boat, was born of an idea acquired while on a Caribbean cruise with her family and soon blossomed into a five book series published by Red Sage. Following her love of baseball, she turned her attention to sexy athletes in tight pants, writing the critically acclaimed Mustangs Baseball series.
When Roz isn’t writing, she’s reading, or traipsing around the country on one adventure or another. No trip is too small, no tourist trap too cheesy, and no road unworthy of travel.