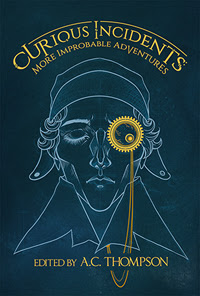 Curious Incidents: More Improbable Adventures of Sherlock Holmes--Second Anthology
by Liese Sherwood-Fabre
with Mocha Memoirs Press
Sherlock Holmes is one of the most recognizable characters in Western literature.  Conan Doyle’s inimitable detective has been the subject of literally thousands of books, movies, television shows, plays and even songs. In Curious Incidents: More Improbable Adventures, 15 authors of horror and mystery come together to create a unique anthology that sets Holmes and Watson on some of their most terrifying adventures. They face an amazing array of cases involving murder, mayhem, and mystery with a supernatural twist.

This time the great detective and his stalwart companion will venture into alternate universes, histories, and futures to solve puzzling cases of the paranormal beyond the bounds of imagination.

EXCERPT
"The Case of the Tainted Blood”
The epidemic arrived from the Continent in 1889, and a year later, our world shifted on its axis, plunging survivors into a nocturnal, feral existence. Had it not been for a peculiar turn of events one spring evening in 1891, that world might have consumed both Holmes and myself.

We were both involved in the change from the beginning, although we didn’t recognize it at first. As a medical doctor, I was called in to treat a number of extreme anemia cases, which all led to general organ failure and death. While I responded to medical emergencies, Holmes assisted in the investigation of a series of quite gruesome murders involving ripped throats, but a complete lack of blood in the victim or the surrounding scene.

And no one was immune from infection or attack.

I sent Mary to the country early on to avoid the illness’s rapid spread. Two weeks after seeing her off, I received a chatty letter from her, giving no hint of illness, and a telegram an hour later informing me of her death from rapid-onset anemia. At the time, I considered my inability to protect her my greatest failure.

Of course, events soon overwhelmed the medical and law enforcement communities, and many fell victim to the infection themselves. When Inspector Lestrade called on us a few weeks after Mary’s demise and provided a full explanation of the disease, we were forced to make a decision—survival or death. A year later, I wondered if we had made the appropriate choice.

The name dredged up images of an all-consuming and soul-less thirst, but the true transformation was to society itself. At the beginning of the epidemic, an ample supply of humans existed. Over time, however, the scales tipped and alternative sources developed as the human population faded from this earth. Animals were no longer kept for their meat—only for their blood.

My friend foresaw the inevitable near-extinction of all mammals and had cleverly captured his own stock of rats to maintain his and my existence. But survival is not always living.

ABOUT Liese Sherwood-Fabre
Best-selling author Steve Berry has praised Liese Sherwood-Fabre’s work as "gimmick-free, old-fashioned storytelling,” and her current story of Holmes and Watson’s adventure of solving the mystery of a murdered vampyre is no exception. She holds a PhD from Indiana University and currently works for the US government. An award-winning author, her pieces have appeared in national magazines and a collection of short stories and a novella are available through all major on-line retailers. An avid Sherlockian, she is a member of several scions and a monthly contributor to more than fifteen Sherlockian newsletters.

In the second grade, she knew she was destined to write when she got an A+ for her story about Dick, Jane, and Sally's ruined picnic. After obtaining her PhD from Indiana University, she joined the federal government and had the opportunity to work and live internationally for more than fifteen years. She draws upon these experiences to endow her characters with deep conflicts and emotions.