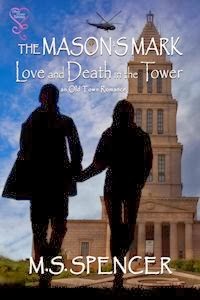 In both the best and worst first day at work ever, docent Claire Wilding meets the man of her dreams, but her carefully rehearsed guided tour of the George Washington National Masonic Memorial falls apart when she discovers a dead body. Together with Detective Ernest Angle, she's drawn into a dark world of black ops and Italian renegade masons. Also cloaked in mystery is her new love Gideon Bliss. A George Washington expert, he haunts the Memorial, his manner evasive. What is his secret? Claire fears she'll fall in love with him only to learn he's a thief or even a murderer.

Juggling two eccentric mothers, an inquisitive sister, and an increasingly smitten Ernest, Claire must find answers to a complex web of intrigue, including which black ops agent to trust, whether our first president strayed, and if she and Gideon will ever be together.
BUY NOW
No comments: 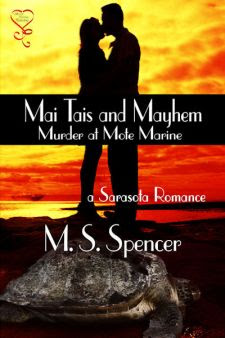 When Tessa Diamond rescues a baby pufferfish from a hungry seagull, her good deed leads her into a shady world of smuggling, Russian gangsters, and coded messages. She confronts murder, attempted ravishment, parrots, sea turtles and big fish, only to encounter blossoming romances at every turn, including one of her own.
She is torn between Cameron Mason, tiger-eyed and handsome, and Dugan Trevally, sexy and dangerous, but before she can drop her longstanding opposition to marriage and accept her true love, she must face the possibility that one of them could be a thief, and even a murderer.
No comments: 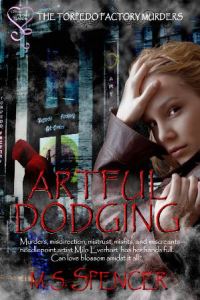 Waiting out the rain, Milo Everhart takes stock of her widowhood and the handsome man standing in the door to the bar.  Little does she know she will meet that man again and again under both passionate and terrifying circumstances.
Tristram Brody waits for his date, too conscious of the beautiful woman sitting by the door. Little does he know that she will hate him for trying to destroy her beloved art center, and even suspect him of murder. Nor that she will be drawn inevitably into his arms.
Little does either of them suspect they will be embroiled in not one, but two murders, in which the fate of the Torpedo Factory, an art center housed in an old munitions factory on the waterfront in Old Town Alexandria, will be decided.


This hop consists of 9 authors with 9 prizes.  Please comment on every blog where you want to be entered for a prize.


Below is the order of the hop. Enjoy!

An Interview with M.S. Spencer

Please Help me today in welcoming M.S. Spencer to the MFRW Authors’ Blog.

Tell us about your latest book, including its genre. Does it cross over to other genres? If so, what are they? (Please include the cover so we can post it as well.)

Three sisters, three lovers, and three spirits guarding a dangerous river. Add long-lost master artworks, stolen prototypes and a resident genius and you have a recipe for jealousy, sex, love and a little larceny. Triptych, due out November 9 from Secret Cravings Publishing, is a full-length novel of romantic suspense.

Miranda Cabot lost all interest in love after her husband Edward crashed into the Potomac River rocks called the Three Sisters. Her sister Honor likewise prefers her tower and her writing.  Not so the third sister Sybil, who longs for romance with a dashing Frenchman.  She advertises for said hero on Craig’s List and is rewarded with the Chevalier du Bon Arnaque, who comes to Washington from Strasbourg on unidentified business.

Miranda and Honor believe the Chevalier is a crook and ask their neighbors Dieter Heiliger and his grandson Corey, to act as chaperones. With three beautiful, strong-willed women in a house filled with three handsome, virile men, the inevitable result is an intricate web of jealousy, sex, and intrigue. Who will end up with whom, and will the Three Sisters take another life as the legend calls for?

I have a murder/suspense/romance in final draft, tentatively entitled The Torpedo Factory Murders. It’s the story of an artist who falls in love with the man who wants to destroy her beloved art center. Along the way they get mixed up in a complicated stew of murder and politics. At present I’m in Florida to research my next story, set at the famous Mote Marine Laboratory in Sarasota, Florida.  It will involve intrigue, murder and suspense. And love. And sex. And international trafficking of exotic birds. And dolphins and sea turtles. That’s as far as I’ve gotten.

What is your writing routine once you start a book?

By the time I sit down to write I’ve already spent hours thinking about the story, plotline and characters. Once I have a general picture in my head I’ll bang out an outline—listing the salient traits of the hero and heroine, what they do, etc. and a few sentences describing the plot. Then I make a loooong list of potential names for the principals.  I know now not to settle on a name till I’ve reached the third chapter of the draft.  The characters haven’t defined themselves well enough before that. I used to write bits and pieces of scenes & then try to fit them together but that was too complicated for my tiny brain, so now I simply keep writing from start to finish. Each day of writing begins with rereading the earlier couple of pages and fiddling with them. Then I find something else to do—check email, look for the cat, any activity I can think of that could be described as useful, if not productive. About 10 am I begin the serious writing.  Quit at eleven for my constitutional, back to work at 2 but a nap beckons. About four I wake up wand write madly for two hours, grumbling about all the time I wasted.  I wonder how many other writers find they are most creative when the dinner bell is about to ring?

What kind of research do you do?

All kinds.  It’s so important to be accurate in the details when you write. I’m reading a thriller by Steven Berry now, and it threw me when he described a garden as brimming with mums, asters, and pansies.  I mean, really. I use the internet to recheck facts and maps, as well as for basic research. For example, for Triptych I had to look up train schedules for the Paris to Strasbourg route to fit my time-line. I also spend a lot of time on the ground wherever the book is set. My third book, Losers Keepers, is set on the eastern shore island of Chincoteague and, even though I’d visited it at least twice a year for some fifteen years, I went back and followed the itinerary of my heroine to make sure she didn’t make a wrong turn into a dead end when she was supposed to be following the bad guy.

Who, if anyone, has influenced your writing?

My father loved to write, although most of his published works were academic.  I inherited my love of writing from him, but my mother gave me my love of reading. When I was young I read everything I could lay my hands on, which has stood me in good stead now that I’m writing. I absorbed a great deal of literary structure, sense of place, and the richness of human nature from my reading. The strongest influence came from the English romantic writers—Austen, the Brontes, and Thomas Hardy, but also from Iris Murdoch, Dostoyevsky, and the early works of Anne Rice.

How many books have you written, how many have been published?

I have written six full-length novels so far. The first one, a murder mystery set in Yorktown, Virginia, sat idly awaiting an act of God for years, until it was inadvertently thrown out by my husband, may he rest in peace.  It was good practice (I mean the writing) and I would have probably reworked it at a later date, but unfortunately I wrote it before the existence of flash drives and off-site storage and all I had was one hard copy.  My second novel, Lost in His Arms was published in 2009, my third, Lost and Found, in 2010, both by Red Rose Publishing. The great folks at Secret Cravings took on my third, Losers Keepers, which came out in July, and will release Triptych November 9. My sixth, tentatively titled The Torpedo Factory Murders, is still a WIP. The seventh remains a twinkle in my mind’s eye.

Are there any words of encouragement for unpublished writers?
Practice.  Like any skill, the more you practice the better you get. I’ve been writing all my life (granted, in fits & starts), but I’ve noticed a distinct improvement in my writing from my first published work to my latest. Write every day, even if it’s a grocery list or a haiku. A very good tool is a journal.  Try to write in it every night before bed to calm you and sort your thoughts out.

What is the most rewarding thing about being a writer?

No question: it’s rereading a passage and thinking, “Wow, that’s good! I wonder who wrote that?

If money were not an object, where would you most like to live?

Vienna. Absolutely. I have visited and lived in many places—in the Middle East, Europe
North America, and South America, but the week I spent in Vienna was the most magical. The food is wonderful, the architecture varied and eclectic, and the history romantic. But what I loved most of all was the music. It was everywhere—in the parks, spilling out of cafes, in churches and museums. I remember passing an orchestra playing Mozart in the street in honor of a store opening. How cool is that?

I love pizza with...

I love pizza with Phil. Oh, and with anchovies, jalapenos, and capicolla. The tomato sauce should not be sweet but abundant, the crust medium thick and the capicolla crisp.  Of course it’s very hard to find a restaurant that offers these ingredients. I found one and when I called to place the order, the order taker fell silent. Finally “Joe” said wonderingly, “I think you’re the first person to ever order this combination. And I’ve been in business for thirty years.”  I was so proud.


Where can your readers find you?

Twitter: www.twitter.com/msspencerauthor
Where’s your favorite place to hang out online?

My website is a freebie from Google and extremely difficult to edit, I try to keep it updated with links etc. and have even posted a lot of my poems there, but the blogspot is SO easy to deal with that I’m gravitating more to it.  At first I only posted news of blogs, interviews etc. but I noticed that the only posts that garnered comments were off-the-cuff remarks about events in my life or musings.
5 comments: