Meet MFRW Author Erika Kelly.
Award-winning author Erika Kelly has been spinning romantic tales all her life—she just didn’t know it. Raised on the classics, she didn’t discover romantic fiction until later in life. From that moment on, she’s been devouring the genre and has found her true voice as an author. Over three decades she’s written poems, screenplays, plays, short stories, and all kinds of women’s fiction novels. Married to the love of her life and raising four children, she’s lived in two countries and seven states, but give her pen and paper, a stack of good books, and a steaming mug of vanilla chai latte and she can make her home anywhere.

Why did you decide to write romance novels?
As far back as I can remember, I put myself to sleep at night telling romantic stories. I was one of those unusual kids who couldn't wait to go to bed--just so I could get back to where I'd left off. I didn't have a mom or grandma who read romance, so I didn't know it was actually a thing. It wasn't until my mid-30s when an editor wrote on my manuscript, Does this author know she writes romance? that I discovered those stories in my head made up an entire section of the book store!

What genre do you write?
I write contemporary romance. Which means in every book I write I get to relive that heart-pounding rush of meeting The One.  Honestly, there's nothing like that build up to the first kiss, the first time they make love after fighting their intense attraction for so long. I love writing about passion.

When did you first think about writing and what prompted you to submit your first manuscript?
After college, a friend and I would take long hikes on the weekends. We'd see weird things along the way and make up stories about them. One day she said, You should write a book. Something deep inside me clicked. It would take me years to connect the stories I told myself at night to the words I put down on the page, but that friend set me on the path. To be honest, I really only submitted that first book because I got sick of people referring to my writing as a hobby. It felt so dismissive for something that required such intense work.

What is your writing routine once you start a book?
I start imagining the next story at the tail end of the book I'm working on at the moment. Scenes start playing in my head, and I write them all down so I don't forget them. Only when I've finished the current book do I start on the next. I don't plot or outline, but I do work out my character arcs and plot points. I won't start a book until I have a clear map and some strong feelings for the chemistry between my characters. Then, I write a very messy, ugly draft--forcing myself to keep going forward. I write every day, and my most productive time is first thing in the morning. Well, after breakfast and a clean kitchen!

What about your family? Do they know not to bother you when you're writing?
I seriously can't work when people are in the house. No matter what, someone will call for me. To me, family is more important than anything, so when my husband asks if I want to get a coffee with him or my daughter wants to know what's for dinner, I'll stop what I'm doing. I know I can't get that time back with them, and I never want to look back and regret not being with them when I had the chance. So, I write when they're at work, at school, or otherwise engaged.

What do you do to relax and recharge your batteries?
I read. Sometimes the business side of writing overwhelms me. Or sometimes my brain can't function anymore--writing is hard! But I know I can pick up a book, get lost for a good amount of time, and then come back with renewed energy.

Tell us about your latest book:
I'm having a lot of fun with a New Adult series about the 3 O'Donnell siblings.

Nicole’s story, Mine for Now (formerly called Too Good to Be True) won the 2014 Golden Heart for Contemporary Romance. It’s about moving away from home for the first time and reinventing yourself. Between an alcoholic mom and a troubled boyfriend, Nicole wants a drama-free freshman year. So, out of all the guys on campus to fall for, of course she chooses the one whose mom took a housemate’s car on a joyride. Mine for The Week is about the oldest son, Golden Boy Ryan, a senior in college, and that scary time just before you push off into the unknown. Two months from signing with a major league team, Ryan heads to a resort for a much-needed break but finds the wildly sexy Sophie Valentine instead. Worst timing ever to meet the best thing that’s ever happened to him. Mine Forever is about the hard-partying middle son, Brandon, whose community service project is manning the camera of a student’s documentary. The topic? An expose on the hookup culture of this generation. The student? Just happens to be the woman whose virginity Brandon took while drunk at a frat party. 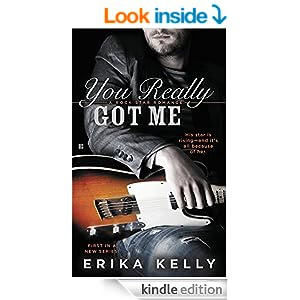 Emmie Valencia has what it takes to be the music industry’s hottest band manager. She just needs to prove it. Determined to discover a killer new band, Emmie is ready to make her move. First stop: Austin, Texas.

As a sizzling hot lead singer, Slater Vaughn has no trouble raising heart rates—but his band’s been flat-lining for years. When Emmie, his bandmate’s sister, crashes with them in exchange for some free management, her industry know-how lands them a spot in the biggest music festival in Texas. But it isn’t just her business acumen that catches Slater’s attention. Emmie is sexy and warm, and—for the first time in his life—he wants more.

But as irresistible as Slater is, Emmie is done with musicians. In her experience, a man can’t be a rock star and someone to trust with your heart—but Slater is determined to show her he’s both." Deliciously sexy romance between a band manager who's been burned one too many times by selfish musicians and a groupie-bait rock star who's so much more than he seems.

"Lovable characters and pulse-pounding chemistry make this one of my favorite reads of the year!"
--NYT and USA Today Bestselling Author Laura Kaye


Slater drew her up hard against him, held her to his damp chest. For a long moment he looked into her eyes. Her blood heated from the look she saw there. She couldn’t believe he was looking at her like that.
With her hands pressed to his chest, she could feel the moment the tension left his muscles.
He tipped his forehead to hers. “Enough, all right?”
What did that mean? The moment was so strange and confusing, she didn’t say anything. A tremor shuddered through her. Her heart pounded. She should probably walk way, let him go back to his flock of girls, but she really needed him to hold her. She wasn’t ready for him to let go.
They stood in the middle of the dance floor, holding each other, and she wanted to sink into him. It felt so good. Yes, it felt exciting to be in his arms, to not have him resisting or taunting or teasing, but it also felt so…peaceful. So right.
She didn’t want him to get all weirded out, so she started to pull away. But the moment she relaxed her hold on him, he tightened his. “Dance with me.”
Emmie looked up, overwhelmed by the emotion pouring off him. For her. He wanted to be with her. Without thinking, she let her head fall to his chest and just…surrendered.
He reached for her hands, brought them to his chest and held them there tightly. She could feel his heart pounding, feel the heat pouring off him.  His feet shuffled closer to her, his chin lowered to her shoulder, his nose nuzzling into her neck. She thought he’d possibly inhaled.
Sensation bloomed on her skin.They barely moved, just held each other, as though slow dancing at the prom. The frenetic beat of the music, the flashing strobe lights, the thrashing bodies all around them made no sense against the slow roar of blood in her veins, the thick swirl of desire churning deep inside of her.
She let out a sigh of relief, pulling her hands out of his grip and wrapping them around his neck. Slowly, she moved closer to him, their hips connecting, bound like magnets, moving together in a slow, gentle sway. His arms came around her, pulling tighter, until their dance turned more into an embrace. Was this happening? This sweet, intimate moment with him? He was allowing himself to get close to her? His gentleness stole the breath from her lungs.
When his hands flattened on her back, when his hips surged into her, when she felt the shock of his hardness against her stomach, she pulled away from him. What…what was that?
She fled into the crowd, not even knowing if he followed. Why had he done that? That deliberate gesture, announcing his interest in wanting to have sex with her? After sharing an intimate moment, he’d turned to sex. No, no, it hadn’t been intimacy at all. It had been the precursor to sex.
Because that was all he knew. God, she was so stupid. Thinking he wanted something different from her. That somehow she was special. She pushed her way off the dance floor.
God, she was only human. She couldn’t take much more of this…this teasing from him.
He shouldn’t treat her like all the other girls he could screw and discard, pressing his boner into her like it was hers for the taking.
She hurried into the bathroom, locked herself in a stall and just stood there, unable to catch her breath, calm down her jittery nerves.
Hers for the taking. He had been. He’d made that perfectly clear. She closed her eyes, the feel of his erection igniting a flash flood of desire.
She wanted him between her legs, pushing inside of her. She’d never wanted a man so desperately before. Had never felt it between her legs, the throbbing, the pulsing, the need.
She’d never felt things like this. And she loved it. She did. It didn’t make her feel slutty or depraved or anything. It made her feel sexy.
She loved the way it made her feel.
She loved the way Slater made her feel. But not for one night. God, no. That just wasn’t her at all.