Drey Winston is a fierce competitor who enjoys challenging her mind and body. But when it comes to her heart—no one ever gets close enough to compete for it. Having grown up believing she was an unwanted burden to her parents, she prefers to keep her feelings well hidden. Just when her hard-fought goals are finally within reach, the audacious Jesse Devlin comes along to breach her carefully guarded defenses.

After a disastrous marriage early in life, Jesse Devlin prefers strings-free relationships. Confident and outgoing, he gets along well with women, but his natural charm can’t seem to penetrate Drey Winston’s aloofness. While attempting to win her over, he’s the one who ends up losing his heart.

Can this commitment-phobic bachelor convince the stubbornly independent woman he loves that his feelings—and hers—are the real deal?

Buy Link!
REVIEW
"A great read! I was immediately drawn to the characters in Joyce Holmes latest romance, Visual Effects.. A terrific story that is a must for your summer reading stash. - Goodreads Reader


Jesse leaned against a tree to draw in a few deep breaths. As he straightened, he plucked his ball cap off his head and wiped his forearm across his brow, then hooted a victory cheer. “Hard work’s over. Time for the reward.”
He dropped the cap onto the sand and emptied his pockets into it. Then he pulled his T-shirt over muscled shoulders, dropped it onto the sand on top of his cap, and made quick work of his footwear. Drey stared in disbelief as he beelined down the beach and ran straight into the low surf. When he was hip-deep in the water, he slipped smoothly beneath the surface. He reappeared several feet out and turned to wave.
“Join me,” he called. “The water’s great.”
“Not a chance. The ocean is cold in summer, I can only imagine how frigid it must be today.”
“Wuss,” he scoffed and splashed water in her direction.
Shivers that had nothing to do with feeling chilly shot through Drey as she watched him emerge from the water a few minutes later. Rivulets ran down his chest, following the ridges and planes of his brawny body. Wet shorts clung to muscular thighs.
He ran his hands over his face and then shook himself like a playful pup. “You don’t know what you missed. Nothing like a dip in the salt chuck to get the heart pumping. Well, almost nothing.” He stalked deliberately up the beach toward her, and the look on his face made her back away, but she didn’t react fast enough. He caught her up in his arms, laughing at her shrieks of protest.
“Lemme go, Jesse. You’re cold. Come on, Jesse, lemme go. You’re getting me all wet.”
“That’s the whole idea. Get you wet and me warm.”
She gave him a firm push in the wrong direction as she sprinted down the beach. “Not if you can’t catch me,” she threw over her shoulder as she went.

ABOUT Joyce M. Holmes
Joyce Holmes lives with her husband and very small dog in the beautiful Okanagan region of British Columbia. The award-winning author is happily living her dream of being a stay-at-home writer. Photography and blogging about her travels are two of her passions, along with visiting her kids and grandkids. When she's not dreaming up stories in her head or planning her next great adventure, she’s off enjoying the great outdoors. 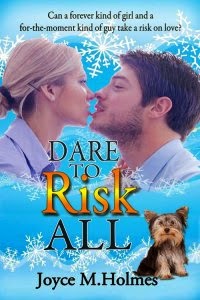 Dare to Risk All
Joyce Holmes
The Wild Rose Press

Tessa Caldwell’s carefully structured world is thrown into chaos when the handsome stranger she had an uncharacteristic fling with reappears in her life. Ben not only gets the promotion she thought was hers, but is also intent on resuming their physical relationship. Although Tessa’s rational mind insists on a professional association, both her heart and her traitorous body have other ideas. Can her sensible nature possibly win against such temptation?

Memories of the petite blonde with large, blue eyes have haunted Ben Dunham for months. When he transfers to her branch, he anticipates picking up where they left off. Reality doesn’t match memory when the cool and collected lady wants no part of him. If he intends to pursue Tessa, he has to earn her trust. The problem is, Ben carries a dark and dangerous secret. How does he get Tessa to trust him when he can’t trust himself?

Can a forever kind of girl and a for-the-moment kind of guy take a risk on love? BUY LINK

EXCERPT
Ben halted a few feet from Tessa’s chair and she rose to her feet, sliding nervous hands down the front of her skirt. For an instant, they stood frozen face-to-face, outside of time together, cut off from the others, the air between them tangible and electric.
He took a step toward her. Instinctively she stepped back and stared with disbelief into the face that had haunted her for months. Those same iridescent sea-green eyes with flecks of gold and swirls of gray, surrounded by long, thick, dreamy lashes. The slight jog to his nose, as if it had been broken, a trivial flaw that saved his features from absolute perfection.
Neither of them smiled as they continued to watch each other. She could see memories of their one night together reflected in those extraordinary eyes.
Memories of his hands roaming her body, of his mouth searing her mouth, of the two of them reaching peak after shattering peak together while thunder crashed and white-hot lightning forked its way across the storm-tossed night sky outside.
She tried to push the images from her mind and keep her manner professional, but then he offered her his hand and her heart fluttered. A treacherous excitement began rising in her system as reality sank in—this was Ben, standing right in front of her. And this time they didn’t have to say goodbye after three days.
She had an irresistible urge to reach out and touch his face. Her fingers itched to lose themselves in that crisp sandy hair, to wander across his chest, slide over the wide breadth of his shoulders and...
Stop thinking like that!
She forced herself to shake hands with him, uttering polite noises as though he were a complete stranger. Try as she might, she couldn’t get her lips to form the smile of welcome she knew would be the courteous thing to do.
“We’ve already met,” he said, still holding their handshake. His eyes were playful, with green turbulence just beneath. “Remember me?”
She realized with a start that she hadn’t replied. The intoxicating scent of his cologne robbed her of breath and his huskily seductive voice reverberated inside her, leaving her shaken and vulnerable. He was leaning in too close and she had to shake her hand lightly to free it from his grip.
“Of course, I do. We met on the cruise last fall,” she replied, hiding behind an ultra-professional tone.
“That is correct.” Morris’s loud voice startled Tessa. She’d forgotten anyone else was in the room. “The Vancouver branch awarded Benjamin the cruise as well, last year, so the two of you have already had the opportunity to become acquainted. That should facilitate your working relationship.”
Not bloody likely, Tessa thought with a sinking feeling of despair. How could she possibly maintain a businesslike relationship with Ben after the intimacy they’d shared?

ABOUT Joyce M. Holmes
Joyce Holmes lives with her husband and very small dog in the beautiful Okanagan region of British Columbia.  An empty-nest mom, she treasures family time, especially with her two precious little grandsons.  Hiking, biking, boating and photography are pursuits she enjoys when she's not dreaming up stories in her head or planning her next great adventure. 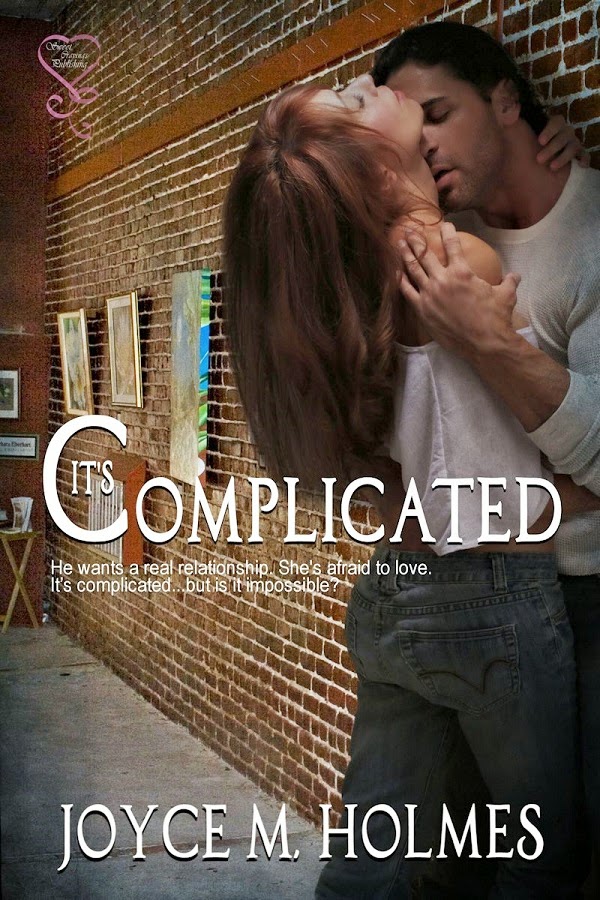 Having grown up with no one but herself to count on, Maggie Lapage carefully guards her feelings. Professionally, she goes above and beyond to give others the support she wishes she'd had as a child. When she develops a forbidden attraction to a client, she does what she thinks is necessary, to save his family and to protect her own heart.

Tom O’Shay finds his life caught in a nightmare when he risks losing custody of his daughter. It goes against his character to seek help, but he doesn’t have a choice. That doesn’t mean he has to like it. Everything changes when he falls hard for his daughter’s counselor and he suddenly has two fights on his hands. One for his daughter and another for the woman he loves.

He wants a real relationship, she's afraid to love. It’s complicated, but is it impossible?