On Wings of Darkness 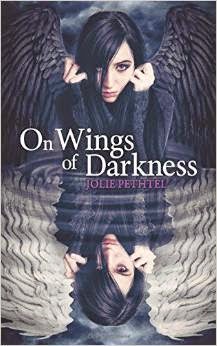 What would happen if you were meant to die, but someone intervened? Your very existence would disrupt the natural balance, effecting everyone you touch for the remainder of your unnatural life. What if you met your soul mate? A man who was meant for you alone, but at the same time not because you should no longer exist? This is what happens to Adara James when she crosses paths with Journey Montgomery, a man unknowingly shadowed by darkness. This is no chance meeting between two human strangers, but a collision of souls whose continued proximity to one another has the potential to tear apart the world.


When a fallen angel battles for control over her body, Adara James must fight to resist her dark side. BUY LINK


Adele curled herself into a fetal position, in an effort to fight off whatever agony was consuming her flesh. Unable to bear it any longer, she let out a blood curdling scream.
Journey ran to her side, gripping her shoulders forcefully.
“Adele! What is happening to you? Tell me!”
Wordlessly, she turned her back to him and he nearly scuttled backward in horror at the sight of her flesh tearing. Something was protruding from the two gashes in her back. It looked like black feathers wet with some sticky substance he couldn’t identify.
“My God! What is it?” He turned to the healer, who was backing away from the woman in fear.
“Evil.” The man muttered.
“Can’t you do something?”
The healer wordlessly shook his head no. Whatever this was, it was beyond his powers. It was beyond anything. They had been fools to think they could trick this possessing spirit. Now she was angry. He could feel the rage bursting from the helpless woman’s body. It was doubtful she would survive whatever came next.
A whimpering came from the other side of the fire. Adara bit her lip till it bled to hold back her own scream of agony. Much like her sister, she was curled into a tight ball, trying to evade whatever was coming. She rocked back and forth muttering under her breath.
Journey couldn’t quite hear what she was saying, until he reached her side.  She was repeating the same three words over and over.
“Make it stop. Make it stop. Make it stop.”
He turned her ever so gently, so he could see her back where something undulated beneath her skin. Whatever was inside her sought a way out and when it found none, it tore through her flesh. Two rips appeared, as with Adele and white feathers tinged in red poked through. Now he understood what the wet, sticky substance was—blood. Finally Adara could hold back her scream no longer. A long, piercing shriek rent the air, echoing around the camp.
Adara pushed away from him, rising to her knees, facing Adele across the fire. Adele rose to the same position. Their eyes locked briefly and then they seemed to slump weakly, their heads falling forward. They both appeared ready to topple over into the fire pit. Journey held himself ready to pull them out, should such a thing occur. God! He hated feeling this helpless.
He wanted to do something to stop their pain. Hell, he wanted to stop whatever horror was about to happen. It certainly couldn’t be anything good. Yet he sensed that whatever lay ahead was as inevitable as it was inescapable.
Blood ran like a river down Adara’s back, as a pair of wings pushed their way outward through her flesh, but she did not scream again, nor did Adele. It was exactly like the mirrored image painting. The internal struggle between light versus darkness. But this time the battle was out in the open and there appeared to be one hell of a smackdown about to take place here on his mother’s reservation. One woman had white wings and the other black. They rose to their feet simultaneously, facing off against each other. No longer sisters, but rivals, prepared for a fight to the death.

ABOUT Jolie Pethtel
Jolie Pethtel, an avid reader and writer, has always loved a good plot twist. In fact, when watching movies with her family she typically spoils the ending before the big reveal with her guesses, but nothing thrills her more than being wrong—except maybe hearing that a reader never saw the twists and turns coming in one of her own books. She has two published novels from her Jezebel Jinx Mystery series; Painted Jezebel and Poison Pens. On Wings of Darkness is her first paranormal romance.