Where Do Story Ideas Come From? ASK @JuliDRevezzo #MFRWauthor

MFRW Author Juli D. Revezzo talks about where her story ideas come from.
Juli D. Revezzo is a Florida girl with a love of speculative and romantic fiction and legend, and loves writing stories with all kinds of fantastical elements. She is the author of The Antique Magic series and the Paranormal Romance Celtic Stewards Chronicles series, New Adult romance Changeling's Crown, and short stories published in ETERNAL HAUNTED SUMMER, LUNA STATION QUARTERLY, among others. She is also a member of the Independent Author Network and the Magic Appreciation Tour.

Where do your story ideas come from? From everywhere. Maybe a story in the news, a random overheard comment from someone. Or it could come from something I'm studying at the time, say Celtic Mythology or the history of textiles, or other arts. Anywhere, really.

Are you a naturally creative person? Yes, I also sing, love to take pictures, the more artistic the better. I also noodle with Photoshop, and crafts, and am learning to knit.

Why did you decide to write romance novels? I don't think it was necessarily a conscious decision, really. I've always added a little bit of romance or a romantic theme, at the least, to my stories. The Celtic Stewards Chronicles just begged a full romantic storyline.

How much of your personality and life experiences are in your writing? A bit here and there. For instance, the heroine of DRUID WARRIOR'S HEART knits, and I'm learning to do so. The inspiration for the landscape around her home came not only from my love of Irish mythology but from a few of my own visits to the North Carolina mountains.

Tell us about your latest book. What motivated the story? Throughout the Celtic Stewards Chronicles series, in each generation of the heroine's family, one woman must decide whether or not to give her lands and love to the protector they send to her. Since the battle is generational, it prompted me to write about each of the special women and that meant going back in time to relate what each woman deals with surrounding the battle. DRUID WARRIOR'S HEART takes place in the 16th century and worked in well with my love of the Middle Ages and Renaissance.

Where did the idea come from? In the case of my latest book, DRUID WARRIOR'S HEART, being as it's the second book in the series, it and the overall idea for the entire Celtic Stewards Chronicles series came from a song by a heavy metal band Megadeth ""Foreclosure of a Dream"". That suggested a family who owned a piece of property deemed a sacred battleground for the Celtic gods, going from the beginning of time to present day. The series began in my book PASSION'S SACRED DANCE and continues backwards through the family's history to the late Middle Ages, in my new release DRUID WARRIOR'S HEART, and beyond. 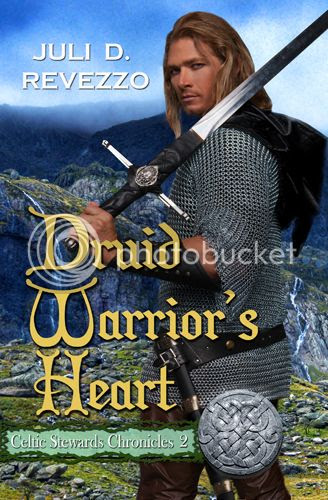 As the latest in her family’s long line of Stewards, Ruth Macken awaits the arrival of a warrior sworn to the Tuatha dé Danaan, the Celtic gods her family has served since the beginning of time. For on that day, a magical battle will erupt. A war between druids and an evil that will decide the fate of mankind.

Isaac Connel knows the battle is imminent, and is ready to fight, once again but from the moment he sees Ruth flitting around the sacred ground, he’s captivated by her fiery charms and a need to protect her.

Despite Isaac’s assurances and the dreams that guide her, what can Ruth and her lover do to drive off this evil? Despite everything, will the world end at the hands of an evil god?

"The author has a deep knowledge of Celtic antiquity and has imbued her story with authentic details about gods, practices and beliefs, which was one of the things I most enjoyed about this book along with the hero, a warrior of an ancient Irish race. Not only is Isaac one of the most attractive heroes I've encountered in a while but he harbors magic, a potent combination." ~Laura Hartland


A blast of cold air whooshed in as Ruth opened the door. “Can I help you?”
At first, the man said nothing, his green eyes scanning across her face as if he sought something.
The longer he stood there staring, the more awkward she felt. Was something wrong? Did she have yarn tangled in her sleeve? She checked. No, nothing hung from her wool sleeve.
The man still said nothing, so Ruth cleared her throat. “Sir?”
Her question popped him to life. “I’ve come for General Weddel’s boots,” he said in a deep, lush voice.
“Ah!” She opened the door a little wider. “Why did you not say so? Come in. My brother’s a little under the weather today, but I’m sure the General’s boots are here somewhere.”
“I am sorry to hear he’s unwell,” the stranger said. “Should I come back?”
“No.” She turned to the line of finished projects. Shoes of various sizes and boots of finer quality leather stood along pine shelves. “Let me—” She paused a moment, scanning the handwritten name tags Lonan had fastened to each one. “Weddel,” stood out on the top shelf. Over her head. Ruth frowned at the shelves. “Blast it! One moment.”
She swished through the heavy curtain concealing Lonan’s workshop and, locating the step stool her brother kept behind a worktable, carried it into the shop. She plopped the stool down in front of the shelf and soon had the boots in hand.
As she stepped down, someone laid a hand to her hip.
Her spine straightened in alarm. Who touched her?
A glance back and down gave her the answer: The man had rounded the counter and his strong hand steadied her. She blinked down at him but somehow didn’t wish him to remove his hand from its perch.
His forest green eyes set in a heart-shaped face; his mustache curved above full lips. The one obvious flaw was a nose that had surely been broken at one time. Despite that, she found him handsome, chivalrous—and armed as if he expected a fight any second, if the scabbards at his hip and boot pointed to any truth.
The sleeve of his brown coat slipped down a little and Ruth noticed a colorful design etched into his forearm. The faded blue tattoo resembled a bird about to take flight.
Her head spun, as if she’d gone into a trance.