BOOK SPOTLIGHT: Just One Friend by #MFRWauthor @juneshaw and Grandkids too! 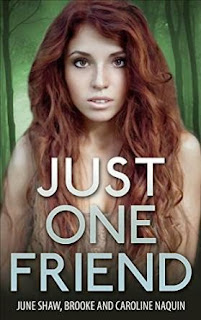 After warfare destroyed most of the country, only one area remains where people can survive. Because of limited food and space, the leaders decreed that each person is allowed to have only one friend.

A teenage girl believes things should be otherwise.

Sixteen-year-old Alabama Long keeps her head high, even with the heavy metal ball the Guards chained to her back. She feels the eyes of Tellers on her as she’s led down the dirt road to the old stadium, where a scanner checks the device implanted in her heel and wants the name of her friend. Her grandmother who’s raised her is the only person she can speak to freely while inside their dwelling, but why not one or more of those other teen girls she performs with? Or the Teller boy who watches her with a different kind of interest? Soon she’s thrust into realizing that the scruffy mutt who tries to jump hurdles with her will become the catalyst to send her and her friend and maybe one of the two boys who show interest in her to discover a better place—or their cruel deaths.


BUY LINK
EXCERPT
“You don’t trust him,” Gram says.
“How can we have confidence in someone whose job is spying on citizens and reporting infractions of its rules?”
“Alabama, he has to do some job he’s given.”
“I can’t believe you’re saying that and suggesting he can be believed.”
Her eyes soften. “He seems to like you.”
“Yes, he probably already reported me for escaping This Place.” I find a boulder near a small clearing. “Sit there, Gram. I’ll take this patch of grass.”
She settles on the rock and I lay Mutt across my legs. The burnt side of his leg looks raw. White inflammation rims the burn’s edges.
Sad-eyed, she nods. “Is he alive?”
I was ready to check for his breathing before she asked, but I’d wanted to steel myself.  This raggedy dog across my lap has become even closer than a friend.
“The rock’s moving!” Gram yells. The boulder she sits on has come to life.
“Jump away from it!” I scramble, pulling her off the thing.
Unwrapping itself, the boulder unfolds jagged edges. Its arms stretch out two feet, its legs shorter. It’s dark gray with a flat head and long fat snout. This boulder creature’s eyes are pinpoints without lashes. It snaps razor-like teeth and lunges at me.
“Alabama, run!” Gram calls, but I can’t leave her and Mutt.
“I’ll kill it.” I jump aside as the thing comes for me, and I skim the ground for a make-shift weapon. There’s nothing but a tiny rock and small bush.
Using a branch I break from the bush, I aim for its eye, but they are too small and I miss. The boulder creature’s snout widens and doubles in length while it whips its head toward Gram and releases a roar that shakes the ground.
“No, come for me.” I’ll leap on its back and with the power and twisting motion I use before tossing the shot put, try to snap its neck. I take a step closer.
It widens its mouth. Releasing a bellow my ears can barely stand, the thing scrambles at me.
I’ll have only a second to throw myself on its back.
Gram screams. I can’t stop to consider consequences.
The creature’s howls reverberate through the forest. It whips its head back and forth, and I’m surprised to find edges of its neck sharp. The skin on its back feels smooth and almost impossible to hold onto. The muscles beneath me are thick. Rock hard. This devil I’m riding bucks, trying to throw me off. It snarls and twists its head, aiming rows of deadly teeth at me.
The twisting and bucking throw me off balance, and the creature doesn’t have ears I can grab onto.
I push my hand and slip my fingers up on its head to poke out its eyes. My hand slides back, its head moving too fast for me to reach there.

Her teen granddaughters are avid readers who wanted to write a book with her. All three of them loved Hunger Games, so it was easy for them to decide on a genre.