MFRW Author Karen McCullough shares her Thirteen Favorite Authors.
Karen McCullough’s wide-ranging imagination makes her incapable of sticking to one genre for her storytelling. As a result, she’s the author of more than a dozen published novels and novellas, which span the mystery, fantasy, paranormal, and romantic suspense genres. A former computer programmer who made a career change into being an editor with an international trade publishing company for many years, she now runs her own web design business to support her writing habit. 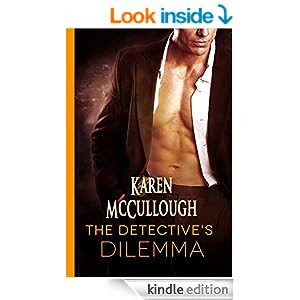 Although Sarah Anne Martin admits to pulling the trigger, she swears someone forced her to kill her lover. Homicide detective Jay Christianson is skeptical, but enough ambiguous evidence exists to make her story plausible. If he gives her enough freedom, she’ll either incriminate herself or draw out the real killers. But, having been burned before, Jay doesn’t trust his own protective instincts…and his growing attraction to Sarah only complicates matters.

With desire burning between them, their relationship could ultimately be doomed since Sarah will be arrested for murder if they can’t find the real killer.

Her fingerprints are on the gun, but Sarah swears she’s innocent.


The crash of something hitting the floor jerked her awake.
Sarah lay for a moment, listening, wondering what might have fallen, but not yet alarmed enough to drag herself out of bed and investigate.
An even louder thunk shook the house. She jolted upright in bed. Something had hit the floor again--something heavy. She reached for the bedside clock and pressed the button to illuminate the face. One-thirty. Vince might still be up. Maybe he’d bumped into something. She hoped it was nothing worse. She kept telling him to follow the doctor’s orders and lose weight. At fifty-three, he already had heart problems.
The thought of him lying on the floor after a heart attack or stroke goaded her up and out of bed.
She snagged her robe off the chair and rushed out of her bedroom. A light shone at the opposite end of the hall that ran nearly the entire length of the house. In the past year, Vince had been having more trouble sleeping and often stayed in his study, working or watching television into the early hours of the morning.
The door to the room stood open, but she didn’t see him at first when she rushed in. Papers lay scattered across the floor, drawers hung open from the desk, and one sat on its side on the floor as well.
“Vince?”
“Over here. I--” His voice wavered and broke.
She spotted him on the far side of the room from the door. He was on his feet and two men flanked him. Hoods concealed their features, and they both wore dark, nondescript clothes. Each held a gun, one pointed at Vince’s head, the other turned in her direction.
Sarah froze. Her breath stuck in her throat, and her stomach clenched into a tight knot. “What--? What’s going on? Vince?”
His normally florid complexion had a gray cast, and his shoulders slumped. “I’m sorry, my dear. These gentlemen have--”
“Shut up,” one of the two ordered.
She didn’t realize there was a third man in the room until he stood beside her. Sarah backed away, but he grabbed her arm and held her in place. He squeezed the arm so tightly it hurt when she tried to wrench it away.
“Shut up.” He lifted her arm from her side to chest height and pushed his gun into her right palm. Strong, square, latex-gloved hands flanked hers, holding her fingers around the gun’s butt, pointing it toward Vince.
When she didn’t put her index finger on the trigger, he tried to jam it into position.
“No.”
She wriggled and twisted, but he kept such tight hold on her, she couldn’t get free. Her stomach churned.
“What are you--?”
The hand on hers squeezed, pulling backward on the finger just touching the gun’s trigger, then tugged again and again. Three shots exploded in rapid succession, one blast right after the other. The recoil pushed her back against the assailant’s body, but he held her steady so that all three bullets found their target.
Vince jerked after each shot. Red splotches exploded on his stomach, his shoulder, and the side of his face. At a distance of no more than eight feet, even the assailant’s shaky aim hadn’t missed.