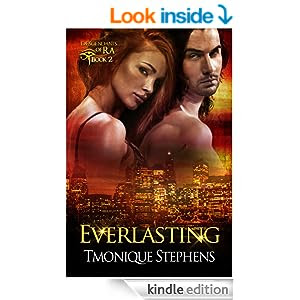 Save your brother.
Win your freedom.
No problem.
Falling in love with the cop trying to arrest you?
Problem.

To save his twin from death, Reign Nicolis will have to bargain with Goddess of the Dead, and once more become what he despises, El Mortem, The Scourge, a killer trained to show mercy to none. But he is haunted by those who have fallen beneath his blade. Their ghostly shapes dog his footsteps, relentless in their torture to make him suffer for what he was put on this earth to do two thousand years ago. Saving his twin ensures Reign’s enslavement to the Goddess. She may own his body, but never his heart.


Amazon  |  Barnes and Noble  |  Kobo
REVIEWS
Everlasting was just as good as Eternity….heck maybe better. Tmonique Stephens just really knows how to throw romance, egyptian mythology and tortured heroes together so very well. My heart bled for Reign, I mean if Roman stole my heart…Reigh has it by the veins. Being held captive for 2 millinium by an evil witch of a woman just turned the man into a souless unfeeling thing until he meet Alexis Lever. Alexis..now this heroine is very much different than Mrs. Stephens previous female protagognists. She’s tougher, but Alexis has her own demons to fight and now she’s falling in love with a killer.

This story was action packed and sexxy as sin. The sands of Egypt and NY are burning up! I loved it. It was just everything a paranormal romance should be. Reign and Alexis were the perfect couple for one another, their struggles with theirselves and then their feelings for each other was just so heartbreaking. Because you weren’t so sure if they were going to be together..so many things AND people are trying to keep this couple apart. But we do get a HEA..through literally blood, death and deception; our couple get their happy.

Now hopefully Roman can forgive his brother…but I’m sure Ms. Stephens has more in store for us with The Descendants of Ra series.

I love when authors can mix ancient mythology with current times and blend it all together perfectly. That is exactly what this author did, she didn’t pull any punches…you get it all. I highly recommend you pick up this series especially if you have a love for mythology with your romance. Its really good.


“The only peace I find is when I’m within one hundred feet of the one who balances my soul. You are that person.”
She was about to say she didn’t want to be that person when his gaze turned sultry, swept across her face, down the column of her throat and rested on her breasts. An internal switch flipped and she flushed. Her fingers stroked down the blade as images of him—of them—entwined and doing things she dreamed about flickered in her head. The positions, the thrusts, the licks, and touches. Orgasms after orgasms.
His gaze roasted her. Those oceany eyes kissed her lips, caressed her breasts, slid down her body and settled between her thighs where she ached. Her finger slipped on the metal and blood ran freely. The sharp sting seared all lustful thoughts away. Instantly, he kneeled in front of her and grabbed her wrist. She tried to jerk away, but he held her firmly, his thumb pressed hard on the wound.
“Apologies, your injury is my responsibility. I never should have let you—”
“It’s okay. It’s not that bad.”
“It is. My nearness keeps causing you injury. That, I cannot allow.” Strands of his long hair swept across his face, partially hiding his expression. Alexis brushed the wayward locks away. She skimmed her palm down his sculpted cheek and through his short beard. His eyes widened and…he stopped breathing. Amazed that she had actually caused a man to stop breathing at her mere touch, Alexis leaned in for a taste, that’s all she promised. One kiss to settle the heat stirring in her blood.
Centimeters away from his lips, she paused, then drew away.
There’s a reason you're celibate, Alexis. Too many relationships had soured quick and left her swearing off men for the past year. But if there was ever a reason to end her diet, Reign was it.
But he lied.
What if you approach this logically? You want him. Your panties are sticking to you, you want him so bad. So have him. Leave your heart out of it. Hell, men do it. You can do it too. Screw him, let him work all your kinks out. Just don’t fall in love with him so when the shit hits the fan—
I won't be the one cut by the blades.
She pressed her lips to his.
Holy hell! Nothing had ever tasted so delicious, felt as delightful as his firm lips slanted across her mouth. His whiskers gently brushed her skin, heightening her senses. His scent, woodsy with a hint of musk, filled her lungs. She leaned into him, parted her lips, and licked the seam of his closed mouth. He shuddered and his lips parted. His tongue darted inside her mouth and ignited her blood.
He wanted her. She didn’t just feel in it in his touch, but knew it as if she were peeking into his soul.
They yanked apart, she panting while Reign inhaled sharply and exhaled deliberately. His pecs heaved as his gaze devoured her. Nothing made sense, not the heat surfing through her body or the hunger gnawing at her soul. Kissing Reign erased the presence of every man who had ever touched her. Flustered, she glanced down and saw her finger still pressed between his.
He released her. She wiped away the smear of blood and found perfect new skin. “Okay, so how did you do that?”
“I do not know.” His gaze shifted away.
He’s lying. Disappointment dissolved the lingering taste of him. Wow, that didn’t take long.

ABOUT The AUTHOR
Born in St. Thomas USVI, Tmonique Stephens grew up in The Bronx, New York one mile from Yankee Stadium. Currently, she lives in northeast Florida. Her can’t miss shows are The Blacklist, Person of Interest, Vikings, Game of Thrones, and The Walking Dead. She loves Asian cuisine, but her heart and stomach longs for anything from the Caribbean.

She has a contemporary revenge series cooking on her front burner and an angel series simmering on her back burner.