Scottish paranormal romance#MFRWauthor Mary Morgan,  resides in Northern California, with her own knight in shining armor. However, during her travels to Scotland, England, and Ireland, she left a part of her soul in one of these countries and vows to return.
Mary's passion for books started at an early age along with an overactive imagination. She spent far too much time daydreaming and was told quite often to remove her head from the clouds. It wasn't until the closure of Borders Books where Mary worked that she found her true calling--writing romance. Now, the worlds she created in her mind are coming to life within her stories.
Paranormal, Erotica
Crusader, Adam MacFhearguis is on one last quest to the standing stones in Scotland where he seeks to bury the past. However, a silent prayer sends him to an unknown future and to his beloved Meggie. When he uncovers a shocking revelation, Adam questions everything about the woman he thought he knew and loved. He may have traveled the veil of ages, but time is now his enemy.

Margaret MacKay lives a life in the future without the memories of her past—her death. When Adam arrives at her door confessing he knows her, she is confused and wary. With each passing day, she yearns to learn more from this stranger. Yet, when a truth is revealed, can she trust the man to unlock the chains from her mind and heart?

Will love free the bonds to unite the two lovers who were doomed centuries ago? Or will evil finally claim victory over the Dragon Knights?

1. Braveheart – Will never forget his speech, or the epic music played throughout.

3. Knight’s Tale—I enjoyed the humor and again, the music. (Do you see a pattern in my favorites?)

7. The Master of Ballantrae —Errol Flynn in Scotland…oh my!

8. The Sound of Music —My first indoor movie. It’s a must see around any holiday.

9. The Ugly Dachshund —Since I owned a dachshund, this 1966 comedy was a family favorite.

10. Ever After —A twist on the Cinderella story.

12. Titanic —Beautiful, tragic, and I loved the music. 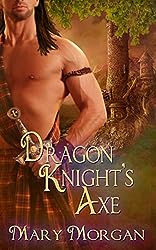 Battled scarred, Dragon Knight, Alastair MacKay, has fled to the seas to separate himself from his powers that are connected to the land. Yet, when he rescues a woman from a slave trader in Ireland, he steps back inadvertently into a world filled with magic—taking on the role of protector and leading him on a journey to confront his greatest fears.

Research assistant, Fiona O’Quinlan loves translating ancient artifacts at Trinity College. When she falls asleep on an archeological dig, she awakens in another time. She soon discovers a Dragon Knight’s relic has been entrusted into her care. Determined to return the artifact to the Great Glen, Fiona is unprepared for the danger ahead—losing her heart and soul to Alastair “Beast” MacKay.

Will their love be strong enough to soothe the beast and heal the man? Or will Death swing its axe, leaving them lost for all eternity?

BUY LINK
What One Reviewer Says...
Booktalk with Eileen
My Thoughts: I was revved up for this one, because I’ve already fallen in love with the series and the author’s writing.

And true to form I was pulled into a fantastic story within the first paragraph in 1206. I was fighting a vicious sea, spewing water from my mouth, slashing rain and wind so strong I was brought to my knees. Was I headed overboard? Whoa! What an opening.

This series has time travel. Why do I love it so? It’s because traveling to the past is NOT something each heroine in the series wants. Each have their own story on how they arrived to the highlands. In my fantasy of fantasies, I’d really love to be one of these women who get pulled back. But since it is HIGHLY unlikely, I must satisfy myself traveling through the imagination and inspiration of a clever author. Mary Morgan has captured my fantasies with fae, a dragon living in Loch Ness who can speak through mind touch, brawny, brave, honorable men and a wild land of magic.


He would get the truth out of her. She was now his. Bought and paid for.
His anger simmered just below the surface, and he allowed his eyes to flash with the fire of the dragon. Hearing her gasp, he smiled. Good, little bird. Fear me. Without giving her time to react, he swept her up and dumped her over his left shoulder, and strode to the ship.
He heard her sharp intake of breath, and then she started to pound against his back. “Put...me down,” she demanded.
“Nae.”
She started to kick, and he clenched his jaw in frustration. The little bird had talons. He responded with a smack to her bottom, but instead of removing his hand, he kept it against her soft curves. “I will put ye down when we are on my ship.”
She went completely still, and then she screamed.
Alastair dumped her onto the ground. “For the love of Brigid, did ye have to yell into my ear?”
Fiona rubbed at her bottom and then stood. “You beast,” she spat out at him. Jumping onto a nearby boulder, she looked directly into his eyes. “Don’t you ever touch me like that again.”
Alastair yanked her to his chest by her arms, his face mere inches from hers. “And what are ye going to do?” He watched as her eyes widened in alarm. Blue eyes that reminded him of the sky on warm summer days. Then his gaze traveled down to her lips, red as berries.
Instantly, his beast roared to life. Claim one kiss, Alastair.
“I will slit your throat,” she whispered.
Releasing his hold, his beast laughed, mocking him. He stared at her for a few moments before turning away. Stalking over to the ship, he climbed up the ladder.

ABOUT Mary Morgan
I am a constant daydreamer and have been told quite often to remove my head from the clouds. Yet, this is where I find the magic to write my stories. Not only do I love to weave a good tale, but I have a voracious appetite for reading. I worked for Borders Books for almost fourteen years. Imagine my delight to be surrounded by so many books, talking to others about them, and getting paid.

I have traveled to England, Scotland, Ireland, and France. There are those who know me well when I say, “My heart is in the Highlands.” I believe I have left it there or maybe in Ireland.

When not writing, I enjoy playing in my garden—another place where magic grows. Of course, there is time spent with my family. They are the ones that keep me grounded