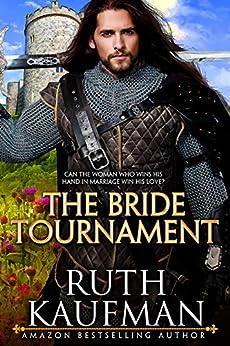 The ""Gone with the Wind"" love triangle meets ""The Bachelor"" in late medieval England.
The king wants Lady Eleanor de la Tour to marry the new earl, but she wants to marry her betrothed.
Richard Courtenay needs to uncover her father’s alchemy secrets and vows to win her even as she arranges a bride tournament to find him a better, and willing, bride. Can they attain what they most desire?

REVIEWS
[A]n intriguing and enjoyable story. Kaufman writes well-developed and sympathetic characters with clear motivations. The Bride Tournament is a page-turner of a historical romance that will have readers rooting for a happy ending.  --RT Book Reviews

Do you like historical romances that are full of twists and turns? This is the book for you if you do. ... Had to read this through from beginning to end in one setting. --5 Star Amazon Review


EXCERPT“You’re scaring me.” Eleanor couldn’t keep her voice from trembling.
“You’ll think me the bearer of bad tidings, daughter,” he said. “But ‘tis for the best. You cannot marry Arthur. Not now. Not ever.”
The room tilted. Her empty stomach threatened to rebel. “Why? We’ve pledged our troth, which is akin to marriage.”
Lack of sympathy in her father’s light brown eyes brought tears to her own. “Arthur staunchly supported the old king, Henry. He has been attainted by the new king, Edward. That means—”
“It means he has lost his title.” Eleanor dropped onto a bench, glad for the stone wall to support her back. “His lands are forfeit. There’ll be nothing for any children to inherit.” She jumped to her feet in horror. “He could be executed.”
“His life will be spared. But King Edward has given Arthur’s titles and estates to another,” her father said. “There’s a new earl of Glasmere.”
“This changes nothing.” Eleanor swallowed against the bitter taste in her mouth. Hope filled her. “Edward himself was attainted several years ago. If God’s anointed can rise so high from such a fall, surely Arthur can be made an earl again. We shall get the bill reversed.”
Her father pressed his lips together, as if biting back more bad news. “What will be is for the best.”
“I must go to him.”
He caught her arm. “Eleanor, stay. You’ll not marry Arthur today.”
“If not today, then soon.” No matter what her father said. Eleanor closed her eyes and imagined all was as she’d planned. She would make it so.
She lifted her chin, determined to behave as the lady she was raised to be. No one would see how the news of Arthur’s attainder or delay of their wedding affected her. “We must tell the guests the wedding has been postponed and send them away.”
“No. They shall remain,” her father replied. “Because you will marry today. You are bound by contract to wed the Earl of Glasmere. So you shall.”
She sucked in a breath. “I am betrothed to Arthur.”
“You were. King Edward asked the archbishop to annul your betrothal and procured a dispensation for the banns. You must wed the new earl instead.”


ABOUT THE AUTHOR
Ruth Kaufman is a Chicago Amazon bestselling author, on-camera and voiceover talent, freelance editor and speaker with a J.D. who enjoys chocolate peanut butter milkshakes and singing in a symphony chorus.

THE BRIDE TOURNAMENT, the third standalone book in her Wars of the Roses Brides series, joins AT HIS COMMAND and FOLLOW YOUR HEART. Writing accolades include Romance Writers of America® Golden Heart® winner and runner up in RT Book Reviews’ national American Title II contest.

At His Command - Historical Romance Version 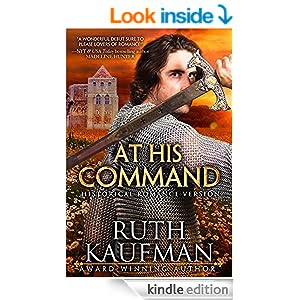 Could she defy her king for love?

Nicholas has no interest in marriage, but can’t deny he’s attracted to Amice. He’s surprised to finally find in Castle Rising a place he feels at home. A kiss sparks desire neither can ignore, yet serving opposing factions seeking to govern England threatens to pull them apart.

At court, the king and queen reject Amice’s pleas and choose a new husband for her, a highly-ranked lord who’ll provide connections and coin for the king’s depleted coffers that Nicholas cannot. How can she follow the king’s command when she’s a scribe for his rival? How can she marry another man when she’s falling in love with Nicholas?

Sir Nicholas Grey’s scout leaned forward in his saddle, holding up two fingers to let the others know two horses approached. Nicholas heard only the slight jangling of harnesses blended with wind rattling through the trees, but relied on his scout’s uncanny ability to hear what no one else could.
He and his eight men sat alert, deep enough in the forest to avoid being seen while maintaining a clear view of the road through leafless branches. Nine armed men could frighten travelers. ‘Twas best to let them pass.
Each man watched, each horse sinking deeper into chilling mire as a mud-covered, black palfrey plodded over the rise in the road, its long mane whipping in the frigid winds.
“No rider,” Martin, the scout, murmured.
“Look again,” Nicholas replied. At first he too had thought the horse was riderless. Now he could see a woman collapsed on the animal’s back. Her dark hair draped down its flank, mingling with the horse’s mane. The palfrey placed each step as if trying not to jostle its burden.
Another horse, this one a brown rouncey ridden by a thin, balding man, galloped after the palfrey. A look of triumph brightened the man’s face as he spotted the horse ahead of him. He bent forward, extending his hand. Fingers like talons grasped the woman’s tangled hair.
“Mine!” he cried.

Amice Winfield jerked awake. Agony forced her head back, allowing her to see the man who gripped her hair as though he’d perish if he let go.
Harry Winfield.
She screamed. Arrows of fear pierced her as she clawed at his fingers. Her horse bolted, leaving her dangling from Harry’s hand by a small clump of hair. The long strands held for a few seconds, then tore from her head.
Pain seared her scalp. She dropped into a puddle. Stunned by her fall and her stinging head, Amice could only stare at her tormentor while freezing water soaked her clothes. How she hated him. How she regretted her desperate flight from home. But what other choice did she have?
Harry gaped at the dark tresses hanging from his hand. He threw them to the ground as she struggled to rise. Panic gripped her as his hostile glare changed to a slow, confident smile.
“There’s nowhere to run. I’ll catch you if it’s the last thing I do,” he vowed. He leapt off his horse.
Amice tugged her sodden skirts, trying to haul them out of the puddle. Where was her mount? Too far away to reach without being caught, weighted down as she was. Sprays of water flew as she heaved her skirts over her arm. Heart racing, she ran for the trees. A branch snagged her. With a cry of frustration, she pulled the wet wool until it wrenched free.
Ignoring twigs tearing at her skin and icy mud that sucked away one of her shoes, she forged ahead. She gasped for air as she plunged into a tiny clearing, then came to an abrupt halt at the sight of a group of mounted men.

ABOUT Ruth Kaufman
Ruth Kaufman is a Chicago on-camera and voiceover talent and freelance writer, editor and speaker with a J.D. and a Master’s in Radio/TV.