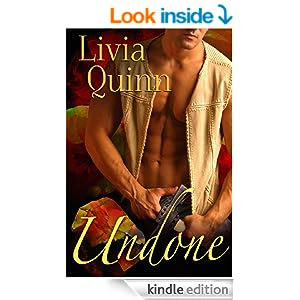 Undone - The setting: New Orleans and Pernambuco, Brazil. One year ago, Antiquities dealer Elektra Charpentier lost the rarest opal she'd ever almost owned, and the only man she'd ever loved.
Now he's back.
Aussie gem hunter Cass McKay spent the last year searching for Elektra's Blood Opal and a way back into her life and her heart.
Now he has it. And he doesn't intend to lose her again, because without her, he's -- U n d o n e " Like a Rumba or Salsa...the beat of this story will get cha!

EXCERPT
""Hot, hot, hot! Did I mention, it's hot? Loved the scenes in Brazil...Strong characters. Tight, fast plot. Oh, and it's hot.""

""I loved this book!! Exciting, sexy and sit on the edge of your seat kind of book!!!""" "A low animal growl sounded from deep in his chest as he halted, still deep within her, his chest heaving in agonizing uneven breaths. In a single fluid motion, he levered himself off of her to sit on the edge of the bed.

Oh my God, what was happening to them? Agony clamped down on her heart. How could she make this right? Shoulders slumped; he held his shaking hands in front of his face as if he didn’t recognize them as his own. “I’m sorry,” He whispered raggedly.

Cass held up an unsteady hand. He only had a few words left and he wanted to get them said. He wiped his hand over his face, disgusted. Looking down he saw the rose petals crushed and broken beneath his feet. Like his heart.
He’d done it again; he’d given up his self-respect to this woman who only wanted him for sex and a piece of glorified rock. And this time he’d forced himself on her in an act not entirely of love.

He placed his fingers on her chin and waited until she returned his gaze. “When are you going to figure out that you became the successful, intelligent, creative woman you are, despite that sonofabitch of a father? You might flash the Blood in your father’s face, but you’ll only be disappointed if you think it will make him respect you.”

He pulled his pants on, his shoulders hunched, shook his head. When he turned to her, she ached at the pain and defeat in his eyes.

“You’re terrified of relying on someone, on me— trusting me.”

She couldn’t speak because what he said was true. At least it had been— once.

He stroked her cheek, a slight tremor in his fingers then his hand dropped to his side, “You’re breaking my heart, sheila.”

He walked to the door, said quietly, “Whatever it takes, I’ll get your opal. Then maybe I can move on.”

“I won’t touch you again.” As if all his energy had been drained, he rested his forehead against the hard wood. “I have to try to move on.”

Then he was gone."

ABOUT Livia Quinn
Livia Quinn, a D.C. native living in Louisiana, began pursuing her dream of publication after a little known event called Katrina. With several interruptions in her career involving weather, it’s only natural that storms would be at the center of her stories. She is a business owner and professional singer; has been a salesperson, plant manager, computer trainer, and mail lady.

She's written eight books based in the communities around Storm Lake— an infamous, though fictional lake in Southern Louisiana, where stories range from paranormal on the west end to contemporary on the east.