One woman tore him apart. Another is brave enough to put him back together—if his past doesn’t kill him first.

MFRW Author Melissa Fox self-published Ash Rising (A DEAd novel), a Mainstream Suspense on May 20, 2014. It's available in both print and ebook! 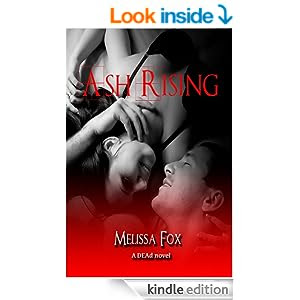 Infiltrating an international drug cartel is the dangerous chance of a lifetime for Asher Beaulieu of the Royal Canadian Mounted Police. Falling in love while running the op isn’t part of the plan, but he never had much use for plans anyway. Shrouded in deception and surrounded by temptation, his charmed life explodes in betrayal and tragedy.

DEA Special Agent Emmaline Justice is determined to be recognized for her work, not her sex. She doesn’t have time for an intriguing, wounded RCMP inspector. When the contacts she cultivated over long months of an international undercover investigation keep showing up dead, Emma must use her instincts as both an agent and a woman to determine Beaulieu’s role in the case and in her life.

One woman tore him apart. Another is brave enough to put him back together—if his past doesn’t kill him first.


“You wouldn’t have spent more than two seconds in my company back then.” His voice was rough, like he hadn’t used his vocal cords in a while. She started at the sound, as she hadn’t been expecting him to respond. “I would have taken one look at you, made some comment I thought was clever but would have probably pissed you off, and you would have dumped me right on my fine ass.”
She snorted. “Please, Beaulieu. Who says you have a fine ass?”
Finger tapping his lower lip, he arched a dark brow. Heat warmed her face, but she gave him a grudging nod to acknowledge the silent rebuke. He did have a fine ass, and he knew it. Probably the finest she had ever seen. Conceited bastard.
“You’re attracted to me.” The low rumble of his voice was as unexpected as his words.
Emma caught her breath and went still, poised for flight across the room, but he held her with his gaze.
“I’m attracted, too. Very much. Is that enough for you, Emmaline? Do you expect something more before you’ll have sex with someone? Promises of love, a relationship? You seem the type.”
Oh, he was clever. So very, very clever. She mustn’t forget that. He poked her pride to get her to prove him wrong, to sleep with someone—him—who attracted her without all the pretty words and a promise of commitment. He thought he had her pegged, but she was clever, too.
“What type do I seem to you?” she challenged.
“You seem the type to want dark, desperate things done to you, to do them yourself at least once in your life. You want to experience a man taking you hard, taking you deep, taking you into pleasure so hot you forget who you are. You’d submit your will to that, so long as he can bend your mind and wreck your body, leave you weak and so completely sated you can’t wait to experience it again…and again…and again. You’d be willing, as long as he made it worth your while. And I can. I can do all those things, but I can’t promise you more. Is that enough?”
She stared at him where he sat across the room. He hadn’t moved, but he’d rocked her world. She panted in shallow, short breaths, and sweat slicked over her body from just his words. A quick, sharp shudder wracked her at the thought of what his hands, his body, his mouth would do to her. One side of his lips twitched when he saw her involuntary reaction.
Conceited bastard, indeed.

About Melissa
After being rationed books like most kids get rationed candy, I started writing to tide me over between fixes. I love to get lost in a captivating story, whether reading or writing. Nothing better than being drawn into a story so deeply you don't realize you're turning a page until you've reached the end, and the characters live on in your heat and mind long after the cover has been closed.

I’ve lived in the Mid-West suburbs, Southwest desert, foothills of the Rocky Mountains, and now on an island in the Puget Sound with my husband and dogs.