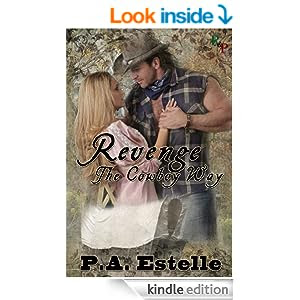 When Brian Thornton is taken by surprise at gunpoint, while in the bed of a beautiful, wealthy woman, he swears his revenge.  But when he learns his humiliation was at the hands of a young woman and a boy, his vengeance knows no bounds.

Joanna Simmons is snatched out of her home and taken to Thornton's ship.  Against her will, she travels to Texas, and then by wagon train to Bastrop, Brian's home town.  Here she finds acceptance and friendship from the folks in town, right down to Brian’s sister, but the emotional war that wages between Brian and Joanna, keeps any kind of happiness at bay.


Brian took a long drag off of his cigarette before flicking it in the fire. “You have quite a decision to make, Jo.” He got up and spread out his bedroll, then took hers and put it on top of his as a cover. “Before you start taking pot shots at me, you might think about what you’ll do out here by yourself.” He undid his holster and laid it down, then slowly shucked his pants and climbed between the two bedrolls. He stretched, putting his hands behind him to cradle his head, and shut his eyes.
“You said there were no Indians this far south.” She was fuming at his relaxed demeanor. He wasn’t showing any kind of fear at all.
He didn’t move. “Do you think Indians are the only danger out here? There are all kinds of men out here who would sell their souls to come across a woman like you, all alone and unprotected.”
She could feel her hopes floating away, like the smoke from the fire disappearing up into the night sky. She threw the derringer at him. “I really hate you.” Joanna sniffed. She took off her shoes and then the pants Andy had given her and climbed into their bedroll, turning her back to him.
He took the gun and lobbed it over next to his. “I want you to keep the derringer. Keep it on you at all times.” He gathered her tightly against his chest, and, to her surprise, that was all he did.

ABOUT THE AUTHOR
P. A. Estelle
I’m Penny Estelle.  I was a school secretary for 21 years, retiring in 2009.  We moved to our retirement home in Kingman, AZ.  We live on 54 acres in a very rural area.  Actually we live “off the grid”, on solar and wind only.  A real adjustment for a city girl.  I love it.  Nothing like walking out your front door and hear coyotes howling and seeing a sky bursting with stars.  It is breathtaking!

I write for all ages – from the very young, to the “Young at Heart” older folks! From time travel adventures to family drama and romances.