#MFRWauthor BOOK SPOTLIGHT: To Snarl or To Snuggle @KatyaArmock 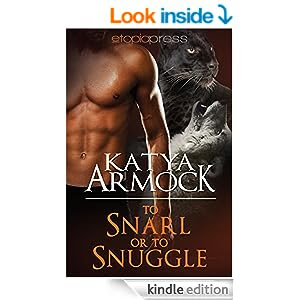 Chloe thinks her life is just about perfect. She’s finally got her psychic abilities under control, her relationship with her father has never been better, and she’s finally marrying her shape-shifter boyfriend Jorge. But when a teenage shape-shifter in need of help leads Jorge’s rival to their door, Chloe’s perfect life deserts her. Chloe’s mother and grandmother find themselves in a psychic feud that leaves Chloe caught in the wake, and a woman with suspect motives insinuates herself into Chloe’s life. Throw in a shocking revelation about the origins of her family’s extrasensory abilities, and she’s not sure she’ll make it down the aisle in one piece, let alone live long enough for a happily ever after…

And she thought meeting her in-laws was tough. She just wants to make it through her whirlwind wedding. Too bad life isn’t cooperating.

Excerpt
“So what was up with your lack of cake enthusiasm?” My best friend Naomi peers at me over her latte.

She clearly knows something is wrong. Usually I love cake, food, all things with sugar and fat. And, of all the tedious parts of planning my wedding, tasting the cake was supposed to be the highlight.

Naomi starts tapping her fingers and her blue-eyed stare means business. I’m not getting out of spilling the beans. Time to woman up.

“I found an old letter I wrote to my mom.” I stare down into my Earl Grey latte and try not to let my emotions run away with me.

“I was sixteen. Wrote it the day I tore up every picture of her I had.” I didn’t need to say more.

Before Naomi can say anything, there’s a commotion at the entrance. A boy, maybe twelve or thirteen, careens into an empty table just inside the door, almost knocking it over. I know puberty can have its awkward gangly growth spurt phases, but this is no ordinary stumbling. At first, I assume he’s drunk or stoned or something—sad, I know, for a young teen— but then I notice some awfully shaggy hair sprouting from his neck and spreading under his shirt.

Shit. He’s a shape-shifter, and by the looks of it, one who isn’t prepared to be going through a transition. Given his age, this is probably his first shift or close to it. Odds say he’s an orphan shifter—born into a family who doesn’t know shape-shifters exist but have some rogue genes in their DNA. Puberty takes hold, and boom, you find out you’re a shape-shifter.

About Katya Armock
I like books that are funny and fun to read (and hot!) but also make me think or look at the world in a new way. These days you’ll find me writing, pet sitting, juggling a number of freelance gigs, and reigning as my home’s domestic goddess. I live in the Midwestern U.S. with my husband, dog and cats. Alas, I have, as of yet, been unable to teach my husband how to purr. I love to hear from readers.