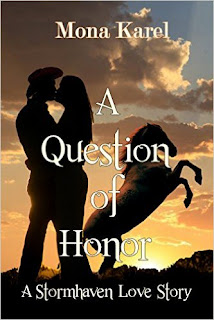 Sydney Castleton has worked hard to put her less than savory past behind her…until her sister asks for her help. Devin Starke has fought too many battles, seen too many deaths, to look forward to a peaceful future…until his best friend and partner asks him to help return the horse his wife, Sidney’s sister, took when she left.

Stormhaven, a ranch in northern New Mexico, has become a place for fighting men to readjust to the world, a sort of decompression chamber for those who have seen too much. Devin Starke is such a man. And Sydney isn’t far behind him.

Can a woman with a past find love with a man who thinks he has no future ?

A REVIEW
AYLOR JONES SAYS: "This book, like the others Karel has written, shows a depth of understanding of people and their relationships. You can’t help but root for her characters as they struggle to find their way through unique trials and tribulations. The story has a good strong plot that will keep you turning pages, but it’s the charming, heart-warming love story that will have you reading this one again and again."


She knew that walk. With a slight hesitation in one leg, he prowled like a wounded predator, conditioned to succeed against the most dangerous game of all. Even limping, his reactions would be instantaneous, his balance superior. By itself, his body would be a weapon. He’d be the best man to have on your side in a battle. After the battle, he’d unwind with a drink and a woman. The drink would be strong and straight. The woman would be bosomy and not too bright. He’d very likely spend more time with the drink than the woman.

Sydney Castleton let her mind drift through bitter thoughts and buried memories as she waited for the man who proclaimed danger with every step he took toward her. He was no different from the men who’d worked with her father: soldiers of fortune, whose luck could run out at any minute.

What trouble had her sister gotten her into this time?

ABOUT Mona Karel
Mona Karel is the writing alter ego of Monica Stoner. After a life time of wandering the country, she settled on the high plains of New Mexico, where she writes about love fought for and found, in an array of genres. When not writing, she is showing and judging Salukis, taking pictures of New Mexico sunsets, and facing life head on.