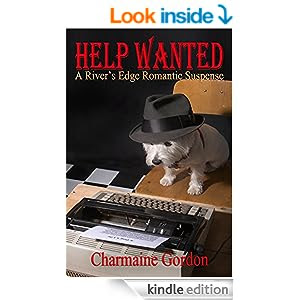 Steve and Sally Atwood have some big adjustments to make when they move to River’s Edge. Steve has lost his career in the corporate world and finds work painting houses. Sally flings off her apron and pursues her lifelong dream to be a reporter in the small town with a big heart, where the motto is ‘Kindness to Strangers’.

Afraid he is losing Sally to a more exciting world, Steve panics, but despite Sally’s lecherous new boss, together they rediscover all the love of their thirty-five years together and the excitement that brings.

REVIEWS
"Readers can take a walk on the wild side (not Lou Reedish) in one setting with this quick easy read. Perhaps some readers, such as this reviewer, will consider it a bit “wild” for a couple who have been married for thirty-five years to flirt with infidelity. They will both be tempted. What made me feel this was a bit unusual was that the couple we meet in ""Help Wanted"", is introduced as happy empty-nesters. Couples can appear to be happy to the outside world, but are they really? The plot resonated with me because I shocked friends and family by ending a marriage after twenty-six years and three different marriage counselors. (It had been dead for years, but that’s another story.)

""Help Wanted"" is the second in a trilogy of stories billed as “A River’s Edge Romantic Suspense.” Charmaine Gordon writes books about women, baby boomers, who survive and thrive. Her motto is, “Take one step and then another to leave your past behind and begin again.” Gordon has been busy turning out six books and several short stories in three years. She’s always at work on the next story. Charmaine Gordon may be the hardest working author I know, certainly for a woman whose children are baby boomers.


Meet Steve and Sally Atwood.
He was recently given a golden handshake without the parachute.
Now the white shirt and tie guy is a handyman around town.
She’s looking for work.
She hopes to find an outlet for her creativity and journalistic talents.
Both are surprised when they discover what each really seeks and how their personal needs at this point in their lives converge and diverge.
Therein lies the suspense.
Can they manage what they find out about themselves and each other?
Life throws us curves and fastballs every day. How big is the strike zone and can the Atwoods manage the change-up pitch?
Adult readers of all ages can identify with the Atwoods and will be challenged to question themselves and the decisions they make. Cultural references will certainly appeal to boomers and the author has thoughtfully included explanations for the younger reader to connect.
Readers will also enjoy a vicarious performance for military veterans by canine performers representing Paws for a Cause.
Most baby boomers I know would still be teenagers were it not for mirrors and cameras.
The Atwoods are no different.
Will they have a happy ending?

ABOUT Charmaine Gordon
I kissed my acting career goodbye, leaving on a high note with the lead in an Off Broadway play, “The Fourth Commandment” by author Rich Knipe.  “It was great fun and time to move on since my voice was gone, kaput, bye, bye,” Before that, I had a full schedule working on movies like “Working Girl”, “Road to Wellsville” and having the pleasure of Anthony Hopkins’ company at lunch.  I worked with Mike Nichols in “Regarding Henry” and sang outside with Harrison Ford during “Working Girl”, cried with Gene Wilder over loss on another set, and sang ‘It Had to be You’ with the whole cast of  “When Harry Met Sally”.  There were lots of fond memories; “Especially my first job as a stand-in leg model for Geraldine Ferraro in a Diet Pepsi commercial with Secret Service men guarding Ms. Ferraro and her daughters.  Eleven years on One Life to Live, a few years on All My Children, Another World kept my calendar full.”