Find out on #Thursday13 about #MFRWauthor Iris Blobel's More Beginnings


#MFRWauthor Iris Blobel was born and raised in Germany and only immigrated to Australia in the late 1990s. Having had the travel bug most of her life, Iris spent quite some time living in Scotland, London as well as Canada where she met her husband. Her love for putting her stories onto paper has only emerged recently, but now her laptop is a constant companion.
Iris resides west of Melbourne with her husband and her two beautiful daughters.
Next to her job at a private school, she also presents a German Program at the local Community Radio. 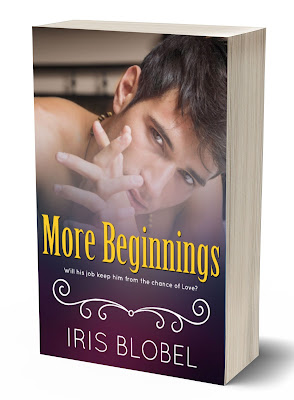 Blurb
Zach Taylor, an escort in Sydney, living in Hobart, enlists the help of Natasha Peterson when his teenage friend, Mia, runs away. He soon finds out that the 'dragon' is really more of a kitten. And although Natasha, Mia's teacher, is attracted to him as well, she has her own problems to deal with, not to mention her initial reaction to Zach's occupation.

Will Zach's job keep him from a chance to be with Natasha?

Life is good for teenager Mia Levesque. But when Darren Schuster shows up in Hobart, she knows something is up once Sophie and Mark cut their weekend away short and rush home in the middle of the night. When Sophie won't answer Mia's questions, emotions run high, and Zach confirms Darren's identity to Mia. Disappointed, angry, and feeling alone, Mia runs away.

Will life settle back into a routine for Mia once she finds out about the stranger in her life?

1.       “You don’t look like a dragon at all.”
2.       “How did this conversation go so out of control?” she asked.
3.       “My apologies, but I think I’m needed over at the… well, somewhere.”
4.       Bed sheets, secrets with a teenager, boys coming over - he was losing control of his life!
5.       There were about a thousand answers going through Zach’s mind, from your worst nightmare to the man who was next to your ex-wife’s bedside when she died, or even your daughter’s babysitter.
6.       Slowly, he placed a pillow on his legs to cover up the effects of his nice dream.
7.       With an intensity only a teenager could come up with, she stared at her feet, avoiding his gaze
8.       The girl cursed like a trooper, and for once he let it go.
9.       “Okay, short version is, Sophie’s in hospital with an early labour, it seems. Mark’s with her, and Mia’s run away after hearing some unsettling news.”
10.   He had guarded his heart for years, but it seemed this time, he’d lost.
11.   It nearly broke his heart when he heard her sobbing on the other end of the line.
12.   A smile spread across her face, and everything inside him melted.
13.   “I felt completely alone today. As in,” she hesitated and wiped more tears. “I missed my mum and deep inside I was hoping for a dad. A dad who’d care for me. Or listen to me. Does things with me. You know?”


Subscribe to Iris' Newsletter and receive a FREE copy of New Beginnings:  http://eepurl.com/b-U0G5
No comments: