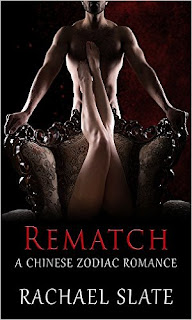 Rematch is book 1.5 in the steamy fantasy romance series about the Chinese Zodiac. If you love dirty-talking alpha heroes, tough heroines who challenge them, exotic cultures, and unique twists on mythology, then this series is for you! Will they be the best match...or the worst?


Her free hand flattened against his chest and he inhaled sharply at the warmth of contact. He hadn’t permitted anyone to touch this body. Hadn’t ever wanted anyone to. With her, the yearning was almost unbearable. He desired her hands, her mouth, her tongue. Everywhere.Her stroking lightened as she trailed her fingertips downward.He swallowed hard. He ought to stop this, whatever it was, but hell, curiosity demanded he allow her game.Her fingertips left his bare flesh, one by one, until only the tip of her index finger continued its downward path. An inch above his waistline, she paused. Her gaze flicked back up to his, one eyebrow arched. Was she asking his permission? Bloody hell, no way she’d missed the thick outline of his erection.She drew her bottom lip between her teeth. Indecisive? Perhaps he should encourage her exploration. He bent forward and feathered his lips against hers. Once. One taste, and then he pulled back.Her mouth parted, those soft, velvety lips inviting him deeper. He eased his grip off her throat and caressed his hand along her collarbone. Her warm, sweet breath heated through his body, making him shudder with need. Pressing his lips to hers again, he flicked his tongue along hers slowly, careful not to unleash too much passion upon her. She was mortal, after all.Delicate and fragile.She moaned, her body melting against his as she lifted her leg to stroke her knee along his thigh. Coaxing him closer. He released her other hand and she glided it across his abs, her exploration firing explosive sparks over his skin.This tight leather outfit she wore provoked him. Taunted him. He yearned to peel it off her. With his teeth.As he thrust his tongue inside her mouth, he skimmed his hand over her pert breast and around to grab her *ss, aiding her thigh higher. Cradling his hips against hers, he ground their lower bodies together.Suddenly, she wrenched her lips off his, twisting her head to the side. Her skin was flushed, her breathing in irregular pants. She clearly desired him, so why had she stopped?“I believe this belongs to you.”

ABOUT Rachael Slate
Rachael Slate resides on the West Coast of Canada with her husband and two children—or as she likes to call them, her own little blended world. One of the best parts about sharing in her husband’s Chinese-Malaysian culture is definitely the food—and the awesome celebrations!

Rachael writes stories that blend the lines between mythology, reality, and fantasy. In her worlds, you’ll encounter strong, sexy alpha males and the capable women who challenge them. And always, scorching hot romance.