Happy New Year! Welcome to day 2 of 2012. What, you say? Day 2? *nodding* Yep, day 2 of MY New Year. Having a birthday in January for me has always meant that the New Year doesn't start for me until that day. And, since my birthday was Monday. . .well, you get my drift. So, Happy New Year!
And a good year it promises to be. Last year at this time, I was having unexplained dizzy spells. They weren't bad, but I didn't like the fact that the room would shift without warning when I was walking. Unfortunately, it was the busiest time of the year for me, so I made a doctor's appointment for the middle of March. By the end of January, the spells had stopped, but I went to the appointment in March anyway. After some tests and a variety of appointments, I had surgery in July. I suppose if there was such a thing as 'routine' brain surgery, I had it. I went into the hospital on Friday and was released on Monday. Of course, I spent the next month at home recuperating.
In the meantime, my daughter got engaged in June. At first she and her fiancé considered a September date. Thankfully, they didn't think I'd be up to it (and they were right), so the date was moved out to December. Needless to say, that ended the year on a high note. Not even Christmas compared to the wedding. It was beautiful, and my daughter was as happy as I'd ever seen her.
Unfortunately, no writing has been done since I came home from the hospital. It was fortunate, then, that I had one book already contracted, and had finished the book I was working on -- sending it off just the day before my surgery.
So, now it's a new year and I'm looking forward to learning and writing more and, of course, reading lots of great books. Are you looking forward to a year of good books to read? I hope you will consider trying one of mine.
Denise
Website: http://www.denisepatrickauthor.com/
Blog: http://denisesden.blogspot.com/
The Scarred Heir
Buy from Samhain Publishing: http://store.samhainpublishing.com/scarred-heir-p-6611.html
Buy from Amazon: http://www.amazon.com/The-Scarred-Heir-ebook/dp/B006IX7F0G/ref=sr_1_8?s=digital-text&ie=UTF8&qid=1326171308&sr=1-8
Buy from Barnes & Noble: http://www.barnesandnoble.com/w/the-scarred-heir-denise-patrick/1107899144 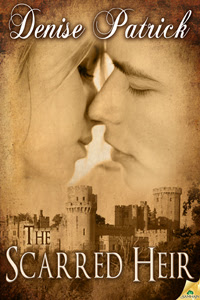 He stood abruptly. “We will finish this discussion upstairs.” If Dodson hadn’t gotten rid of her uncle, he might yet have no other choice, but he would not have this discussion here, in public, where someone might overhear.
Minutes later he ushered her into a blessedly empty sitting room. Dropping her pelisse and reticule into a chair, she crossed to her room and checked inside. He did the same for his room, noting that his trunk sat open beside the bed. Neither servant was present.
Sarah stood in the center of the room, her features pale. Uncertainty hung over her like a cloud. He tried, unsuccessfully, to steel himself. She had to see that marrying him was wrong for now. He had no idea what the future might bring, but at this time it was the wrong choice.
Large blue eyes watched him as he crossed the carpet toward her. He meant to stop before her, far enough away so he couldn’t touch her, but he couldn’t resist the lost look in her eyes. Before he knew it, he was holding her, enjoying the soft curves pressed close, the sweet smell of flowers in her hair.
She trembled and pressed her face into his shirtfront, sliding her hands beneath his coat and around his waist.
“Why?” The question was whisper soft.
“Because I can’t. I cannot allow you to make such a choice out of fear.”
She raised her head. “It wouldn’t be fear. I understand what I’m asking.”
“Do you?” His lips quirked. “Have you thought about all the possibilities? What if we find your father alive? You will have taken the step unnecessarily.”
She sighed. “Perhaps, but if my uncle were to have forced me to it, I would still be married, and whether my father was alive or not wouldn’t matter.”
He sighed. “You are right, but your uncle will not force you—and neither will I.”
She huffed and stepped back. “You wouldn’t be forcing me—”
The door opened and Dodson entered, followed by Annie. Sarah gasped in horror at the sight of the maid’s face. There was a large bruise marring her features and her lip was swollen.
“Annie. Oh Annie, what happened?”
“I tol’ him I didn’t know where you was, an’ he hit me. Said he didn’t believe me.”
Sarah hurried over to the maid and took her in her arms.
Dodson looked at Max. “I started packing. The uncle said he’d be back with a magistrate. I figured you didn’t still want ta be here.”
“Heavens no,” Sarah interrupted. She looked at Annie. “Come, I’ll help you finish my packing.”
Thirty minutes later they were pulling away from the Pulteney and Sarah began to relax. She was thankful her order from Mme. Marchand had arrived and they were able to pack it as well. Yet she wouldn’t have quibbled at leaving it behind had it been necessary.
While she and Annie packed, she’d replayed the conversation over luncheon in her head. She remembered the moment she realized she wanted to marry him. It was the same moment he’d admitted he would be nothing more than a fortune hunter. It was also the moment she realized she’d fallen in love.
She turned her face to the window, sightlessly watching the streets of London roll by. For now, she’d have to let him have his way. His promise to take her to France was driving him at the moment. Maybe when they reached Calderbrooke, before the information from the solicitor arrived, she’d talk to him again.
Regardless, she’d bring him around. He cared for her. His refusal to consider marrying her for financial reasons told her that. But her dowry was substantial. Would that make her off-limits to him forever?
1 comment: