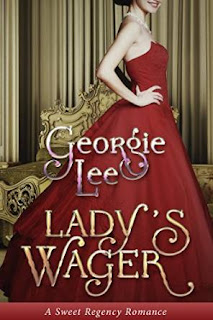 Charlotte Stuart is an heiress who's been betrayed by the false love of a fortune hunter before. Lord Edward Woodcliff, made leery of marriage by his father’s disastrous second marriage, feigns poverty in order to find a woman who loves him and not his wealth. He loses his heart to the spirited Charlotte, but her fear of being betrayed, and his hesitation to make a matrimonial mistake, prove difficult to overcome.

All seems hopeless until Edward challenges Charlotte to a wager. If he wins, he gains her hand in marriage. If he loses, then Charlotte is free of him. Charlotte accepts the wager only to lose her hand and her heart to Edward. Now Charlotte must put aside her fears of being betrayed by love long enough to let Edward into her life and admit he is the man of her dreams.


An independent heiress and a stubborn Viscount stake their hearts and their futures on a wager. BUY LINK


“Miss Stuart, young ladies don’t usually frequent this section of Hookham's.”
The strong male voice startled Charlotte, causing her to drop her books. She spun around to discover Lord Woodcliff behind her, his blue eyes beneath his solid brow fixing on hers with stunning intensity. She’d been so lost in thought she hadn't heard him approach. Now, with him before her, every notion deserted her except for fascination with his smile and the way the light from the windows fell over the solid curve of his shoulders. He stood a good head taller than her, his chest wide and sturdy beneath his well-fitted coat of dark green wool.
He laid his book on the shelf then bent to retrieve hers from the floor. His arm muscle flexed beneath his sleeve as he held the weight of the tomes he stacked in the crook of his elbow. His strength proved as stunning as his sudden appearance, and the pull of his dun colored breeches over the curve of his knee. She shouldn't be admiring him, or allowing him to assist her, but she couldn't help herself. There was something about his confidence and the ease with which he moved which captured her attention.
He paused to examine the slimmest of the tomes then glanced up, one eyebrow arched. “I thought ladies shunned such subjects as surgery and disease?”
His comment snapped her out of her unexpected and unnerving fugue.
“I've heard a great deal today about gentlemen’s expectations of ladies.” Charlotte snatched the book from him. “Gentlemen would do well to learn not all ladies are hen-witted.”
“I’m glad to hear it, for society is already overrun with wet geese.” He rose and beneath the high linen of his cravat, his neck muscles tightened as he held out the stack to her.
Charlotte studied him in an attempt to discern if he was mocking her or if he was serious, but his expression held no hint of the arrogance he’d exhibited at the Royal Academy.

ABOUT Georgie Lee
A lifelong history buff, award winning author Georgie Lee hasn't given up hope that she will one day inherit a title and a manor house. Until then, she fulfills her dreams of lords, ladies and a season in London through her stories. When not writing, she can be found reading non-fiction history or watching any movie with a costume and an accent. Please visit  www.georgie-lee.com to learn more about Georgie and her books.