#MFRWauthor INTERVIEW: When The Band Came To Town @HLewisFoster

Meet H. Lewis-Foster
H. Lewis-Foster lives in the north of England and has always worked with books in one form or another. As a keen reader of gay fiction, she decided to try writing herself and is now the proud author of several short stories and a debut novel 'Burning Ashes'.

H. creates characters that are talented, funny and quite often gorgeous, but who all have their faults and vulnerable sides, and she hopes you'll enjoy reading their stories as much as she loves writing them. H. has also ventured into playwriting and was thrilled to see her first play performed last year.

How long have you been writing? About five years.
Have you always wanted to be a writer?
Secretly, yes, but it took me a long time to finally put pen to paper.
Where do you see yourself in five years?
Still writing romance, because I enjoy it so much, and maybe doing more play writing.
How many books have you written, how many have been published?
I’ve written one novel, two novellas and ten short stories. They’ve all been published.
After you've written your book and it's been published, do you ever buy it and/or read it?
I sometimes read a story a year or so after it’s been published - it’s good to go back and experience it as a reader.
Do you have a favorite among your books?
My novel ‘Burning Ashes’. I loved writing about the intense romance between Nat and Scott, and following their relationship over the years.
Favorite hero or heroine?
My current favourite is Archie in ‘When the Band Came to Town’. He’s intelligent, handsome, physically and emotionally strong, and he’s always there for his friends.
What book for you has been the easiest to write?
Northern Relations, a regency romance.
The hardest? My current novel – more details soon!
The most fun? In the Blue Moonlight, a funny, quirky short story.
Which comes first, the story, the characters, or the setting?
My stories are very much character-led, so characters definitely.
What is the hardest part of writing/the easiest for you?
To be honest, I enjoy the whole process of writing, but I guess that editing is the hardest part – although if you have a good editor, it can be very rewarding.
Are you in control of your characters or do they control you?
I like to think I’m in control, but sometimes characters take the plot in unexpected directions.
Have you experienced writer's block?
I’ve been very lucky and haven’t been stuck for ideas so far.
What is the most rewarding thing about being a writer?
It’s fantastic to read a lovely review - knowing that someone has enjoyed your writing makes it all worthwhile.
What is the single most important part of writing for you?
Rewriting is the most important part of writing. Finishing the first draft of a story is just the beginning.
What do you enjoy most about writing?
Getting that initial idea, then seeing where the story takes me... 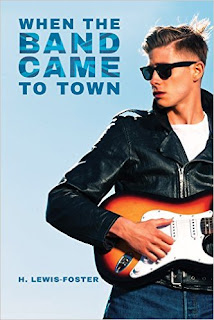 When the Band Came to Town
Dreamspinner Press
In the swinging Sixties, life gets rockin’ for Jeff McInnery when a new band plays at the local pub. Caught up in lead singer Danny Speed’s cool, Jeff sneaks a kiss. But being found out as homosexual could stop Danny’s hot career fast, and even land him in jail. With harsh words, Danny leaves to head for fame and fortune while Jeff starts university. On campus, Jeff meets Archie Ballatine, a history student living as openly as possible. It’s an exciting new world of sex and friendship for Jeff, but then the band comes back to town.
BUY LINK

MM Good Book Reviews - 5 hearts - https://goo.gl/LpAXzx
This is a nice, short and exceedingly charming story which I realised once I got to the end is actually meant to be more like a memoir of Jeff McInnery. In a time where in the UK one could get arrested and gaoled for being homosexual, it’s a bit like a journey of discovery into love for Jeff and his two love interests – rock star Danny and fellow student Archie. It’s a very light hearted/rose coloured view of this time in history but the ending is just perfect!


“Have you never had a girlfriend, Jeff?”
Jeff shook his head, hoping Danny would assume his abstinence was due to failure rather than choice. His pulse quickened as Danny walked toward him.
“We’ll have to do something about that, won’t we?”
“It’s not a problem.” Jeff stuttered the words, and his racing heart nearly stopped when Danny seized his clammy hand. “You need to learn how to slow dance, man.”
Jeff’s knees trembled so much he could barely stand as Danny slid his other hand round Jeff’s waist.
Danny’s voice was affably self-assured. “Now the young lady will expect you to take the lead, Jeff.”
“Oh yes?” They were the only words Jeff could extract from his brain.
“You hold her in your arms like this.” Danny pulled Jeff to him, his lean torso pressing against Jeff’s shirt. “You see?”
Jeff nodded. The proximity of Danny’s body now made speech impossible.
“Then you move your feet in time with the music. Just little steps like this.”
Danny’s thighs brushed against Jeff’s trousers as they shuffled around the wooden floor. Jeff was sure Danny must be able to feel the quivering in his muscles, the quickening of his breath, and the growing hardness in his underwear.
“And if you’re very lucky, she’ll nuzzle your neck, and her hair will tickle against your cheek.” Jeff held his breath as Danny’s faintly stubbled chin rested against his shoulder. He was certain he must be dreaming, but he’d never had a dream as vivid as this.
Danny’s biceps were hot against Jeff’s shirtsleeves, and his fingers tightly curled round Jeff’s hand. His tobacco-scented breath was warm against Jeff’s ear as he spoke. “That’s it, Jeff. You’ve got the hang of it. You’ll have those posh university girls eating out of your hand.”
Girls, posh or otherwise, were the furthest thing from Jeff’s mind when Danny pulled away slightly and smiled. Jeff had never seen a smile like it, or at least not outside of a cinema screen. Danny’s teeth were beautifully even and white, his lips the pink of a freshly picked plum, his eyes green and twinkling in the low light. Then the music stopped, and Jeff expected Danny to step away with a jokey comment about his dancing, but Danny stayed where he was, his face only inches away. Danny’s smile faded uncertainly, but he didn’t move away.