A QUICK AND QUIRKY #MFRWauthor Interview To Save a Lady @Pat_Preston

A Quick and Quirky Interview with MFRW Author Patricia Preston
Patricia writes stories that have strong characters, some humor, some romance, some adventure, and lots of emotion. She has won several awards for her fiction, and she is currently working on a series, the French Quarter Brides and a series of contemporary romances set in  Lafayette Falls, a fictional city near Nashville. She had a Western romance available from Carina Press entitled Almost an Outlaw, and two humorous short stories, “The Yard Sale” and “Laid to Rest” available on Amazon.

If money were not an object, where would you like to live?
I’d love to live in a townhouse in the French Quarters where I’d have access to Pat O’Briens and Café Du Monde on a daily basis. Gotta love them beignets and Hurricane cocktails.

If you were a tool, what would people use you to do?
I bet somebody already said ‘screwdriver’, huh?

What song best describes your life?
“Another Day in Paradise”

Picture yourself as a store, what would be sold there?
Definitely books and music. There would be free e-readers and internet access. And there’s a music room where you can sample an entire song instead of a 30-second clip. And you can sit in massage chairs and chill with music and books. Also, there’ll be a wet bar. Yes and maybe pole-dancing classes. We’ll call the store Books, Ballads and Bottoms Up! We’ll open soon.

What is your secret guilty pleasure?
I don’t think you should attach the word guilty to pleasure. You should never feel guilty about enjoying yourself, regardless of what that involves. Just make sure you don’t electrocute yourself and remember you can take guilt-free pole dancing classes at my store.

If you were stranded on a deserted island, who would it be with?
Rick and Daryl from The Walking Dead!!! They know how to survive and plus they are sexy and Southern. That’s a plus, y’all.

What is the funniest thing that ever happened to you?
Besides being born?

If you were on a reality show, which one would it be?
Well, I don’t watch reality shows. Maybe America’s Got Talent for Writers. Everyone gets up there and reads a chapter…Naw…What about a bunch of redneck pole dancers taking classes at Bottoms Up. They are vying to a win a spotlight performance at Big Earl’s Place. You gotta let your imagination go there, people.

Tell us about your latest book.

To Save a Lady, Book One, French Quarter Brides 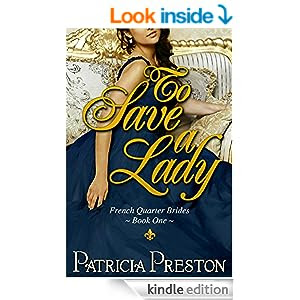 
Romance & Adventure in old New Orleans. . .
A move from Paris to New Orleans brings disaster to Elise Plaisance’s predictable life as a lady’s maid. The son of her grief-stricken mistress disappears, and Elise is drawn into a web of espionage and lies as war threatens the city. Captain Jesse Cross doesn’t fancy himself as a lovelorn soldier desperate for a woman until a mysterious French spy captivates his imagination.

Elise’s romance with the captain is a frail illusion, born in the darkness of a French Quarter courtyard and never meant to last forever. Amid war and betrayal, Elise must risk everything to rescue her mistress’s son before all is lost, and Jesse knows he has to save her even if it means sacrificing his honor and his life.

During the War of 1812, a dauntless American captain and a desperate lady’s maid from Paris finds romance and danger in the sultry French Quarter of New Orleans.

EXCERPT
December 1814
Captain Jesse Cross strode through the blanket of thick fog that rose from the banks of the Mississippi river and filled the dark streets of the French Quarter. A discarded playbill from an opera house lay in a mud puddle, and the muffled sound of piano music came from a closed theater where a musician practiced after the show.
New Orleans was on the brink of war. Nevertheless, on any given night, a man could attend an opera, a play, or a concert in this muggy city filled with wealthy residents who loved to be entertained.
Also, on any given night, a man could be robbed, shot, or stabbed to death. Crime thrived in the cultural city, which had its share of cutthroats and thieves who prowled the streets at night, looking for unwitting victims.
Jesse had no plans to become one of those victims.
The navy greatcoat he wore over his uniform brushed the tops of his riding boots and concealed the flintlock pistol he cradled against his thigh. As the moon ducked behind a cluster of heavy clouds, he listened carefully to the quiet footsteps that echoed his own. He had been followed since leaving a tavern on Rue Dauphine.
He continued at a steady pace, walking south on Rue Toulouse. Townhouses and shops jammed against sidewalks called banquettes in this city where French was the primary language.
The midnight hour approached. The houses were shuttered, and the streets deserted. There was no good reason to think the man trailing behind him was just out for a jaunt, not in the middle of a winter night.
Jesse picked up his pace as the damp, cold air breezed about him.
He longed to be elsewhere. Lying in front of a warm fireside, with a glass of good wine and a woman eager to ride him. That would be such a joy right now. When had he last known such pleasure? He would have to dig deep in his memory to answer that question.
He tightened his grip on his pistol. The sound of footsteps grew closer. Faster now in the darkness. Coming up behind him while he walked along the banquette as if he suspected nothing. He drew in a steadying breath.
There was nothing like the element of surprise.