Molle McGregor’s writing career started when she was seven and suffered terrible insomnia. Night after night she couldn’t sleep until long after mid-night, only to wake a few hours later. Frustrated with her inability to just go to bed, (and her penchant for sneaking a book and a flashlight under the covers) her grandmother said, “You like to read so much, why don’t you tell yourself a story until you fall asleep.” With this brilliant advice, Molle’s overactive brain was off and running. Now, years later, she’s finally taught herself to sleep, but she’s never stopped telling stories.

Today, MFRW asks her questions about her writing...

Generally, how long does it take you to write a book?
Between eight to ten weeks for a full length novel. A novella takes me about a month. That’s for the first draft. I wait about a month before I work on the second draft, to give myself some distance from the story and work on something short, like a novella, between drafts. The editing process takes a few months since I coordinate with my developmental and copy editors. From start to finish is about six months, but most of that time I’m also working on other projects.

Do you have a set schedule for writing or do you just go with the flow?
A set schedule. I have two young sons at home, so if I didn’t schedule, nothing would get written. I work in the morning from about 5:30 am until around 8:30,  with a few interruptions for breakfast and cartoons. Then again in the afternoon during nap-time. I’d love to write in the evenings, but I usually fall asleep not long after the kids...

Tell us about your latest book, including its genre.
Shadow’s Passion is the prequel novella to the paranormal romance series - The Shadow Warders. The Shadow Warder Series features two ancient races of demon hunters, the Shadows and the Warders, each with unique talents and skills. Created work as bonded pairs, protecting humanity from the Vorati demons, the Shadow and Warders split apart after a terrible betrayal. Centuries later, they must learn to work together again if they are going to stop the rise of the most powerful Vorati in history.

The series follows the first bonded pairs of Shadow and Warders as they meet and find their mates, as well as battle the growing threat to their world. The first full length novel in the series will be released in mid-August 2014 and the second in December. All the books will take place in the Shadow Warder world, but will feature a different hero and heroine.

What does your husband/wife think of your writing? Do you ever ask him/her for advice?
My husband is my biggest fan. He’s the first to tell people what I do and encourage them to read my books. If I ever doubt myself, he’s there reminding me to keep going. He’s also a great beta reader. When I wrote my first fight scene, he came back with a page of notes. And I ended up using most of them.

How do we find out about you and your books? How can readers/fans contact you?
Goodreads is the best place to find me. I’m on there every day and love to chat with readers. Feel free to friend me or send me a message. If you do, I might even offer you an ARC!

Do your fans' comments and letters influence you in any way?
Absolutely. So far I’ve been fortunate in that my fans are enthusiastic about my work and have had mainly small criticisms. But I love discussing the story with my readers. For Shadow’s Passion, I had a prologue that my editors and I decided didn’t think fit the story.  I posted it on my website as a deleted scene and my readers love it! I actually have a discussion going on the book’s Goodreads page. If enough readers want to prologue added back in, I’ll release an updated edition with the prologue included. While the stories I tell come from my own imagination, once I release them into the world, they also belong to readers. I’m not saying I’ll take every suggestion, but I certainly consider reader’s opinions. 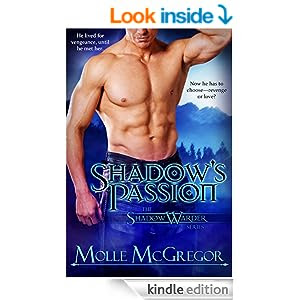 Celeste is an exiled Shadow healer with a power so unstable she’s considered a deadly menace. After so many years on her own, she’s getting a little bored. And more than a little reckless. When a nearby family falls victim to demon infection, she decides to go hunting. But without backup, it won't be long before the demons are hunting her.

A Warder assassin dedicated to avenging his brother’s death, Gabe doesn’t have time for distractions like a beautiful Shadow looking for trouble. Until he discovers his target is after Celeste. Now, nothing will tear him from her side.

Celeste knows better than to team up with a Warder, but she's not sure she cares. It's been a long dry spell since her exile. Neither of them expects their fling to turn into something more. Now Gabe has to make a choice: revenge or love?

He lived for vengeance, until he met her. Now he has to choose - revenge or love?
AMAZON BUY LINK

Have you received feedback from reviewers?
Yes! Here are what some are saying...
"Shadow's Passion is a Prequel Novella to The Shadow Warder Series only about 131 pages but I am going to say WOW to those 131 pages. I read it in one seating and it is a very compelling story.
I love a story that pulls you in and gets your emotions involved and this story about Gabe and Celeste's does. There is one part that you know something bad is going to happen and it does and it made me cry my eyes out. I had to stop cause I couldn't see the words, I would dry them and read a little more and there I am crying my eyes out again. This is a very good beginning to a promising series that I will be looking forward to reading." - Ellen @ Goodreads


Celeste crouched in the underbrush, her body curled into a tight ball. Breath silent, she tried to ignore the damp chill sliding beneath her clothes. The electric blue sky above the tree canopy would have fit nicely with a warm summer day. If she wasn't freezing her ass off crammed under a dense rhododendron, she would have appreciated the way the sky brightened up the chilly winter afternoon. At the moment, the cold—and the predators surrounding her position—occupied all her thoughts. She'd left her home that morning on a scouting mission. An ambush was not in the plan. Unfortunately, the plan had changed.
The Vorati demons were everywhere. So far she'd counted six. Not certain where she hid in the thick growth, they worked their way in a shrinking circle, using scent to triangulate her location. To a Vorati nose, a Shadow smelled better than a sizzling steak might to a starving human. If they hunted her for too long before they found her, the enticement of her scent might drive them into a frenzy. She'd heard what frenzied Vorati could do to a victim. Eons ago, when they'd been in their demon bodies, they'd eaten their victims raw. Apparently, a frenzy brought them back to the old days. Enough said. Not an appealing end.
Over the past few weeks, Celeste had been picking them off one by one in carefully planned guerrilla attacks. Since her first strike, it had been a matter of time before they took the offensive and came after her. The demons moved around her position, faces raised to sniff the air, tightening the noose with each breath.
To an outsider, they appeared to be normal humans. They'd even dressed in hunting gear, holding their rifles and shotguns with ease, their brown camo a perfect match for the leafless trees of late winter. They might have brought the guns to hunt game. Might even have left their nest with the intention of bringing home fresh meat. The Vorati wouldn't use the weapons on her. If they caught themselves a Shadow, her death would be far slower than one granted by a bullet.