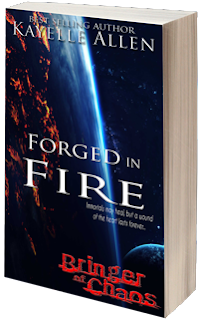 In this scene from Bringer of Chaos: Forged in Fire, the immortal king, Pietas, is surveying the alien world where he's been exiled. Sempervia is a beautiful planet, but it's not fully terraformed and it harbors dark secrets of its own.

Sempervia, year 1 in exile
The summit lay a good distance ahead, but they had left the forest. Scant grasses and scrubby bushes dotted the landscape. He pushed further up the mountain, where hand over hand, he climbed up among black boulders. Their pockmarked texture stung his palms but did no harm to his feet. He'd hiked half the planet barefoot. Panting from the quick exertion, he turned to take in the view.

Across plains to the east, low-scudding clouds skimmed a fringe of mountains, no more than blue smudges on the horizon. Their white tips implied great height. North, the lazy river he and the human had followed from its source snaked its way across the savannah, a necklace of shimmering gold. The path took seconds to trace with his gaze but had taken them weeks to walk. As it wended its way further south, the confluence of its mighty waters with another river turned its gold to muddy brown.

What worried him were the sheets of gray in the northwest. A storm marched straight toward them. The heavy, pelting rain on Sempervia so saturated the air one could drown on land. They did not dare let it catch them in the open. They needed to cross the summit and reach shelter.

He braced both hands on his knees. How galling to need a break. He'd hiked less than five hours. Was he no better than a mortal?

Before his exile, Pietas would have run--not walked--up this mountain without a single pause. When mortals and traitors among his kind imprisoned him in an unpowered life pod and left him to rot for over a year, it broke his health and shattered his stamina.
Had it not been for his friend, Six, what sanity Pietas possessed would have been as beaten and battered as dirt clods trampled in a horse paddock. Though unable to free Pietas, Six had stayed with him day and night, talking, whistling, singing songs, sharing life and light through his tales.

Long after Pietas could no longer respond.

Broken in body as he was, his will, determination, and drive survived intact, as had his undying thirst for revenge.

No doubt his enemies thought to teach him a lesson. Having endured the worst they could muster, he'd learned there was no pain he could not bear, no matter how horrific. One day, he'd return the favor and teach them. 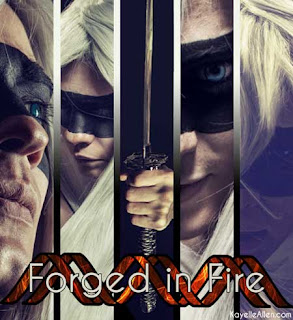 When the immortal Pietas is marooned on a barren world with no food and few survival tools, he knows it could be worse. He could be alone. But that's the problem. He's not.
Half a million of his people sleep in cryostasis, trapped inside their pods and it's up to Pietas to save them. He can't release one at a time. It's all or nothing. He's facing over five hundred thousand hungry, thirsty, homeless, immortals all looking to him for answers.
It's not all bad. The beautiful telepathic warrior he's loved for lifetimes is at his side. He's bonded with a sentient panther. He hates humans but the one dumped on this planet with him has become a trusted friend.
But before Pietas can build shelter, figure out how to grow food, or set up a government, he must take back command from a ruthless enemy he's fought for centuries. His brutal, merciless father.
Immortals may heal, but a wound of the heart lasts forever...

Bringer of Chaos: Forged in Fire has no profanity or explicit content, but lots of angst, a little humor, some sweet romance, and a ton of betrayal with plenty of vengeance. Oh, and let's not forget--one ginormous black "kitty".