MFRW Author Neil S. Plakcy released The Noblest Vengeance (Have Body Will Guard #6),
a GLBT Romance, with Loose Id on May 13, 2014.

The Noblest Vengeance weaves together the heritage of Sephardic Jews and the tensions in modern-day Turkey with a sexy, fast-paced romance that tests the relationship of bodyguards Aidan Greene and Liam McCullough.

Does the threat they face come from a hidden secret tied to the Nazi invasion of the Greek town of Ioannina, a center of Sephardic culture? Or has it arisen because of plans to develop one of the last open spaces in Istanbul, Gezi Park?

The real danger to their relationship, however, may come from their very different ideas about family connections. Can their love withstand assassins with a deadly secret to keep hidden, a trip back home to New Jersey – and Liam’s foul-mouthed mother?


Aidan Greene was so engrossed in the pictures on the laptop screen that he didn’t even notice his partner come up behind him. “What are you looking at?” Liam asked, looking over his shoulder. Their small mixed-breed dog, Hayam, hopped up from her place beside Aidan’s foot and snuffled hello to her other daddy.
“Pictures of my cousin’s son’s bar mitzvah.” Aidan pointed at the screen. “That’s my Aunt Sophia, my cousin Ellen, and her husband Gary.”
“Facebook,” Liam said, noting the heading on the screen. “For people with too much time on their hands.”
It was an argument they had been having for a while. Since they had moved to Nice, where they had regular, fast Internet service, Aidan had begun connecting with old friends and family online, mostly through Facebook. After nearly two years away from the United States he was feeling a bit nostalgic for his old life.
“It’s not a waste of time,” Aidan protested. With his parents both dead, all he had left were a mix of aunts, uncles, and cousins. When he lived in Philadelphia for a dozen years after college, he saw family often. Reading their online profiles and seeing their pictures made him realize that it had been a long time since he’d seen any of them in the flesh.
It made him sad to keep missing family events—an uncle’s funeral, the birth and bris of a cousin’s son, and so many other small rituals.
“All that social media stuff is for losers,” Liam said.
“So your sister Jeanne is a loser?” Aidan asked. “She’s on Facebook. Did you know that her dog died last week? And your other sister, Franny? She’s been posting videos of your nephew’s softball games on YouTube. Not to mention Joey Sheridan—he’s got a Pinterest page with photos of his workouts.”
“Why are you looking at my family and friends?” Liam demanded. “What they do is none of your business.”
“Excuse me?” Aidan said. “Joey’s not my friend too? You ever asked him that?” Joey was an old friend of Liam’s, still a SEAL. He had visited them when they lived in Tunis and contrary to Liam’s expectations been fine to discover that his old buddy was romantically involved with another man. “And your family has nothing to do with me?”
“My family doesn’t even know you exist. And I’d like to keep it that way.”
Aidan stood up from the computer and confronted him. “Why? Do I embarrass you? Am I too gay?”
Hayam scurried toward the bedroom, her toenails clicking on the tile floor. “You are when you act like a drama queen,” Liam said. “My personal life is my own.”
Aidan shook his head. “You really are clueless, you know that? I am your personal life. I cook your meals and do your laundry and suck your dick. It doesn’t get more personal than that, pal.” Aidan pushed his palm against his partner’s chest. Liam was wearing a cotton T-shirt, and through the fabric Aidan could feel the warmth of his partner’s skin, the sinewy muscle beneath it.
Liam grabbed his wrist and turned it—enough to immobilize Aidan, not to hurt him. But Aidan knew that grip and how to rotate his arm so that his elbow bounced against Liam’s six-pack, startling him enough to release it.
Then they were wrestling in the middle of the living room, knocking aside chairs and the coffee table, each of them struggling to master the other. Aidan knew he was doomed to lose; Liam was so much bigger than he was, more muscular, with years of SEAL training. But for the past two years he had been exercising and learning the moves Liam used.
Anger was always a good workout tool for them. The adrenaline coursing through Aidan’s veins made him stronger and more agile. And he wasn’t above playing dirty, either. He reached up under Liam’s T-shirt, caught one of his partner’s nipple rings in his fingers, and twisted.
Liam yelped and pressed his stiff dick against Aidan’s thigh. Liam knew Aidan’s weakness—he was a horn dog, ready for sex after a single touch. And Liam was quite willing to exploit that. As Aidan wiggled to escape, Liam leaned down and kissed him hard, and Aidan gave up, melting into his touch.
With one meaty hand, Liam reached around and slapped Aidan’s butt, hard. “That’ll teach you,” he growled when he broke the kiss. “Don’t fuck around with me.”
“Seems like that’s exactly what we’re doing,” Aidan said, panting slightly. “Fucking around.” He reached down and stroked Liam’s dick through his silky gym shorts.
Liam released his grip on Aidan and stepped back. “No, just teaching you a lesson,” he said. “Now come on, we’ve got to get ready. We have a client today, remember?”
“Liam,” Aidan said, dragging the name out. “You’re not going to leave me here like this, are you?” He pointed down to where his dick pressed against his own shorts. He could feel a wet spot growing on his boxers.
“I’m going to take a shower,” Liam said. He pulled his T-shirt up over his head, exposing his bulging chest and improbably narrow waist. Then he dropped his shorts to the floor, leaving him clad only in his white jockstrap. His dick, stiff as well, pushed the pouch forward. “You can stay here. Or you can join me.”
He pushed the jockstrap down, and his dick pronged out. He stepped nimbly out of the waistband and raised it to twirl on one finger.
“I’m right behind you,” Aidan said.

About Neil S. Plakcy
Neil Plakcy is the author of the Have Body, Will Guard adventure romance series:  Three Wrong Turns in the Desert, Dancing with the Tide, Teach Me Tonight, Olives for the Stranger, Under the Waterfall and The Noblest Vengeance, published by Loose Id. 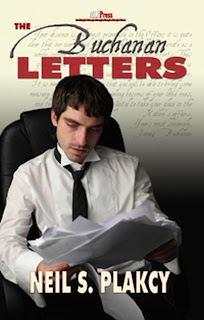 Jeff Berman, a Pennsylvania history professor, discovers correspondence between President James Buchanan and his male aide, which depicts their sexual and emotional relationship. With the help of handsome Pascal Montrouge, a disgraced New York Times reporter hungry to return to the big time, Jeff is swept away by publicity for what he has seen as an academic book, and his dreams of tenure and true love seem to be coming true. But when his life falls apart and his academic life is threatened, Jeff questions whether Pascal has only been using him—and how he can build a new life from the debris of his old one.
No comments: