Meet the Futuristic #MFRWauthor of The Turn of the Card @VickyBurkholder

Meet Vicky Burkholder.
Vicky Burkholder lives in a three-generation home with spouse, kids, grandkids and cats. Fortunately, two of the other adults are writers so she is surrounded by creativity in the midst of chaos. She has worked for magazines, newspapers, government organizations, e-publishers, and private clients. At various times in her life, she has been a teacher, a secretary, a short-order cook, a computer specialist, a DJ, and a librarian.

Who, if anyone, has influenced your writing? My dad was the first one to influence me. He taught me my love of the written word and that books can lead to whole new worlds.

How long does it take you to write a book? It really depends on the book - how long it's going to be, how much research is involved, and all that boring stuff. But generally, if I have all the backwork done, just a couple of months.

How do you come up with your ideas? From everywhere. From something on TV, a snippet in the news, something I see on the street... ideas are everywhere. You just have to be aware of them and run with them.

Tell us about your latest book.
The Turn of the Card was a ""what if"" sort of idea. What if... you got bet in a game of cards, and lost? What if... the man who bet you was your father? What if... he sold you off to pay off his debts? What if... and so on. And outer space? Whole new worlds to explore. It's a little science fiction, a little adventure, a little mystery, and a lot of romance. 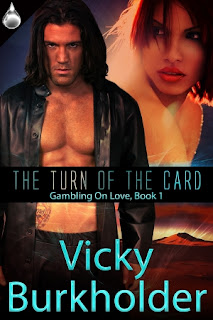 The Turn of the Card
Liquid Silver

Jessica Windemere loses her freedom when her father bets her in a poker game. But she isn’t willing to accept her fate without a fight. To have her revenge, she first must survive an unknown world while contracted as some stranger’s wife. She wants nothing more to do with men until a huge, dark god rides into her camp. Can she risk losing her new love on the turn of a card?

Kiernan Randall is on his way home from a trading mission. The group of abandoned women he finds were definitely not expected, especially their feisty red-haired leader. She is contracted to his enemy, but gives herself to him and firmly entwines his heart. Can he trust her enough to let her wager their future together on her skill with cards?


“Did you see how big they were?”
“I saw the big bulge in the leader’s pants.”
“I’d love to get some of that.”
“Me too.”
Jess strode into the sleeping area and shut the door. Her body temperature rose from warm to hot as she remembered the way his eyes had traveled over her. Her nipples tingled and tightened into hard nubs. Lower down, the heat built in intensity and she fought to control her libido. “He’s a man. Nothing more.”
But oh, what a man.
She went into the bathing room and ran water over her head, attempting to cool her overheated body.
“Jess?” Cammy called. “The food is ready and the men are here.”
“Fine. I’ll be right out.” Jess leaned against the sink and stared at her reflection in the grainy mirror. “Just a man. Nothing more.”
She stopped at her bunk and pulled her PDA out of her bag so he could see the contract. If these men weren’t their mates, then who were they? She felt for the knife in her pocket. No matter who they were, she wouldn’t take any chances.
She went out to find the men sitting at the long table in the center of the room. The women stood around them, glaring at each other.
“What’s wrong now?” Jess asked.
Cammy came to her. “They can’t decide who gets to sit with the men and who has to sit at the other tables.”
Jess snorted. “Oh for star’s sake.” She went back to her room and retrieved the deck of cards. Maybe her father had been good for something after all. He’d taught her how to handle cards well over the years. She returned to the group, shuffling the deck as she went.
“Everybody draws a card. High cards sit at the main table. Low cards sit elsewhere. In the case of a draw, hearts are high, followed by spades, diamonds, clubs.” She spread the deck face down on the table. “Don’t show your card until all have drawn. Cam, you start.”
“You will not draw,” the leader of the men said to Jess. “You sit by me, or we leave.”

What can we expect from you in the future? More futuristics - this one is just the first of a series (but they're all stand alone books so no cliffhanger endings!) and more paranormals and shapeshifters. Why stick with the plain when you can create new life and new civilizations? :)

Do you have a favorite author? Too many to list, but some of my favorites include Anne McCaffrey, Neil Gaiman, Misty Simon, Laura Bradford... and that's just the tip of the iceberg.


TALK TO Vicky...
Who are your favorite authors?
No comments: