#Thursday13 Sentences from #MFRWauthor @DevBentham DRIVING INTO THE SUN 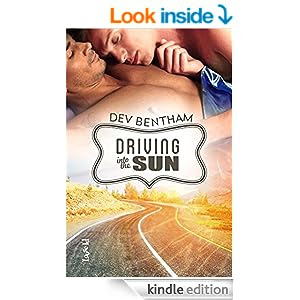 Bad choices. We all make them, some more than others. Dusty’s choices have left him unemployed,
broke and practically homeless. Despite the major issues he has with his family, his only rational choice is to sell everything and move into his parents’ basement. At thirty. Looking for a ride west, he answers a phone ad. The voice at the other end of the line flows like dark, rich honey. Finally something to look forward to—listening to Joe’s voice all the way from Illinois to Idaho.

"" Driving into the Sun is a book about leaving angst and risk management behind while accepting the possibility that there is something better that you didn't even know was out there. A great book, beautifully written, character driven and highly recommended."" - USA Today

""A richly developed and believable romance that resonates with strong emotion, Driving into the Sun is a superb novel that is quite captivating. Dev Bentham brings together two very complex and damaged characters who find love despite their insecurities and rather messy lives. The close confines of the car and the stops along the way provide an intimate setting for Dusty and Joe to divulge their secrets and explore their attraction. The sex scenes between them are exquisitely detailed and are a perfect blend of sweet and sexy.""
Book Reviews and More by Kathy
http://www.bookreviewsandmorebykathy.com/category/driving-into-the-sun/

13 Sentences from DRIVING INTO THE SUN...
When Joe finished with the hand, he put his fingers under Dusty’s chin and tipped his face toward the light. His touch was gentle, like a lover right before a first kiss. Dusty’s lips opened as he stared up into Joe’s dark brown eyes. Joe’s gaze flicked to Dusty’s mouth, then away. He wet some gauze and began dabbing at Dusty’s cheek. Dusty had forgotten about scrape on his face. Now it stung. So much for the moment before a kiss. He bit the inside of his lip to keep from pulling away.

Dusty rolled his eyes. Handsome was about the last thing he’d call himself tonight. Still, he found himself smiling at the thought.

ABOUT Dev Bentham
Dev writes soulful m/m romance. Her characters are flawed and damaged adult men who may not even know what they are missing, but whose lives are transformed by true love.