Myth and Magic collide on #Thursday13 with #MFRWauthor @MaeClair

MFRW Author Mae Clair hosts Thursday13 today. She tells us why she likes old houses and shares her release that has a close connection with the oncoming Halloween.


Mae Clair opened a Pandora’s Box of characters when she was a child and never looked back. Her father, an artist who tinkered with writing, encouraged her to create make-believe worlds by spinning tales of far-off places on summer nights beneath the stars.

Mae loves creating character-driven fiction in settings that vary from contemporary to mythical. Wherever her pen takes her, she flavors her stories with conflict, romance and elements of mystery. Married to her high school sweetheart, she lives in Pennsylvania and is passionate about writing, old photographs, a good Maine lobster tail and cats.
Myth and Magic
Genre Romantic Suspense
Publisher  Kensington Publishing/Lyrical Press imprint 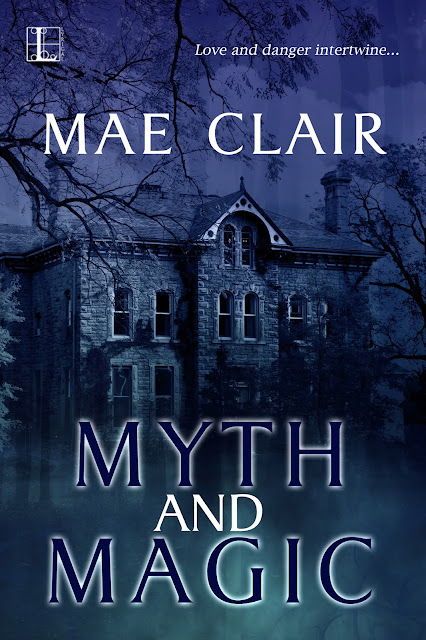 Veronica Kent fell in love with Caith Breckwood when they were children. As a teenager, she was certain he was the man she was destined to marry. But a traumatic event from Caith's past led him to fear a future together. He left Veronica, hoping to save her from a terrible fate. Twelve years later, Caith, now a P.I., is hired to investigate bizarre incidents at the secluded retreat Veronica manages. Returning to his hometown, Caith is forced to face his nightmares—and his feelings for the woman he’s always loved.

THEN ONE DAY THE MONSTERS BECAME REAL.

After the callous way Caith broke her heart, Veronica isn’t thrilled to see him again. But strange occurrences have taken a dangerous toll on business at Stone Willow Lodge. Forced to work together, Veronica discovers it isn’t ghostly apparitions that frighten her, but her passion for a man she has never forgotten. Or forgiven. Can two people with a tarnished past unearth a magical future?
Buy links:  Amazon   Kensingtonbooks  Barnesandnoble

IMPORTANT
Lyrical  Press are going to be discounting MYTH AND MAGIC to $.99 in the month of October through 11/4/2015

1. They have character and are usually enhanced by yesteryear touches like imposing staircases, “keeping cupboards,” massive hearths, window seats, and wide plank wooden floors (to name a few).

2. Old houses evoke a sense of history and the whimsy of days gone by.

3. Many come with legends attached—perfect for sleuthing into shadowy occurrences that still haunt the present.

4. They’re an ideal setting for mysteries with their creaking floorboards, winding staircases, and towering windows.

5. As a child, I lived in an “old” house for a short time and have fond memories of exploring its many nooks and crannies.

6. When writing a novel, it’s easy to tuck a secret passage into an old home for the hero or heroine to find.

7. Many times old homes are nestled in secluded settings, adding to their aura of mystery.

8. Written into a novel, and old home can easily become a character itself, embellished with personality.

9. Old homes, rumors of hauntings, and Halloween naturally go together.

10. I work in real estate and have personally visited many old homes, some dating back to the 1700s. I’m always transported to another time whenever I step inside an older property, wondering about the people who lived there and the events that took place.

11. Snap a photo in an old home and you may discover “orbs” floating in the photograph.  Spooky!

12. If old houses could speak, think of the tales they could tell!

13. An old home, complete with an infamous legend in it’s past, became the perfect setting for my Halloween-themed, romantic suspense novel, MYTH AND MAGIC.