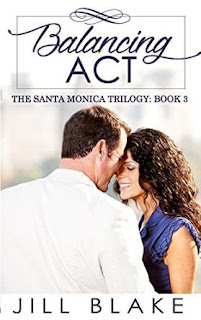 When Angie goes head to head against her old nemesis Zach, ""backroom negotiation"" takes on a whole new meaning. As lawyers on opposite sides of a case, they've got plenty to argue about. She's an environmentalist. He's in-house counsel for a land developer.

But handling difficult clients, interfering family and friends, and courtroom battles proves easier than facing a growing mutual attraction that threatens to spin out of control. While Angie wants to believe there's more to life than legal briefs, she's been burned before. Can she learn to trust Zach, or will complications of his playboy past derail any chance of a happily-ever-after?

Please note: Though this is the third book in the Santa Monica Trilogy, it can be read as a stand-alone novel.

REVIEWS
"Crisply written second-chance romance about two lawyers on opposing sides of a lawsuit. We’ve met Angie before in the first two books of this series, which were about her older siblings. In Balancing Act, Angie plays the starring role. She’s funny and smart, and doesn’t take any s*** from the hero. Zach is your usual man-whore alpha type who’s about to fall and fall hard. What saves him from being a cliché is that he’s smart and has a good work ethic, and is conscientious when it comes to family... He also does some pretty sweet things along the way that show how he really feels about Angie, even before either one of them admits to being in a ""relationship""."

"One of the things I really like about Jill Blake’s books is that she builds a very realistic world and populates it with interesting quirky people. We see recurring bit players here, like Angie’s siblings and her ex-boyfriend Quinn. (I hope Quinn gets his own story!) There are also some not-so-nice characters like Zach’s squash buddy, who’s a real class-A jerk but who serves the purpose of filling both Zach and the reader in on some of the backstory."

"The pace moves quickly, with snappy dialogue and great chemistry between Zach and Angie. Overall, I really enjoyed this book."

ABOUT Jill Blake
Jill Blake loves chocolate, leisurely walks where she doesn’t break a sweat, and books with a guaranteed happy ending. A native of Philadelphia, Jill now lives in southern California with her husband and three children. During the day, she works as a physician in a busy medical practice. At night, she pens steamy romances.