MFRW Author E. L. Esch shares her 13 Favorite Books on Thursday13.
I do not believe there is a linear way to write a romance, or any genre for that matter. I like books that make me think, the ones that make me work to understand the characters and what they go through, because "you never really understand a person until you consider things from his point of view - until you climb into his skin and walk around in it." :)


13 Favorite Books
Lovers, Dreamers, and Me
Diary of a Seducer
Skin Hunger
Pride of Baghdad
The Less than Epic Adventures of TJ and Amal
Lovers and Souls
Player's Ruse
The Last Wish
Guardians of Ga'Hoole
The Name of the Wind
The Drowned Cities
Silverwing
No. 6 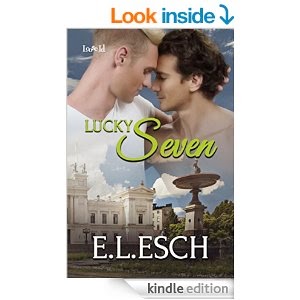 Dante Mathers, college student, fifth year, has a track record for being dishonest with himself, and is about to undergo the biggest, scariest change of his life.

Dante's forced himself to go out with girls in the past and he does it again when he's approached by the beautiful Serena one day on campus, desperate to prove to himself that he's ""normal."" But when he loses a drinking contest and is dared to go to the next campus GLBT meeting by his best friend, he’s not sure how to handle it. Sure he could blow it off and say he went, but something nagging at the back of his mind compels him to go anyway. After all, he’s had problems with intimacy in the past and his first crush was a boy in high school. But is he really forcing himself to go, or is he finally starting to be honest with himself? No need to over think this, Dante tells himself. It'll be get in, get out. No need to talk to anyone. Easy, right?

But then he meets Sven. Sexy, toned, wearing a leather jacket with spiked up bleach-blond hair, Sven's bad-boy flare sticks out on campus and catches Dante's eye. But there's more to Sven than his punkish looks, and Dante's about to find out all the sultry little details.

Are you up all night to get Lucky?
Newly released Romance Novel from Loose ID publishing--Lucky Seven.

REVIEW
""Oh yes...I really liked this...I love me some angst but not all the time...This one had a little angst but not too much and a lot of sweetness which was just right....I'm off to read Seeing Red....""


“I’m Mandy, and I’m bi.”
“My name’s Cole, and I identify as gay.”
“Terry, and if you can’t tell I’m gay, you need your brain checked, okay?”
The room chuckled, and then everybody’s gaze fell on me. “Uh…” I coughed. My throat felt like it was filled with sand, and I practically had to spit out my next words, “I’m Dante.” That’s it, just Dante. Now move along…
Fortunately when he realized I wasn’t going to say any more, the man next to me piped up with his introduction.
I whistled a sigh of relief. When I got out of this frigging trust circle, I was going to wring Greg’s scrawny neck!
I felt like a huge asshole sitting in this circle of ten people in a secluded underground room of the student union. They were here because they wanted to share with other people like them, to hang out and not be judged. Well, I wasn’t judging by any means, but the only reason I’d found my way to this LGBTQ meeting was because I’d lost a bet and my friend was still immature enough to find this kind of thing amusing.
The guy next to me nudged me in the shoulder, and I nearly flew ten feet out of my chair. I looked around the room. Introductions seemed to be over, and now everyone was just talking.
“You’re a fourth year, right?” he asked. His voice was smooth and rich. It reminded me of syrup, or tree sap.
“Fifth.” I swallowed. “I’m only finishing up electives this semester. I already have a job in my field.”
“Ah, must be nice.” He threw back his head over the edge of his chair and sighed. “In this little town it’s hard to find an internship close to home. I’ve been going through hell trying.” He grinned. “What’d you study?”
“Physical therapy.”
“Ah, that explains it. There are so many old folks and people who work with their backs around here. You’ll be in business for a long while yet. Or did you have plans to leave town?”
Part of me wondered if this was the kind of small talk I’d thought about making with that girl before. This guy was a hell of a lot better at it than I would’ve been. But whatever his motives, I didn’t mind. Greg was the only close friend I had on campus, and he hated talking about school life and work. The change of topic from girls and clubbing was refreshing.
“Nah, not leaving.” I shook my head. “Born and raised here in the country and no plan on leaving. I stick to my roots.”
He nodded. “I feel the same.” He held out his hand to me. “James.”
“Dante.” I took his hand warmly.
“So…” James leaned back in his chair and gestured at the whole of the room. “I haven’t seen you at one of these before.”
“Um…”
“Hey, it’s cool if you don’t wanna talk about it. Just making an observation. This place is so no pressure.”
It certainly didn’t feel like no pressure to me, but maybe it was the overwhelming guilt that made my stomach feel like it was tangled in knots. I wasn’t going to lie—I’d been curious in the past, but nothing ever came of it. Then again I’d never had a girlfriend either, which was why Greg had thought this would be so hilarious. I found men and women attractive in their own way, but that hardly made me gay or bisexual. Damn, if Greg knew how much stress this was really causing me inside, he’d probably look at me like I’d grown another head.
“Terry over there…” James set a hand on my shoulder and pointed to the guy who’d introduced himself earlier. “Biggest flamer in the whole damn school, and proud of it. You’ll see him at every drag show, and he’ll probably win. Sets the rest of the competition on edge, I tell ya.” He chuckled and pointed to another guy sitting three seats to my left. “The guy with the lumberjack beard is Carl. He’s quiet, not too wild. You two would probably get along.”
“Why are you telling me all this?”
James laughed. “Because you’re new, and I can tell you’re the shy type. Just put yourself out there. Nobody here bites…” He winked. “Often. Ah, I just noticed Seven is missing. Bummer. Not surprised, though. He’s a shy guy too. He’d be the perfect one for you to talk to. Better than me.”
“Seven?” What kind of a name was that?