A recluse vampire hotelier meets his match with a sexy reporter.

Reporter Ashlyn Douglas always gets what she wants. Her target—an interview with the elusive Rayven brother Cyrus, and to get the goods on the notoriously erotic-themed hotel that only a chosen few are able to visit. Ashlyn won’t admit to anyone the instant connection she feels towards Cyrus during her research on him and his twin brother, Coye. She has no intention of starting an affair. She plans to stick to the business at hand and get the truth behind the history of Rayven clan. But is Ashlyn ready for what Cyrus requests of her in return?

Cyrus Rayven isn’t a man of many words. His need for communication with the outside world left him the moment his mate, Jordana, died years ago. Though he has his choice of lovers, no woman has moved him since. That is until Ashley’s shapely curves and wicked tongue make everything within his cold vampire heart run scalding hot. He’ll grant the exclusive interview she seeks, but not before she spends five nights in his bed. Will Cyrus accept the newfound love between them? 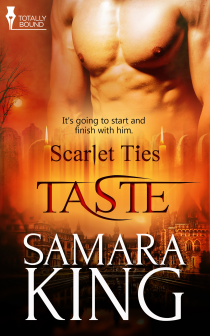 fantasies. They offered their services to an exclusive few, and the amenities afforded to those lucky enough to be chosen would keep the brothers in business for a long time to come. All clients were required to sign a waiver that forbade them to talk about their encounters with members of the media, and, as an extra precaution, patrons were driven to the facility blindfolded. So far, they had managed to avoid any major lawsuits or television coverage, not that the press and several magazines hadn’t tried every game in the book to gain access to the infamous Rayven brothers. If his brother, Coye, would be more discreet about his own affairs, their chances of keeping their secrets hidden would be even greater.
Cyrus scowled as he thought of his brother. Coye was never denied an opportunity to indulge. Sleeping with the mayor’s daughter had almost cost them their business a year ago. His sibling’s lack of restraint was merely one difference between them. Coye believed in utilizing his heritage as a Deiwalker to the hilt, while Cyrus saw it as a handicap.

ABOUT Samara King
Samara is the author of eighteen multi-genre works within romance fiction in novel and novella lengths as well as poetry. Writing romance has been a part of Samara’s world since her days of sneaking to the back of the library in grade school with a love story in tow; soon after, she wrote her own.

She was a Poet of the Year nominee in 2011 by African Americans on the Move Book Club and is a current member of The Romance Writers of America, several sister RWA chapters, and Sisters In Crime. Samara has penned stories for Totally Bound, Cobblestone Press, Loose Id, sexy mobile reads for Ether Books, and also writes under her imprint, Blush Novellas.

Samara previously co-hosted SoundNOff, a poetic format for poets and spoken word artists and hosted InCharacterN10, a former showcase for authors on Blogtalkradio.com/samaraking. Samara’s first poetry collection, The Ebony Kryptonite, was well received and was followed with Stripped Barefoot, a sultry mix of poetry and spoken word, which went on to reach #20 in Chicago’s Top 40 on Reverbnation in September 2013. Her next poetic endeavor, The Naked The Bare is slotted for 2015. To find out more about Samara’s poetry visit: http://reverbnation.com/samaraking or listeners may also find her on Spotify.

Currently, Samara is hard at work on her next romance series.
No comments: