MEET MFRW Author Thea Dawson
Thea Dawson has lived in Rome, Tokyo and London and spent much of her twenties traveling around some of the more exotic corners of the globe. She was finally talked into settling down when her boyfriend proposed to her in Angkor Wat, Cambodia.

Now she’s stateside again and embarking on a new career as a writer. Inspired by the places she's been and the people she met on the way, she plans to tell tales of romance and adventure.

How long does it take you to write a book?
FOREVER. Okay, more like four months with lots of on and off. I'm super slow.

I try to write a minimum of 1000 words a day, but don't always make it. My best writing time is in the morning from about 9-noon. It's when I'm thinking most clearly and, not coincidentally, when my kids are in school.

How do you come up with story ideas?
Like Monica, the heroine of Wanderlust, I lived abroad for much of my twenties. It was a very exciting, romantic time of my life and I have several stories planned around things that I experience while I was traveling.

What can we expect from you in the future?
I'm currently writing a kind of prequel to Wanderlust that tells the story of one Wanderlust's supporting characters and how he met his wife. It takes place as the two of them travel through Japan, initially not getting along well but (of course) eventually falling in love.

Tell us about your latest book.
It's a contemporary romance, but it has some chick lit elements as well. The heroine's relationship with her gay roommate is (I think) one of the best parts of the book, with snappy dialogue and a really solid friendship. And the story isn't just about whether the hero and heroine will end up together but where they're going with their careers and how they're going to make their jobs work with their relationship. 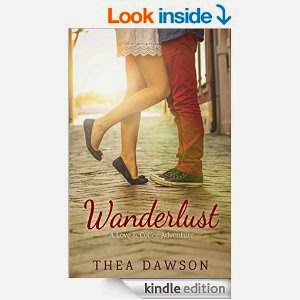 A writer and world traveler, Monica has everything she wants … except a free-spirited man to join her for life on the road. But when she bumps into Jason, who broke her heart in college, she lets him think she’s engaged. It wouldn’t take much to fall for him again—and that’s one road she doesn’t want to go down.

Jason dreams of the day he can quit his terrible job. Then he runs into Monica, the girl he never got over. Thinking she’s marrying a wealthy financier, he pretends he’s an ambitious career man in order to impress her.

Old feelings resurface, but Monica has trust issues and Jason doesn’t like risks. To top it off, Monica is leaving for Bangkok in two weeks—and she won’t be back soon. Time is running out for them to come to terms with the past and embrace their wanderlust.

What Reviewers Are Saying..
Thea Dawson created a beautiful story about first loves and heartbreaks, about chance meetings and misunderstandings, and about second chances and true love. Her words flowed from page to page making it near impossible to put down. The lighthearted read pulled at my heartstrings and kept me hoping for a happily ever after. —Summer's Book Blog

The cleverly woven humour, sadness, and hope laced throughout the book will simply wrap you up in the story. I pretty much finished it in one sitting. A real gem of a debut novel. —The British Bookworm


She picked up her cup and took a sip of her mocha. I was about to make a joke about how at least she was still left-handed—some things don’t change—and I glanced reflexively at her hand. The room seemed to give a weird lurch that made my stomach roll over, but I pulled myself together.
“Hey, congratulations! Who’s the lucky guy?” I said with as much enthusiasm as I could muster.
She looked at me blankly. I looked significantly at her left hand. She put the cup down and looked at the ring, as if she were surprised to see it.
It was beautiful. An enormous, square-cut emerald, surrounded by tiny diamonds. A knock-out of a ring that might have cost as much as I made in several months. A big, goofy smile spread over her face as she looked down at it. “Oh! This is—it’s kind of a long story, actually—”
The bells on the coffee shop door rang again, and an elegantly dressed woman who looked to be in her early forties walked in.
“Oh, there she is,” said Monica, waving to the woman. “I’m going to have to—”
“No worries, I’ll get out of your way,” I said, getting up. I took a deep breath. “Look, can I get your number? I don’t want to be inappropriate, I know you’re engaged and all, but I’d love to catch up with you properly sometime.”
She gave me a quick glance that conveyed her hesitation, but to my relief she nodded. “Yeah. Yes, I’d like that, too,” she said, fumbling in the pocket of her backpack again. “My business cards are in here somewhere—” She gave up, clearly in a hurry to get rid of me. “You know what, I’m on Facebook, Monica Prescott. I have a page called Adventuress Travels.”
“Adventuress Travels,” I repeated. “And it’s not like I’ve forgotten your name.” I grinned. “I’ll message you. Great to see you!” I leaned down and gave her a quick kiss on the cheek. I grabbed my coffee and smiled briefly at the elegant woman, who gave me an appraising look as I passed her.
“Who was that?” I heard the woman ask Monica as she sat down.
Monica’s reply made its way to me across the coffee shop as I made my way out the door and back into the bitter wind.
“No one. Just an old friend from college.”