A proper young lady should never attend a Masque...Aphrodite is no lady. 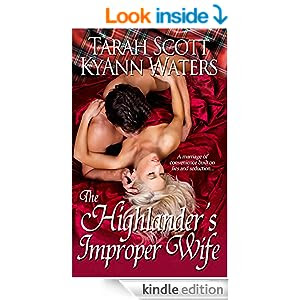 Taran Robertson, Viscount of Blackhall, makes no secret that he despises his obligation to marry the Sassenach heiress chosen for him by his father. As a last foray before his wedding, he attends a masque. However, the spirited vixen he meets and seduces has secrets...secrets that just may reveal he’s to have an improper wife.

A marriage of convenience built on lies and seduction...


“By God,” Caroline cursed ten minutes later.
Lord Forbes had not been boasting when he’d said his garden maze was unmatched in all of northern England. She blew out a frustrated breath. Of all the nights to become lost in one of the damned labyrinths. She turned down another bend and a white stone statue became visible ahead on the left. Caroline groaned. Already, she’d seen half a dozen replicas of Greek and Roman goddesses. This statue, she realized upon approach, was a large cherubim. The half-moon peeked through a hole in the veil of clouds, illuminating an alcove just ahead.
“Thank God.”
Caroline hurried forward. As expected, a stone bench lay nestled between the bushes. She hiked up her skirt and stepped onto the bench. Wind rustled across the hedge tops, setting her nerves more on edge. She scanned the acres of perfectly manicured shrubs that cut and curved in all directions.
“Bloody hell,” she cursed.
In the distance, the rear of the maze gave way to trees that stretched heavenward, but she stood no chance of navigating through the twists and turns that led to them. She faced the mansion and studied the path leading back in that direction.
“Left, right, second right, third—no—second left,” she said, while reciting a silent vow never to have a stupid maze on any of her properties.
Caroline turned to jump from the bench and shrieked. A masked, kilted god stood nearly eye-to-eye with her. She stumbled back. He seized her waist and yanked her forward. She instinctively threw her arms around his neck to keep from falling and her cheek met the warm, damp flesh of his shoulder. Her heart raced at a gallop.
“Careful, my lady.” The deep, cultured English accent didn’t quite disguise the hint of Scottish burr.
Gooseflesh chilled her arms. Yet, her body warmed. Her nipples hardened to erect peaks against the thin fabric of her costume.
“My lady,” he prodded.
Fear that he would feel the heat of her arousal immobilized her.
“I can stand here all night, if it pleases you,” he murmured.
The erotic vision of him doing just that while she rubbed her nipples against his hard body snapped her head up. Dark eyes indistinguishable from the shadow stared at her through a black eye mask.
A flurry of butterflies swirled in her tummy. “I am lost.” She cursed the breathless note in her voice.
“Nay, I found you.” He shifted. A dusting of hair at the nape of his neck tickled her fingertips. He slowly slid her body against his as he lowered her to the ground.
The scent of leather and cloves clung to him. She inhaled, heart fluttering, then tilted her head up. “You have my gratitude, sir. I would be even more grateful if you could direct me out of this…this…labyrinth.”
“Even more grateful?” he repeated.