Does time really heal all wounds? 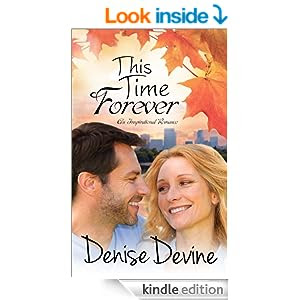 Libby Cunningham has finally found the daughter her father forced her to give up for adoption nearly sixteen years ago. She has never forgiven herself and now desperately wants to make it up to Amber for the years they’ve lost. However, she has also learned that Cash MacKenzie, Amber’s father, has custody. Libby has never forgotten that Cash broke her teenage heart and deserted her when she needed him the most. Now he holds the key to her future happiness. Can she overcome her memories of the past or will her feelings jeopardize the present?

From Cash’s viewpoint, Libby couldn't have picked a worse time to intrude upon their lives. Amber’s rebellious attitude reminds him of Libby at that age. He doesn’t need interference from the woman who abandoned her own child and realizes he’s never forgiven her. What guarantee does he have that Libby won’t walk away from Amber a second time? Libby’s feelings for Amber may be genuine, but he will never allow her to hurt Amber—or him—ever again.

ExcerptLibby Cunningham had risked heartbreak before, but not like this. Never had she come so close to finding the child her father forced her to give up for adoption almost sixteen years ago. Years spent praying and trusting God for a breakthrough had led to disappointment again and again—but not tonight. This time her heart possessed an unexplainable peace, giving her renewed hope. Had God finally answered her plea?
Then she saw the girl.
“That can’t be my daughter,” Libby murmured as she watched a teenager ascend the stairs of a crowded bleacher at the River’s Edge High football game. “That young lady has someone else’s genes.”
Medley Grant reached over and squeezed her hand. “Lib, Lib, you’ve got to keep an open mind. I warned you that Amber might not be what you expected.”
The crowd roared and Amber MacKenzie pivoted, gazing down at the play in progress. Towering floodlights cast a silvery sheen upon the tall, slender girl wearing a neon pink sweater and hip-hugging jeans.
Waist-length hair hugged her shoulders and arms like a luxurious black shawl.
Libby studied every detail of the girl she could glean from a distance, desperate to find some connection. “I expected to see something of myself in her,” she confessed. Instead she’d come to a dead end, once again facing the reality that the odds of finding her daughter didn’t lean in her favor. “She doesn’t resemble me at all.”
“Yes, she does!” Medley leaned back and stared past Libby’s right shoulder, perusing Amber with a smile of approval. “She reminds me precisely of you at that age.”
On the field, River’s Edge cheerleaders led the raucous crowd into a frenzy of school spirit. Clad in maroon skirts and gold sweaters, they swung matching pom-poms and kicked their legs high. “Push ‘em back, push ‘em back, w-a-y-y-y back! G-o-o-o Otters!” Behind them, both teams joined arms in their respective huddles, discussing their next plays.
Libby ignored the game and the crush of boisterous spectators seated elbow-to-elbow on the hard, metal bleachers. The crisp, September evening provided perfect weather for football, but she and her cousin never intended to spend their time watching the game. They came here on a mission—to spy on Amber MacKenzie. Ever since the girl walked into Medley’s salon last week to get a trim, Medley had pressured Libby to attend this event and observe Amber for herself.
Libby twisted at the waist, her gaze sliding from Amber back to her cousin. “What do you see that I don’t? I’m blonde and fair. She’s so...totally like her father.”
Medley paused, holding a couple kernels of popcorn to her burgundy-tinted lips. “She inherited Cash MacKenzie’s looks, but I see other ways you two are exactly alike. That day she came into the salon, I noticed aspects about her that reminded me of you. She has your tall, slender frame. You both frown the same way when you’re reading. Oh, and another thing,” Medley paused to sip her soda, “Amber’s voice...”
Medley’s fine, penciled brows arched. “She sounds exactly like you.”
“I wish I knew for sure.” Libby sighed and looked away, not wanting Medley to see her doubt. A couple of similar attributes didn’t prove a thing. “If she’s almost sixteen she could be mine. If she’s younger, then she’s his daughter by someone else.”
Even though it happened long ago, the thought of Cash MacKenzie marrying so soon after he’d severed all ties with her still touched a nerve. How could he have forgotten her so easily? Had he been seeing someone else all along? That could explain why he’d turned his back on her when she needed him the most...
She stared hard at Amber, wishing with all her heart this girl could be the one. For a moment, she dared to entertain the possibility.
“All these years I’ve believed total strangers adopted my baby,” she declared. “If, in fact, Amber is my child and her own father raised her...” Libby’s throat tightened as a simple question hovered in her mind. How did Cash end up with Amber? The only answer possible proved difficult to bear. The people closest to her, the ones she’d trusted, had deceived her.


About Denise Devine
Denise has had a passion for books since the second grade when she discovered Little House on the Prairie by Laura Ingalls Wilder. She wrote her first book, a mystery, at age thirteen and has been writing ever since. She's been a member of Romance Writers of America (RWA) since 1991 and has won or placed in numerous writing contests. In 2008, her contemporary inspirational romance, This Time Forever, was a finalist in RWA’s Golden Heart contest for unpublished writers.

Denise lives on six wooded acres in East Bethel, Minnesota with her husband, Steve and her three problem (feline) children, Mocha, Lambchop and Tigger. She loves to read, write, study and travel.