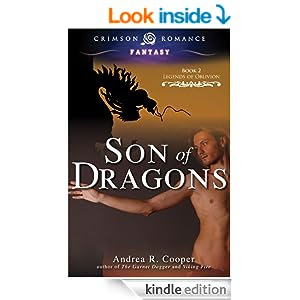 Shunned by her own people and weary-hearted from centuries of lost loves, Elvin warrior Mirhana scours
the land to silence the undead. Her heart has turned as cold as the sword she wields, until a prince seeks her aid.

Never has Prince Landon met a woman like Mirhana. Both beautiful and deadly, she haunts his dreams. The battle at hand becomes more enchanting than fighting to remain true to his unseen betrothed.

In a time of false peace, the dead rise as soldiers for the Warloc's scheme. For thousands of years he has stood ready for the final battle. Though the witch and her cursed Elvin have destroyed his physical body, now with his protégé, he has honed a new way to wage war.

When a traitor emerges, new alliances among the heroes are tested and the only remaining hope is to follow the prophecy and find the . . . Son of Dragons.

WHAT REVIEWERS SAY...
"What a novel!  I felt like I’d walked into a fantasy right from the first page.  Cooper creates this vivid world in a seamlessly captivating manner.  Her descriptions paint it in your mind’s eye.  As a reader you can feel the shifting of dark and light in the author’s writing.  It heightens the sense of magic and surrealism.." - Pure Jonel

"Son of Dragons is a superbly written, fast-paced fantasy adventure with lots of twists and turns.For fans of Tolkein and romance, Son of Dragons will not disappoint. The world is rich and vibrant,..." - Kary Rader


Clean from the bath, Landon let the air from the open window dry his hair. Dressed only in trousers, he leaned against the windowsill.
He thought he smelled the hint of roses and heat on the breeze. Movement from the street below caught his eye. He leaned out, squinting into the night.
Torches lined the cobbled street corners. A cloaked figure waited. Then the innkeeper rushed outside. His hands flew in gestures as the figure nodded.
Then he pointed to the window where Landon watched. At the same instant, the cloaked figure followed his finger’s path to Landon. Green eyes that seemed to glow met his.
Landon jumped up and cursed when his head hit the bottom of the window. When he looked back, both figures were gone.
Thinking the innkeeper would send guards, he waited with his sword in hand and his stare riveted on the door. No one came. He must be getting paranoid, thinking there was a ghost or enemy around every corner. His eyelids grew heavy as he waited for a fight that failed to materialize. Finally, he rolled his shoulders back to ease out the tension.
Still, he couldn’t stop thinking about those piercing emerald eyes. They’d belonged to a woman; he could tell. There was intelligence and cunning in them. Her stare felt as though she saw through the façade he often wore as prince and to please others, and into his kajh.
A woman who was not afraid, but used to being feared. It unnerved him, yet excited him. His pulse quickened and his loins tightened at the thought of those eyes filled with passion for him.
Better get some sleep before the night was gone. Tomorrow, he’d tell Gillespie about what he saw. He doubted he could explain those captivating green eyes that continued to haunt him even now.

ABOUT Andrea R. Cooper
Since childhood, Andrea R. Cooper has created characters and stories. She believes in the power of love and magic. Her favorite genres to read and write are fantasy, paranormal and historical romance.