A Quick and Quirky Dozen with #MFRWauthor Diane Wickles @DDominikWickles

Welcome D. Dominik Wickles.
D. Dominik Wickles is the pseudonym for Romance author, Diane T. Wickles. Diane has always been overly curious and loves to try new things.She has explored many genres including horror, humor and mystery publishing several short pieces on various online magazines. Diane’s books always have a happy ending but the road to that point is rife with mystery and danger . She is a member of Pennwriters and is active in two local writing groups.At her home in northwestern Pennsylvania, she talks to her cat, reads 2-3 books at a time, constantly searches for new vegan recipes and creates her characters. In her spare time, she loves camping and building dollhouses.

DAY OR NIGHT?
I am definitely a day person since my mind gets pretty foggy if I stay up past 11 pm.

PEN & PAPER OR COMPUTER?
I write my first drafts with pen and paper then type it into my laptop to edit.

FRUIT OR CHOCOLATE?
I have a love/hate relationship with chocolate; I am too often tempted to eat it and it is so bad for me. Now, fruit, I love. I have fruit in my smoothie every morning.

COFFEE OR TEA?
I am definitely a tea drinker, herbal, green and white teas begin my day.

ROLLER COASTERS OR MERRY-Go-ROUNDS?
I've always loved Merry-Go-Rounds pretending I was a princess on my horse. I have learned as I grow older to leave the roller coasters to the younger crowd.

BATH OR SHOWER?
I love to soak in my claw foot tub and read. Talk about pampering yourself!

CITY OR COUNTRY?
Cities are great to visit but I prefer the quiet of the country to keep my sane.

SOFT OR HARD?
Soft or hard depends on what we are talking about...

EBOOK OR PAPERBACK?
I am old fashioned in my preference for paperback books to hold, smell and treasure.

CATS OR DOGS?
I relate closer to cats than dogs.

FAST OR SLOW?
Generally, I like a slow pace to relax and enjoy something.

Deshi Han, Hong Kong’s martial arts actor and director, thinks a serious relationship would hamper his career. Then on a charity trip to the Philippines, after a typhoon, he agrees to take a American woman with memory loss, back with him to recover.

Back in Hong Kong, Deshi reluctantly allows the young woman, whom he names Annie, to accompany him on the movie sets and his trips across China. Despite his attempts to remain aloof, a romance develops between them.

Meanwhile, Annie is troubled by nightmares, revealing a danger lurking from her past, and a member of Deshi’s crew is plotting to remove her from his life. Deshi is forced to change his work schedule often to protect Annie, confirming his belief about relationships and careers.

But when it looks like Deshi will lose Annie, and he risks all to save her, will it be too late?

Hong Kong Treasure, an international romance with mystery and intrigue.
Get your copy today! BUY LINK
REVIEW
"The level of sensuality is perfect: not overdone, just romantic and gently sensual. He is the sexy alpha male; she is a sweet and somewhat shy woman who is a bit in awe of this impressive star and dedicated philanthropist." - Julie, 5 stars


He followed the priest to a courtyard. A young woman sat beside a storm-crushed rose bed. Deshi guessed her to be American, in her early twenties. “Who she, Father?”
“No one knows, not even her.”
The supplies had gone so fast. They had only been to six of the eleven shelters and there were so many people still in need. “Maybe one more thing I can do today,” Deshi said with a sigh. “Father?”
The priest’s right hand clutched the large cross at his neck and he smiled. “Yes, my son?”
“I will take her.” 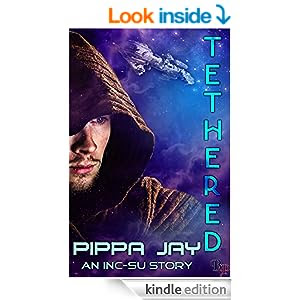 BLURB
For Tyree of the Su, being an assassin isn't simply something she was trained for. It's the sole reason for her existence. A genetically enhanced clone—one of many in Refuge—she's about to learn her secluded lifestyle, and that of all her kind, is under threat by a race capable of neutralizing their special talents to leave them defenseless.

For Zander D'joren, being a diplomat has not only cost him his appearance, but also the love of his life. Scarred, grieving, he must nonetheless continue in his role as co-delegate to the fearsome Tier-vane or risk a conflict that could only end one way.

Now both of them need to keep each other alive and maintain a perilous deception long enough to renegotiate the treaty with the Tier-vane, or throw their people into a war that could wipe out Terrans and Inc-Su alike. But there's more at stake than humanity, whether true or modified. Can the love growing between them save them both? Or merely hasten their destruction?" She can kill with a kiss. But can assassin Tyree also heal one man's grief, and bring peace to a galaxy threatened by war?

WHAT REVIEWERS SAY...
"The book is beautifully written, full of vibrant language and visuals befitting the science fiction genre. And the love story she weaves between Zander and Tyree adds to the overall plot rather than detracting..."
Cate Peace, Going from Nobody to Somebody

"I really enjoyed this sci-fi romance. Pippa Jay has an elaborate style that paints a vivid world around her characters. The setting is interesting with quite a bit working around the central struggle of the main characters. I felt the turmoil between the characters as I could relate to their struggles, even though they live in a fictional future."
Elle Clouse, Goodreads

EXCERPT
Tyree spun on her heels, her long hair lashing around her as she faced the council. ""You want me to be a what?""
Thirteen elderly Inc-Su met her scream of outrage with angry stares. The last syllable echoed around the chamber. If sound could penetrate metaglass, it would have scattered the saurian lowri gliding past the panoramic windows on membranous wings.
Tyree swore G'vorek, one of her former mentors, winked at her, and her irritation eased a fraction at his silent support. Some of the other council members shifted in their hover seats as she cast her gaze over them. Several scowled. Beyond the oval table and the council members, clouds drifted past the window obscuring the slender sky towers of Refuge, a serene background that conflicted with the turmoil suddenly seething in her chest.
""I didn't think the phrase 'co-delegate' would be considered such an offensive term even by you, Tyree,"" Great Mother M'roc said.
Tyree latched her attention onto the matriarch. Unlike the majority of the Inc-Su, M'roc had a generous, matronly figure and caramel-colored skin. Dark braids tinted with gray framed her broad face. There was a saying among the Inc-Su, twisted from the old Terran phrase—as solid as M'roc. Unbending, reliable, consistent, and strong. Good traits in a leader, but it meant once she'd made a decision, nothing could change her mind. If she'd chosen this role for Tyree...
""I'm an assassin, not a frigging diplomat,"" Tyree retorted, but the initial fire of her resistance had guttered. Arguing already felt like a lost cause, but she had to make the point.
Several members of the council tsked at her insolence. G'vorek smiled, deepening the vast collection of wrinkles on his thin, seamed face. Like the other ancients, the charcoal black of his skin had faded to gray, giving him a stone-like appearance.
""Your skills are many, and you are perfect for this role,"" M'roc continued.
""Why?""
""Perhaps you should explain the situation more thoroughly,"" G'vorek said, his voice like layers of slate sliding over one another.
M'roc clasped her gnarled hands and threw her co-councilor an exasperated glare before looking back at Tyree. ""I was about to. The Terrans are once more negotiating their centennial peace treaty with the Tier-vane.""
Tyree waved a hand, dismissing the news as unimportant.
""Perhaps you'd be less indifferent if I told you there have been three assassination attempts on the co-delegates? According to tradition, once the delegates on both sides have been chosen, no others may substitute. It would be taken as a sign of deception. An attempt at trickery.""
""I didn't know that,"" Tyree murmured, but she was more interested in the revelation about the assassination attempts. Whoever had committed those attacks couldn't have been Inc-Su. It would never have taken three tries, and all of them failures. If it had—and it would be a first in their history—was that why she was being assigned? Somehow three Inc-Su had failed, and now they were sending her?

ABOUT THE AUTHOR
After spending twelve years working as an Analytical Chemist in a Metals and Minerals laboratory, Pippa Jay is now a stay-at-home mum who writes scifi and the supernatural. Somewhere along the way a touch of romance crept into her work and refused to leave. In between torturing her plethora of characters, she spends the odd free moment playing guitar very badly, doing freestyle street dance, and studying the Dark Side of the Force. Although happily settled in historical Colchester in the UK with her husband of 21 years and three little monsters, she continues to roam the rest of the Universe in her head 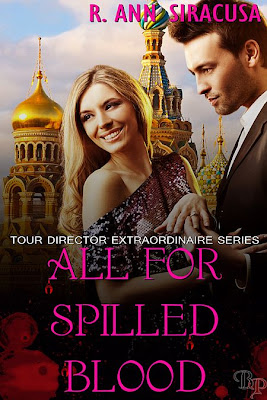 An international youth convention, art smugglers, and terrorists trying to recruit young computer geniuses and a national art treasure.
Harriet Ruby, tour director extraordinaire, and her fiancé and favorite spy, Will Talbot, travel to Russia undercover as tour directors for the US delegation to an international youth conference. Harriet tackles her first covert assignment to investigate smuggled artwork while Will's mission is to locate and destroy a group of terrorists recruiting young computer experts.
Their marriage plans hit a snag when Will locates a long-lost cousin with startling news about his heritage. When the artwork being smuggled has particular significance to one of the terrorist sympathizers, their missions entangle and begin to unravel, leaving Will at the mercy of terrorist kidnappers and Harriet holding the bag.
No comments:

Book Spotlight ~ All For A Dead Man's Leg 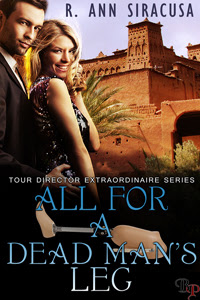 Tour director Harriet Ruby is a young, well balanced, smart, and hardworking over-achiever. So far her life has been good but predictable and ordinary. Her biggest problem is that she doesn’t have any real problems and is much too trusting.

Directing her first solo tour in Europe, she and her group get lost in the souk, the old walled marketplace, in Tangier. There, one of her tourists becomes ill and needs a doctor. Harriet can't find her way out. When a handsome and mysterious stranger, Will Talbot, pronounces the tourist dead and offers to help her smuggle the body out of Morocco, Harriet's once-predictable life turns upside down and will never be the same. Their fast-paced romantic romp through exotic foreign lands takes them in hot pursuit of murderers, smugglers, international terrorists, a dead man’s secret, and a healing, once-in-a-lifetime love.
No comments: