In the second grade, she knew she was destined to write when she got an A+ for her story about Dick, Jane, and Sally's ruined picnic. After obtaining her PhD from Indiana University, she joined the federal government and had the opportunity to work and live internationally for more than fifteen years. She draws upon these experiences to endow her characters with deep conflicts and emotions.

An Interview With Lizzie T. Leaf

Today we have the wonderful Lizzie T. Leaf with us. Let’s give her a warm MFRWA welcome! 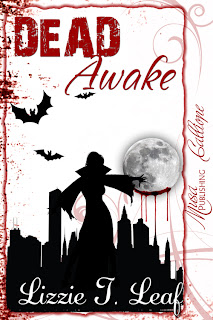 Tell us about your latest book, including its genre. Does it cross over to other genres? If so, what are they?

The DEAD series is in re-release through Musa Publishing and a new book in the series is scheduled to release in October, 2012.  The series is paranormal romance with humor and spice.

The seconded book in the Magical Love series at Passion in Print Press is in for edits, but don’t have a release date yet.  Also, possibly another DEAD in addition to the October release by the end of the year.

How do we find out about you and your books?

My website www.lizzietleaf.com will have all the books that are available, coming soon books and scheduled appearances.

Do your fans' comments and letters influence you in any way?

Fans turned the first DEAD book into a series.  I’d only planned to write the one, but kept getting asked “When is the next one going to be out?”

How much of your personality and life experiences are in your writing?

I’ve been told by some who know me well that my writing if me.  They think I’m a combination of snarky, fun and angst. If that’s a case, then I guess a bit of ‘me’ is in my writing.  And yes, I do draw on life experience, or at least the emotions, at times.  The saying of, be careful or you’ll end up in my book can come, into play especially with some of those from my past.

What do you do to relax and recharge your batteries?

I love to travel.  It’s fun to experience new cultures and meet new people.  When I really need downtime a cruise gives me some of both worlds.  Time spent relaxing in the cabin or by the pool when I’m in a quiet mood, or joining in the social activities when the mood strikes.  Plus, the ports of call gives the connection to the new cultures and people.

Do you feel humor is important in fiction and why?

If I don’t feel humor is important then I’m in trouble since most of my books contain humor.  I enjoy reading it too.  After a stressful day nothing is better than to laugh.  Laughter is a way to bring ‘me’ out of the dumps, either with a book that brings a smile, a TV show or a movie.  It’s amazing how much better a good belly laugh can make one feel!!!

Would you like to write a different genre than you do now, or sub-genre?

Yes, totally different.  In fact, I’m working on a Young Adult (love the angst) and a Women’s Fiction.  Both are on hold at the moment because of the two series I’m working on, but when I need a change of pace writing a little on one of them is the way I go.

Where can your readers find you?

Where’s your favorite place to hang out online?

Bio: Award winning author, Lizzie T. Leaf started life in Kansas, continued her growing in North Carolina, and currently shivers through the winters in Colorado.  She has numerous e-books in varying lengths and her first print book, Struck by Lightning, won dual 2007 Beacon awards, in addition to being a finalist in two other contests.

In addition, Making Christmas, a Christmas Historical novella set during the Civil War won Love Romances Café Best Historical for 2011 and is a finalist in the Aspen Gold for Best Novella.

Beyond Magic, the first book in the Magical Love series won the 2012 Award of Excellence Best Paranormal/Fantasy/Sy-Fi, as well as a finalist for Best Paranormal in the Aspen Gold.  Winners are announced in mid to late October.
Since discovering the fun of writing paranormal, she plays with creating vampires, faeries and other immortals. Her current focus is the DEAD series.  Musa Publishing has re-released the first four novellas in the series and DEAD Hot, a new novella, is scheduled to release in October.  Emerging Magic, the second novel in the Magical Love series will also release in late October or early November with Passion in Print Press.

When not creating mischief for paranormal beings, she can be found exploring the other genres she wants to write.  She also serves as the 2012 President for the Heart of Denver Romance Writers.

Lizzie loves to read, spend time with her family and travel with her best friend husband during her free time, on which most of friends ask…“what free time?”