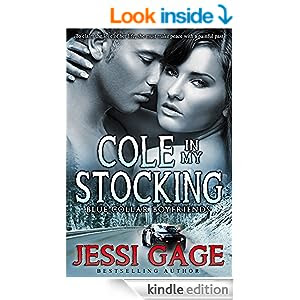 Romance.
Mandy never planned to return to Newburgh, NH, the hometown that unfairly branded her a slut, but when her father dies, she must spend Christmas settling his affairs. She hopes to get in and out of town without notice, but when she runs into a certain Oakley-wearing, Harley-riding cop, an old crush is revived and the rumor mill restarts with a vengeance.

Cole has always been attracted to Mandy, but he has never acted on it. Besides being years older than her, he was friends with her father. The rumors about her were bad enough without an inappropriate relationship adding fuel to the fire. But when Mandy comes home fully adult and more gorgeous than ever, he can’t keep his distance, especially when an old secret of her father’s puts her in danger. He’ll stop at nothing to protect her, but convincing her to stay will take a Christmas miracle.

Mandy’s father is dead. But his secrets live on, putting her in danger. It’s a good thing she has a Harley-riding cop to help her face down her father’s enemies. But facing down her troubled past, even with Cole by her side, will take a Christmas miracle.


He cupped her chin and made her look at him, even if they couldn’t see each other in the dark. “What did he do after?”
“What do you mean?”
“When you freaked out. What did your boyfriend do after that?”
Tension straightened her shoulders. “What any decent guy would do. We stopped. He stopped. He was a perfect gentleman.”
He scoffed.
“What? He was. I was a total spaz and he was cool about it.”
“He was cool about it?”
“What? What’s that superior tone for?” She was getting angry. He loved that about her. She’d stood up to Tooley a few days ago. She was standing up to him now. If she didn’t like something, she let you know about it. Now that was a characteristic he could believe she’d gotten from Gripper.
“You said you freaked like always when things get to a certain point, that you always blow it. You think you blew it with that guy because a single attempt at second base went poorly. I meant what happened afterwards? Was there a conversation? A second attempt after you had some time to process what happened? A third?”
“What guy would want to try again after something like that?”
“This guy would.”

ABOUT Jessi Gage
Jessi lives with her husband and children in the Seattle area. She’s a passionate reader of all genres of romance, especially anything involving the paranormal. Ghosts, demons, vampires, witches, weres, faeries...you name it, she’ll read it. As for writing, she's sticking to Highlanders and contemporaries with a paranormal twist (for now). The last time she imagined a world without romance novels, her husband found her crouched in the corner, rocking.

A woman in a coma learns how to forgive as she visits the dreams of the man who caused her near-fatal accident. 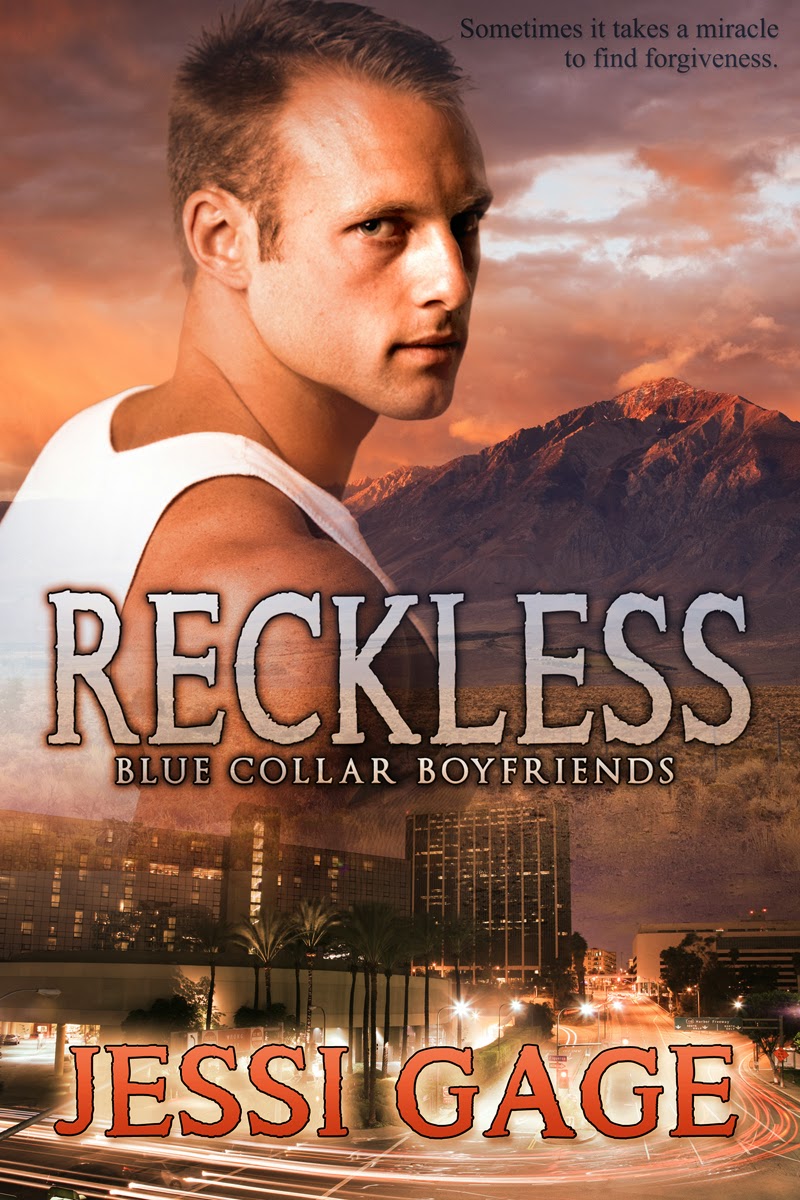 an accident. His truck escapes unscathed, but he can’t say the same for his conscience. Visions of the wreck haunt his dreams, but they’re always followed by the sweet caresses and soothing words of a beautiful woman who calls to everything male in him.

Cami assumes she is dead. With no memory of her past, all she knows is endless fog and the occasional visit to a darkened bedroom where she comforts a man battling nightmares. When she wakes in a hospital bed and regains her memory, she assumes the ruggedly handsome Derek was no more than a figment of her concussed mind.

As Cami recovers, she learns that Derek is not only real but also the driver charged with causing her accident. She should be furious with him, but their inexplicable nights together showed her a tender side beneath his rough exterior. Will she let one reckless mistake drive them apart, or will forgiveness have the right of way?
Buy Links: Amazon | Barnes & Noble

What Reviewers Are Saying
“This story was magical in every way, and I was unable to put it down. I consumed it in one evening, and I found myself excitedly telling friends and family that there wasn’t one emotion that this author wasn’t able to engage me in as a reader.”-Angela Rose, Satin Sheets Romance Reviews

About Jessi Gage
Jessi lives with her husband and children in the Seattle area. She’s a passionate reader of all genres of romance, especially anything involving the paranormal. Ghosts, demons, vampires, witches, weres, faeries...you name it, she’ll read it. As for writing, she's sticking to Highlanders and contemporaries with a paranormal twist (for now). The last time she imagined a world without romance novels, her husband found her crouched in the corner, rocking. 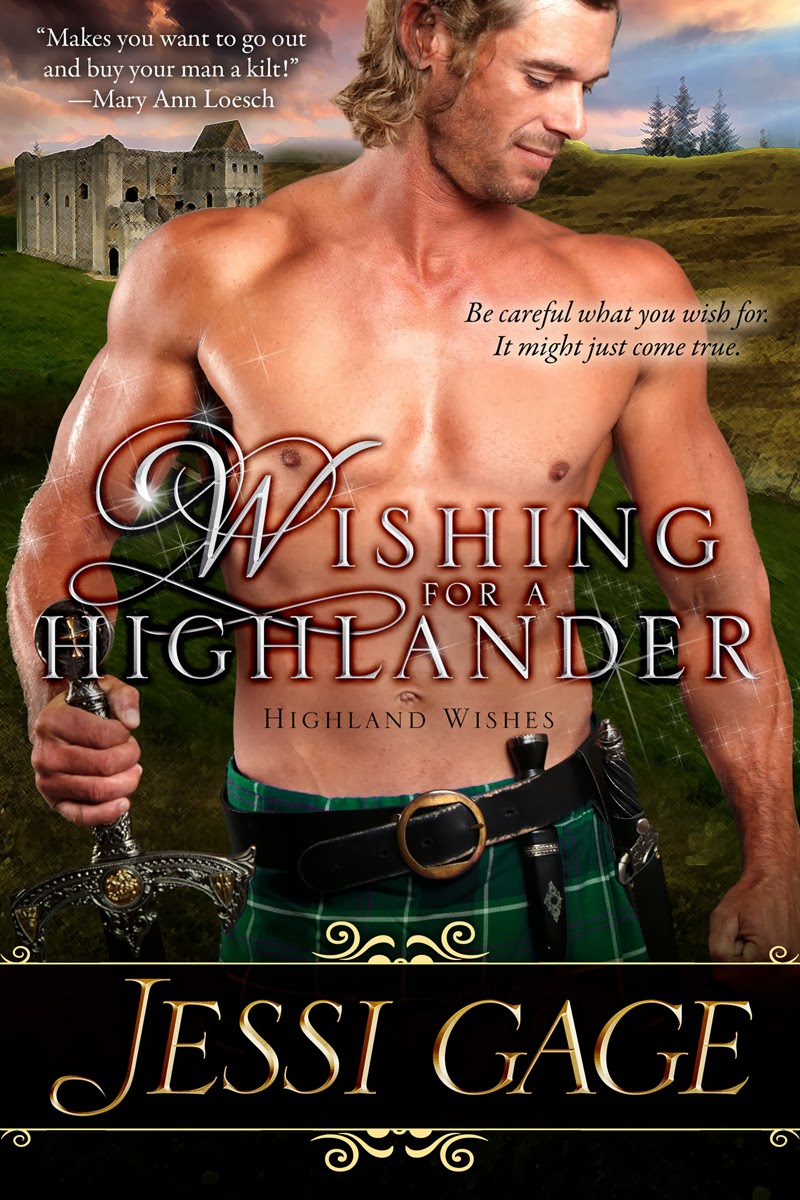 Single-and-pregnant museum worker Melanie voices an idle wish while examining a Scottish artifact, that a Highland warrior would sweep her off her feet and help her forget her cheating ex. The last thing she expects is for her wish to be granted. Magically transported to the middle of a clan skirmish in the sixteenth-century Highlands, she comes face to face with her kilted fantasy man.

Tall, handsome, and heir to his uncle’s lairdship, Darcy Keith should be the most eligible bachelor in Ackergill. Instead, thanks to a prank played on him in his teenage years, he is known for being too large under his kilt to ever make a proper husband. “Big Darcy” runs his deceased father’s windmills and lives alone at his family manor, believing he will never marry.

But a strangely dressed woman he rescues from a clan skirmish makes him long for more. When the woman’s claims of coming to Ackergill by magic reach the laird’s ears, she is accused of witchcraft. Darcy determines to protect her any way he can, even if it means binding her to him forever.
Buy Links
Amazon | Barnes & Noble
EXCERPT

Size might have its advantages when it came to fighting, but those few boons didn’t compensate for the problems it caused. Being the biggest and the strongest had gotten him into far more trouble than it had gotten him out of. Swallowing his regret for how careless he’d been with her, he sought to determine whom she belonged to, whom, saints forbid, he might owe.

“Whose wife are ye, then? Not a Gunn’s or I wouldna have had to rescue you from one.”
“I’m not married,” the lass said. “And thank you for the rescuing, by the way. I can’t believe I dropped the dirk. Stupid.” She shook her head.

His heart warmed at her thanks. He didn’t hear many kind words from the lasses and would take what he could get, even from a dishonored woman who had caught a bairn out wedlock. Oddly, he didn’t think poorly of her. Whether it was her vexed brow, her guileless, soft mouth, or her vulnerable size, he had not the heart to condemn her.

He didn’t even mind so much that she found him distasteful for being overlarge, although talking with her now, she didn’t seem overly upset to be in his arms. He endeavored to keep her talking, keep her distracted from her disgust.

“You never answered my first question,” he said. “Who are you? And where are you from if ye’re no’ English?”

“Ugh. I don’t know. Is there an answer that won’t get me burned at the stake or locked up in a ward for the hopelessly insane?”

Like most things out of her mouth, that had been a peculiar answer. “You could try the truth,” he offered, slowing his pace since he heard Archie’s voice not far off.

“No,” she said flatly. “I couldn’t. At least not the whole truth. How about we just go with my name, Melanie, and with the honest fact that I’m a long way from home and have no idea how to get back.” Her green eyes pierced his. “I’m afraid you might be stuck with me, Darcy Keith.”

About The Author
Jessi lives with her husband and children in the Seattle area. She’s a passionate reader of all genres of romance, especially anything involving the paranormal. Ghosts, demons, vampires, witches, weres, faeries…you name it, she’ll read it. As for writing, she’s sticking to Highlanders and contemporaries with a paranormal twist (for now).

Jessi brings her love of research to her worlds and characters. She believes good always triumphs over evil, but in the most compelling stories, evil gives good one heck of a run for its money. The last time she imagined a world without romance novels, her husband found her crouched in the corner, rocking.

Jessi strongly believes in embracing community. She loves her neighborhood and loves getting together with

her writing friends, mom friends, church friends, and, well, anyone who shares an interest. She can often be found having coffee at one of the many neighborhood coffee spots she frequents, or indulging in sweets with The Cupcake Crew, her wonderful critique group.